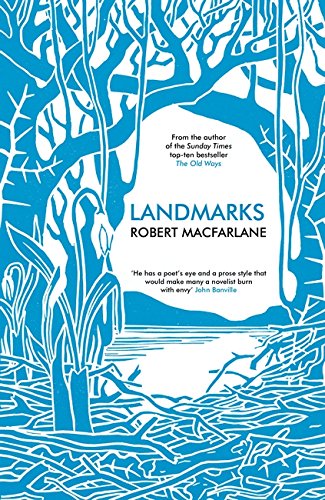 Robert Macfarlane is most often called a "nature writer," and I suppose that description is not inaccurate, though it leaves a great deal to be desired. One might also call him an essayist, yet that would not indicate the persistency with which his writing engages the unmade world about us: its hills and valleys, its streams and fields, its flowers and birds, its immensely various kinds of rock. His first book is called Mountains of the Mind (2003), and that perhaps indicates something about his orientation: mountains not as they may be in themselves but as they appear to a receptive consciousness, within which their forms constantly shift and alter. "Endless forms most beautiful," as Charles Darwin wrote in a rather different context; this is perhaps Macfarlane's constant theme.

In Great Britain no contemporary chronicler of the natural world is more celebrated, and Macfarlane deserves that eminence. (It is recently acquired: he has effectively inherited the mantle of the great Roger Deakin, who died in 2006 at the sadly early age of 63; Macfarlane was, fittingly, named his literary executor.) He writes elegantly, though without calling attention to his own prose: his preference is to alert us to what he sees. Reading his account of a walk in the Cairngorms or a visit with friends in the Hebrides, I am reminded of Auden's great line about people practicing their vocation: "how beautiful it is, that eye-on-the-object look."

Another of Macfarlane's virtues is his generosity to those who have gone before him, writers who taught him how to see the world first, and write about it only afterward. One of his masters—one of the two great ones, I would say, along with Deakin—is Nan Shepherd (1893-1981), who spent much of her life wandering in and writing about the Scotland's Cairngorms. Macfarlane's grandparents lived near the Cairngorms, and he knew them from childhood; but in another sense he was innocent of them until he read Shepherd's The Living Mountain (written in the 1940s but not published until 1977): "So I knew the Cairngorms long before I knew The Living Mountain. I first read it in 2003, and was changed. I had thought I knew the Cairngorms well, but Shepherd showed me my complacency. Her writing taught me to see these familiar hills, rather than just to look at them." Shepherd taught him, and did so solely through the power of her language: words and images, structure and syntax.

It is language, McFarlane reminds us—as we are constantly reminded by the writers who attend to place—that builds the vital bridge between the mountains out there and the mountains of the mind. And this bridge is the subject of his new book, Landmarks: a bridge made of words that mark the land, that fix it in mind and memory. "We are and always have been name-callers, christeners. Words are grained into our landscapes, and landscapes grained into our words. 'Every language is an old-growth forest of the mind,' in Wade Davis's memorable phrase. We see in words: in webs of words, wefts of words, woods of words. The roots of individual words reach out and intermesh, their stems lean and criss-cross, and their outgrowths branch and clasp."

Near the outset of Landmarks, Macfarlane describes a controversy that emerged only at the beginning of 2015, though it centered on something that happened in 2007, when a new edition of the Oxford Junior Dictionary appeared:

A representative of the press explained the ratonale for this decision: " 'When you look back at older versions of dictionaries, there were lots of examples of flowers for instance … that was because many children lived in semi-rural environments and saw the seasons. Nowadays, the environment has changed." A number of writers, including Macfarlane, protested this change, and one of them, the poet Andrew Motion, commented with some heat: "Their defence—that lots of children have no experience of the countryside—is ridiculous. Dictionaries exist to extend our knowledge, as much (or more) as they do to confirm what we already know or half-know."

This is true, but one might retort that there is little point in knowing the words for things one will never directly encounter. When one's environment changes, one's language will necessarily change accordingly; why decry the absence of words when what really matters is disconnection from the world and—if Macfarlane is right—an inevitable consequential disenchantment? Macfarlane's task in Landmarks is to reveal the ways that our daily encounters shape and form our language, which in turn clarifies and specifies our future encounters with the world. But this is a phenomenon that cannot be described, as I have just tried to describe it, in abstract and universal terms; rather, it is inevitably local in its manifestations. When one loses connection to a particular landscape, one loses the language appropriate to that landscape, and once the language has evaporated, one's vision blurs or one grows altogether blind.

As I read Landmarks I found myself again and again thinking of that great poem by Richard Wilbur, "Lying," and especially these lines:

Closer to making than the deftest fraud
Is seeing how the catbird's tail was made
To counterpoise, on the mock-orange spray,
Its light, up-tilted spine; or, lighter still,
How the shucked tunic of an onion, brushed
To one side on a backlit chopping-board
And rocked by trifling currents, prints and prints
Its bright, ribbed shadow like a flapping sail.
Odd that a thing is most itself when likened …

And the words we make up to describe our local worlds are a great likening, a likening that imprints on the mind the outlines of the world that stands right there before us. In this spirit each chapter of Landmarks describes an encounter with some person who has, and finds ways to share, an intimate knowledge of a particular corner of the world—Nan Shepherd's Cairngorms, Barry Lopez's Arctic, John Muir's Yosemite, and so on—but then goes on to offer a lexicon of what things are called in various places and times. Thus these entries under the category of "Wetlands":

One must live in a very different place than the one I live in (here in Texas) to have need of a word like amod. So on the Hebridean island of Harris and Lewis, where Gaelic landscape-words may still be found, Macfarlane learns that "a bealach is a gap in a ridge or cliff which may be walked through, but the element beàrn or beul in a place-name suggests an opening that is unlikely to admit human passage, as in Am Beul Uisg, 'the gap from which the water gushes.' " Macfarlane notes that "To speak out a run of these names is therefore to create a story of travel—an act of naming that is also an act of wayfinding"; and a native of the island refers to this extraordinarily specific vocabulary as "an early form of GPS: the Gaelic Positioning System."

Early in Landmarks Macfarlane quotes the great naturalist Oliver Rackham—about whom I have written in these pages, worshipfully—who has said that there are four ways a landscape can be lost: through "the loss of beauty, the loss of freedom, the loss of wildlife and vegetation, and the loss of meaning." Macfarlane is especially concerned with the ways that the loss of meaning can lead to the other three. He describes a controversy on Harris and Lewis about the plan to build a wind farm on one of the island's great moors:

It was in the interests of AMEC [the energy company making the proposal] to characterize the moor as a wasteland, a terra nullius. The metaphors used to describe the moor by those in favour of the plans repeatedly implied barrenness. One pro-farm local councillor dismissed the island's interior as 'a wilderness', suggesting a space both empty of life and hostile in its asperities … . If the pro-farm lobby charged the moor with an affective power, it was the capacity to depress and oppress the mind. The journalist Ian Jack, arguing in support of AMEC's application in 2006, described it as "a vast, dead place: dark brown moors and black lochs under a grey sky, all swept by a chill wet wind."

I have no doubt that if I were to see that moor—for the first time, and at some distance—I would agree with Ian Jack and the local councillor. It is only up close and over time that the distinctive features of a landscape or waterscape reveal themselves. The lack of intimate acquaintance and the lack of specific language reinforce each other; from this arises the "loss of meaning," and from that the other forms of loss accelerate and intensify.

One Lewisian, a man named Finlay MacLeod, said in the midst of the Brindled Moor controversy that "What is needed"—not so much to save the moor but to help people understand why it might be worthy of saving—"is a Counter-Desecration Phrasebook." The phrase strikes Macfarlane with great force, and much of Landmarks is an attempt to extend that insight to a much larger area than that of a single moor on a single island. "We need now, urgently, a Counter-Desecration Phrasebook that would comprehend the world—a glossary of enchantment for the whole earth, which would allow nature to talk back and would help us to listen." Given the essential parochialism of nature-language—"parochial" is a very positive word for Macfarlane—this may seem a quixotic if not self-contradictory quest. But really Macfarlane is simply offering a recommendation to all those who dwell, really and truly dwell, in any given parish of Creation to preserve, and if possible to extend, the language adequate to that place, that language that in turn preserves and extends meaning.

G. K. Chesterton once asked us to imagine "a fence or gate erected across a road. The more modern type of reformer goes gaily up to it and says, 'I don't see the use of this; let us clear it away.' " But to this, "the more intelligent type of reformer will do well to answer: 'If you don't see the use of it, I certainly won't let you clear it away. Go away and think. Then, when you can come back and tell me that you do see the use of it, I may allow you to destroy it.' " Robert Macfarlane's imagined Counter-Desecration Phrasebook is a verbal fence. It presses us to know a landscape before we think of abolishing it.

Alan Jacobs teaches in the Honors Program at Baylor University.