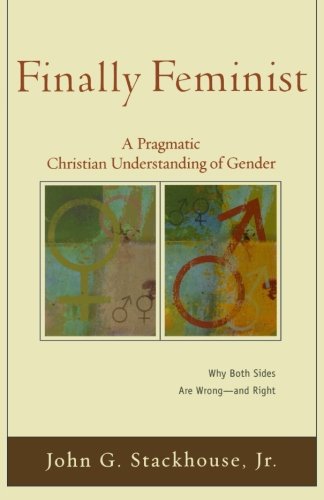 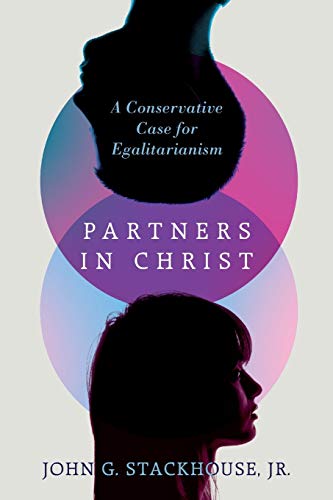 Editor's Note: Susan Wise Bauer decided to take a break from writing the history of the world (three volumes to date), so she took on a light subject: The Story of Western Science: From Aristotle to the Big Bang Theory. One of these days, or so I fondly hope, she will write another novel. Meanwhile, here's a guest column from the farm and publishing complex she presides over with her husband, who pastors a rural congregation in Virginia.

A decade ago, John Stackhouse sounded weary. "Aren't we 'done' with gender?" he wrote, in the preface to his 2005 study Finally Feminist. "Haven't all the relevant issues been raised, all the texts scrutinized, all the alternatives arrayed?"

In the newly revised and expanded edition of that same study, Stackhouse doesn't just sound weary; he's begun to sound slightly desperate. "Instead … of immediately consigning our opponents [in the gender debate] to the lake of fire," he implores, "let's remember Jesus. Let's remember that we love Jesus. Let's remember that we're trying to understand Jesus, and worship Jesus, and obey Jesus, and become like Jesus, and share Jesus the very best that we can … . Far too many discussions of gender have disappeared almost instantly down … slippery slopes into hellish excommunication." It doesn't help, he adds, to call each other "wicked or witless" or "immoral morons" (which suggests to me that his email over the last ten years has been less than edifying).

This is the context in which Finally Feminist has become the newly-titled Partners in Christ (InterVarsity Press); and even as he ably (and graciously) re-presents the core argument from Finally Feminist, Stackhouse seems to be showing the wear and tear of the last ten years of inter-Christian sniping.

That core argument, which I discussed in some detail in my 2007 Books & Culture review of Finally Feminist, has not changed. Scripture, Stackhouse writes, presents an intentional doubleness whenever the "radical freedom" that is ours in Christ ("freedom from law, freedom from social divisions, freedom from religious tradition, freedom even from the world, the flesh, and the devil") collides with social norms that have not been redeemed. In Christ, women have complete freedom to pray, preach, and otherwise serve the kingdom of God; but there are times and places in which the full exercise of this freedom might actually hinder the advance of that very kingdom. And in those times and places, Scripture suggests that we willingly curtail the exercises of our God-given liberties for the greater good: "[F]or the Christian church," Stackhouse concludes, "the question of gender is not just about gender … . It is about the kingdom of God—because everything is first and finally about the kingdom of God. And because everything is about the kingdom of God, then questions about gender need to be asked in this one, primary context: What will best advance the kingdom of God, here and now?"

In the patriarchal culture of the Roman Empire, the church had to be prudent about allowing women to exercise their freedoms: a temporary accommodation to an "unhappy reality," carried out to avoid unnecessary scandal and "for the greater good of spreading the gospel." But now, in a society which is "at least officially egalitarian," this temporary accommodation is no longer necessary. In fact, the church causes greater scandal and damage to the gospel by holding on to the gender roles of the past:

I am arguing that there no longer remains any rationale for the woman to remain in the once-expected role of dependence and submission … . When, under the providence of God and the ongoing, spreading influence of kingdom values, society opens up to the abolition of slavery or the emancipation of women, then Christians can rejoice … . The dark irony remains today … precisely in Christians lagging behind society and still requiring a submissive role for women—a posture that now is a scandalous mirror image of the scandal that egalitarianism would have caused in the patriarchal first century.

John Stackhouse is certainly not the only theologian making this argument, but he makes it well. Partners in Christ is clear and readable; the pattern of doubleness throughout Scripture is well developed in a series of chapters dealing with the entire biblical witness, from Genesis to Revelation; and Stackhouse addresses a comprehensive series of conservative counter-arguments, ranging from "Egalitarianism violates the pattern set for us by the Trinity" to "If women don't stay home, children will be neglected."

In fact, these conservative counter-arguments have apparently multiplied since 2005; they occupied a single chapter in Finally Feminist, but they sprawl across most of the entire second half of Partners in Christ. Which is where the wear and tear begins to show. Despite the repeated assertion that Western Christians now live in an egalitarian culture where the kingdom values of equality and freedom can be more openly displayed, Partners in Christ strikes me as a book that is digging itself back into a foxhole.

Nowhere is this clearer than in Stackhouse's apparent rejection of the term feminist, a word he boldly claimed back in 2005. "I here set forth," he wrote in the preface to the original book, " … a single, coherent paradigm that amounts finally to a Christian feminism." This passage is missing entirely from the current reworking. Instead, in a newly added passage, Stackhouse muses, "I wanted to be a feminist back before feminist became the 'f-word' that no decent person would use in public."

The f-word that no decent person would use. Clearly Stackhouse has his tongue more or less in his cheek, but just a few pages later, he uses the term yet again:

[T]he "f-word" … has become odious not only among many Christians but also among many people in society at large—even, and sometimes especially, among young women who might be presumed to be feminists … . [T]he word evokes now an ugly stereotype of lesbian misanthropes or perhaps wickedly alluring sexual predators who threaten the integrity of the family, sexual purity, masculinity, and yes, civilization itself, in the eyes of the most frightened. Many of my own university students could easily agree with almost any standard set of feminist tenets but would horrifiedly eschew the label. "I don't hate men!" a few have confided in me. "I'm no feminist!"

To do Stackhouse justice, he does his best to explain that feminism is not a choice between man-hating and man-eating. But his assumption that so many young women consider feminism a dirty word smacks of someone who has spent the last twenty years within the evangelical enclave—presumably fending off attacks from opponents who call him an immoral moron for his egalitarian stance.

Which is, perhaps, why the book has been renamed: from Finally Feminist to Partners in Christ: A Conservative Case for Egalitarianism. Stackhouse is no longer arguing, with the same fervor, that Christians should "celebrate any sort of feminism that brings more justice and human flourishing to the world—more shalom—no matter who is bringing it, since we recognize the hand of God in all that is good." Instead, he appears to be writing to conservatives—social conservatives, patriarchal conservatives—and in attempting to make himself heard, he has chosen (to some extent, at least) to accommodate their terms, their prejudices, and their definitions.

In that way, Partners in Christ seems like a retreat from Finally Feminist. I would be happy to pass the latter on to an unchurched friend who knows nothing about Christianity and doesn't understand why Christians are still talking about "women's roles"; Finally Feminist opens up the church's struggle with gender in a way that illuminates the Christian hope in the final triumph of the kingdom of God. Partners in Christ is a better fit for a Christian acquaintance who is staunchly patriarchal and believes feminism is a pathology. That's fine. We need to have conversations with both sets of folks. I just wish that we were all spending more time talking to the first group, instead of repeating ourselves to the second.