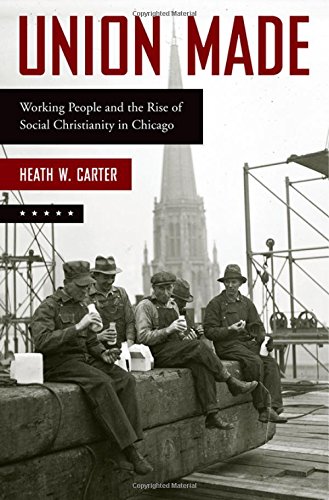 Christianity and the labor movement in Chicago.
July/August 2016

Few American religious history topics possess the social gospel's privileged place. A term to be memorized within the American history survey, claiming a seat at the scholar's "good religion" table, its prominence should make it a prime target for scholars to problematize. In key ways, however, the basic outline of the social gospel's development remains rooted in the 1940s narrative laid out by Charles Hopkins, Henry May, and others. They expounded the story that still holds sway, of a vanguard of middle-class pastors, professors, and reformers responding from 1880 to 1920 to industrialization and urbanization by calling on America's churches to apply Christian principles of cooperation and compassion to the social and economic order. By 1908, the social gospel had institutional support through the Federal Council of Churches in Christ, and although its postmillennial optimism suffered a setback from the Great War, it nevertheless carried on in seminaries, fashionable pulpits, and various denominational agencies.

To be sure, scholars since the 1940s have added an ever-expanding cast of characters to the list of social gospelers, including women, African Americans, agrarians, and businessmen. Some have found precedents in antebellum abolitionism, while others have highlighted the social gospel's connection to popular consumer culture. This diversity has made the term "social Christianity" more tenable for some than "social gospel" to represent the wide panoply of Christian reform responses to industrial capitalism, although the two are quite often used interchangeably.

Carter begins his narrative with a picture of antebellum harmony, a time when Chicago resided on the frontier, ministers lived in poverty alongside wage-earners, and simple frame buildings were good enough to be called a church: "A common faith in the dignity and destiny of free labor united the city's rich and poor Christians, who did not yet understand themselves to be, respectively, upper- and working-class."

Then industrial capitalism changed everything. Wealthy industrialists and merchants used ever-expanding riches to pay for magnificent church buildings and recruit refined clergy. Neighborhoods and church pews began to segregate based on wealth. In the years immediately following the Civil War, the bonds that linked Christian ministers and workers began to fray. In response, working-class believers like Andrew Cameron, a Scottish printer who founded the Workingman's Advocate in 1864, created what Carter deems "Chicago's first social gospel." With Bibles in hand, a cadre of "labor aristocrats"—mostly skilled, English-speaking workers—criticized the new industrial order and the churches' complicity in it. Importantly, they articulated their moral critique a full decade before social gospeler Washington Gladden ever took pen to paper in the pioneering Working People and Their Employers (1876).

These first expressions of a working-class social gospel came from a rather narrow constituency. But as labor organized and as class conflict erupted with more frequency, whether in Chicago's 1867 general strike, the Railroad Strike of 1877, or the 1886 Haymarket affair, the labor movement became a "hotbed of alternative Christianities." Carter is quite clear that labor was no monolith. The Central Labor Union had a more radical edge, with considerable anarchist influence. The Trades and Labor Assembly represented a conservative and native-born brand of labor reform, one more attached to Protestantism's established churches. Somewhere in between stood the Knights of Labor, who exploded in growth in the mid-1880s. Despite the divisions within the labor movement, Carter finds a general pattern: all brought a biblically based moral challenge to Christian churches' close connection with the city's industrial elite, and all promoted a "more egalitarian reading of the gospel, in which Jesus, a carpenter, stood in judgment over industrial modernity."

Not all wage earners joined the labor movement or supported social Christianity. In one section, Carter digs into the membership rolls of a Methodist church whose pastor rained holy fire down upon the rabble-rousers of the 1877 labor upheaval. Upwards of 240 wage earners perished in the violence, but in front of a sizeable blue-collar constituency the Methodist pastor lamented that the death toll was so low. Surprisingly, workers abided the incendiary statements of their pastor—Carter surmises that they united with their minister around a shared Anglo-Protestant identity. They knew that when their pastor denounced working-class radicals, he had in mind the foreign-born "mob" rather than respectable laborers who spoke English and avoided the saloon and the union.

Carter's careful exploration of the complex responses from pulpit, press, and pew allows him to get to the heart of Christian leaders' opposition to labor. The issue, put simply, was unionism. For all their praise of the dignity of the laborer and their attempts to maintain rapport with wage earners (attempts that met with some success), when push came to shove ministers from across the theological spectrum lined up on the side of the employers and in defense of the morality of industrial capitalism. If an exception to this pattern could be found before the 1890s it would have been from the Catholic churches. But even there heightened fear that radicalism might infiltrate labor unions balanced out Catholic priests' closer relationship with and greater sympathy for foreign-born laborers.

Church leaders could shrug off labor leaders' attempts to "Christianize" Christianity so long as their pews were not devoid of wage earners. But this seemed less certain by 1894. Carter shows that in one Chicago church, 20 percent of the members, nearly all working-class, departed during the Pullman Strike as a direct result of their minister's obnoxious praise of industrialist George Pullman. Most churches did not have a working-class walkout on the same scale, but perception motivated equally well. Despite an increase in urban Protestant church membership at the turn of the 20th century, reports at the time from muckraking journalists and church reformers warned of the working man's full-scale estrangement from the church. Vigorously "amened" by labor activists, these reports led church leaders to pay more attention to working-class voices, picking up on social gospel ideas that had been articulated by labor leaders since the 1860s. With new denominational programs built to address "the social question" and church leaders' guarded support for the conservative labor platform of the American Federation of Labor, by 1908 the middle-class social gospel had arrived.

Carter has a knack for placing his big argument—recasting the history of social Christianity—at the intersection of a variety of subdisciplines. Among historians of American religion, scholars of the social gospel will be joined by a burgeoning group looking at "religion and labor" or "religion and capitalism." Carter's book does not entirely transform the Hopkins and May paradigm—it develops along similar chronological lines, focuses on the same issue of industrial capitalism, and has the inherent limitation of focusing on one city—but Union Made significantly advances the conversation. As for whatever limitations the one-city approach brings, in Carter's hands it also proves to be a source of strength. Neighborhoods, church buildings, and on-the-ground interactions all become part of his argument, giving flesh and blood to the theological articulations of labor activists and church leaders.

Christians sympathetic to progressive economic views and labor activists praying for a labor movement revival will be inspired by Carter's account of Bible-believing workers criticizing an unjust economic order. This may not be the book to make a big splash outside the academy—Carter's careful historical arguments, developed under the mentorship of Mark Noll, are a bit too specialized and too confined to Chicago—but Carter is already at work on a more sweeping and ambitious account of the American social gospel. I suspect this will not be the last time his name graces these pages.

Paul Emory Putz is a graduate student in history at Baylor University.