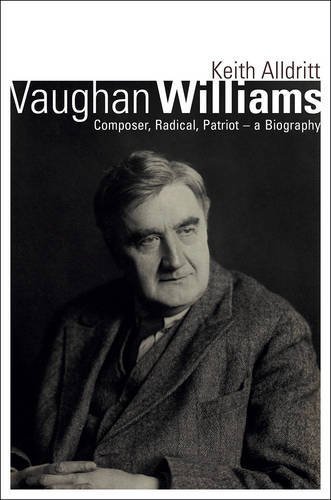 But Alldritt is, nevertheless, keen on avoiding a purely musical biography. Alldritt is more interested in, and more attentive to, the personal turmoils in the life of a man who otherwise came to symbolize English music with an outwardly unruffled and avuncular spirit. As Alldritt makes clear, there was nothing unruffled about Vaughan Williams' ascendance. The polite scorn of his family made him ruthlessly self-deprecating.[3] Few of his larger works escaped relentless editing and re-editing, no doubt to the despair of his publishers.

On the other hand, this enforced humility also bred in Vaughan Williams an aversion to the sort of snotty modernism being assumed by the following generation—Benjamin Britten, Michael Tippett, William Walton—who were eager to dismiss Vaughan Williams as nothing more than "a nice man." He took offense at some "young exquisite" who sniffed at Bach for being "so bourgeois." Vaughan Williams retorted that "being bourgeois myself I considered Bach the greatest of all composers":

It is Bach's intense humanity which endears him to me and my fellow bourgeois. The proletarians (if there are any in this country) would be too much preoccupied with their wrongs, and the 'governing classes' (if indeed they existed outside the imagination of the New Statesman) would be too much occupied in preserving their rights to have time to be human.

In an essay defending Gustav Holst, he scorned modernists as would-be bohemians, "pretending you like absinthe and keeping a mistress in Montmartre."[4] Alldritt retails a marvelous anecdote about a meeting Vaughan Williams had in London with Norman Peterkin of Oxford University Press. Walton showed up for an appointment with Peterkin, and loudly asked the office staff whether "the old buffer is going to monopolise him all morning." As Vaughan Williams was leaving, he apologized to Walton for keeping him, and Peterkin subsequently learned that the staff thought "VW was far nicer to W. than W. was to him, and W. is not considered to be a gentleman I gather!"

Vaughan Williams danced the same pattern in politics, which Alldritt makes a significant part of his story. The Wedgwoods were resolutely Liberal in politics in an evangelical and Gladstonian way, and the young Vaughan Williams went up to Cambridge reading Fabian tracts and resolutely announcing himself as a socialist. This was the socialism, however, not of Marx nor even Lloyd George, but of a vague classless pre-industrial communalism, more backwards-looking and wistful than progressive, and more gypsy than bohemian (something which shows up in spades in Songs of Travel and Hugh the Drover). So, when World War I broke out, he had no hesitations about enlisting in the Royal Army Medical Corps (he was too old for front-line combat) and spent the entirety of the war in France, Greece, and England. As much as he liked to tell people that he always voted "either Radical or Labour," he called down a pox on both houses during the General Strike, and in the climactic 1945 elections voted Conservative. He balked at solicitations from left-wing festival organizers: "I do not care about mixing propaganda and art," he tartly informed the promoter of the Festival of Music for the People in 1939, "and I do not quite see that the people who hold particular views should arrogate to themselves and none others the title of 'Workers.' " Still, he refused a knighthood, and intervened during World War II to protect a pacifist (Michael Tippett) and an outright communist (Rutland Boughton) from official harassment—even while adding that "I am strongly opposed to them." Something in Vaughan Williams yearned (like the character of Proclean in the incidental music he wrote for The Wasps in 1909) for escape; something "bourgeois" invariably pulled him back. If he had been an American, he would have dreamt of running away to the circus or the sea.