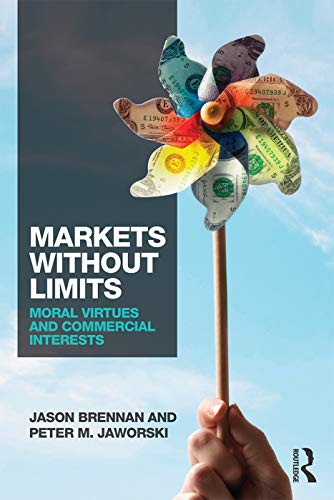 “There is nothing free except the Grace of God.”
July/August 2016

In the opening book of Wealth of Nations, Adam Smith observed that the division of labor, perhaps the central phenomenon driving economic development, "must always be limited" by the extent of "the power of exchanging," or, "in other words, by the extent of the market." Here Smith was primarily pointing to the numbers of people or geographic limits of the market. The more people and nations that could exercise the power of exchange, the more the market would facilitate specialization and the division of labor.

Where Smith focused on what might be called the quantitative limits of the market, more recent economic thought has often focused on the qualitative limits of the market. Rather than simply worrying about how those in developing nations might be connected to global circles of exchange or how nations might more efficiently trade goods and services across and within national borders, Nobel Laureate in economics George J. Stigler described economics as the "imperial science." The imperialism of economics consisted not so much in that the market would be extended to cover the peoples and nations of the earth, but in that all aspects of the lives of peoples and nations would be explained in economic terms. "The very nature of economic logic invites a sweepingly wider application of economic analysis to social phenomena," said Stigler.[1] Where classical political economists had tended to exclude institutions like the family, for instance, from the scrutiny of economic analysis and instead merely assumed their existence or relegated their study to other disciplines, later economists like Stigler and Gary Becker applied economic models, particularly rational choice theory, to a wider and seemingly limitless variety of "social phenomena."

Markets Without Limits: Moral Virtues and Commercial Interests, by Jason Brennan and Peter M. Jaworksi, can be seen as broadly continuous with these trends as it seeks to show that there are no qualitative or, as the authors put it, "inherent" limits to markets. Most of the legitimate limitations that we often think of for markets are actually, they argue, accidental or contextual limits to markets. These "incidental limits to the market" are "cases where particular people should not sell particular things—things that normally would be permissible to sell—because of special circumstances, such as that they promised not to sell those items, or the items will be dangerous in these special circumstances, or because they have pre-existing duties that require them to do something else other than engage in buying and selling". To the extent that there are legitimate limits on the markets, the authors contend they are of this variety.

Perhaps the authors would simply class religious objections to markets in certain goods as types of superstitious "taboos."

By contrast, "inherent limits to the market," in which cases "there are some things that people are normally allowed to own or possess in some way, but which should not be for sale," are fictive. The central argument of Markets Without Limits turns on precisely this distinction: "Our thesis in this book is that if you can give something to someone, then you can normally sell it to that person. If you can take something from someone, then you can normally buy it from that person. There are no inherent limits to markets."

The authors proceed to explore and apply this claim to a wide variety of circumstances, drawn both from the real-world and from more speculative thought-experiments. The moral motives of the study are clear. The authors believe that the lack of markets in certain areas in our world today unjustly and unnecessarily causes privation, suffering, and death. As intriguing as some of the more fantastic examples might be, "At the end of the day, we'll be talking about whether couples can have children, about whether we should use the best methods available to predict terrorist attacks, or whether sick people live and die. This book is an entry into an academic debate, but it's not merely an academic debate. How we answer these questions matters." The moral concern over the human cost due to the lack of market mechanisms for kidney transplants, for example, comes through again and again in this study.

Markets Without Limits is a rigorous, accessible, and thoroughly edifying exercise in what might be called economic, or even utilitarian, morality. The thesis, that if you can legitimately have it then you can legitimately sell it, is deceptive in its simplicity and ingenious in its elaboration. The way the argument is constructed allows Brennan and Jaworski to distinguish between markets in things like child pornography and nuclear weapons and markets in things like kidneys and drugs. They would oppose markets in the former cases not because of the problems of markets themselves, but because those are the kinds of things that should not be possessed at all. It thus wouldn't be legitimate to give them away either.

One of the critical features of argument, as the authors progress through various forms of opposition to their thesis, whether on the basis of semiotic meaning and interpretation ("money communicates commodification"), corruption ("markets change incentives"), or disgust ("markets in certain things are disgusting"), is the nuance with which markets are defined. On one level, defining "markets" as the phenomenon "without limits" is relatively simple and straightforward: "A market is a relationship where the mode of interaction is consensual exchange. Broadly speaking, a market is the voluntary exchange of goods and services for valuable considerations." At another level, however, the authors argue that markets can be constructed in nearly limitless ways. Markets need not, for instance, use direct exchanges of cash, although in many places the authors seem to simply identify markets with money. With variations in terms of participants, means of exchange, price, distribution, and others, Brennan and Jaworski note that there are actually at least 2,187 (!) different forms a market could take. Perhaps there are only a few of these varieties that a legitimate market in a particular good or service might take, but that is all the more reason for paying careful attention to the design of such markets. Thus, "it might be that a market in kidneys is permissible only on very specific 'settings,' but that market might still be a wonderful market, one that does far more good for the world than most other markets."

A great strength of this book is the logical rigor of its conclusions. I found myself trying to come up with examples that would be exceptions to the authors' thesis, but either failing to do so on their terms or finding that my examples or close analogues had been dealt with. The limits of this book on the legitimate limits of markets, however, arise from its myopic moral frame. The authors, for instance, simply assert that markets in sex between consenting adults are morally acceptable because sex as such is acceptable. It may be, however, that the correct "market" setting for sex is covenanted, monogamous heterosexual marriage within which we experience what John Paul II described as "a mutual gift of self." We wouldn't know this, however, simply from the inherent logic of economic morality.

A large lacuna of this study thus has to do with the sources and groundings of moral judgment, on what basis we may determine whether it is legitimate to possess or own something in the first place, much less trade or sell it. As the economic historian Deirdre M. McCloskey has put it, "A theory of moral sentiments beyond utilitarianism requires stepping outside economics. You can see it better there."[2] Although the book touches upon some religious themes, religion as a source of morality is essentially ignored. Perhaps the authors would simply class religious objections to markets in certain goods as types of superstitious "taboos," which they do reject explicitly as "unjustified."

Although I do think there are moral limits that are significant for defining the particular ways in which markets in certain goods need to be constructed, a larger lesson of Brennan and Jaworski's book has to do with the inexorable logic of merely immanent or humanitarian considerations. Without grounding economic morality within a transcendent—indeed, divine—frame, it is difficult to see how to escape the imperial logic of unlimited markets.

The authors provide us a hint at a way out, however, when they deal in passing with the topic of simony. On their definition, simony amounts to the sale of ecclesiastical offices, which in fact is one of the forms that simony can take. But the origin of the sin in its biblical setting is far more instructive. In Acts 8, Simon Magus offers to buy the Holy Spirit from the apostles, and in turn is rebuked by Peter: "May your silver perish with you, because you thought you could obtain the gift of God with money!" As we read in Charles Portis' novel True Grit, "You must pay for everything in this world, one way or another. There is nothing free except the Grace of God. You cannot earn that or deserve it." From a Christian perspective at least, that is a truth that should transform and reorient our understanding of the legitimate although limited role of markets in human society.

Jordan J. Ballor is a senior research fellow at the Acton Institute for the Study of Religion & Liberty in Grand Rapids, Mich., where he also serves as executive editor of the Journal of Markets & Morality.