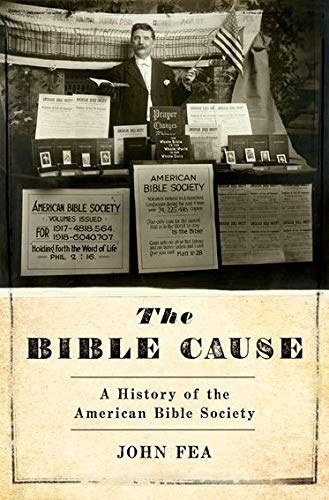 "Letting the Bible Do Its Work"

A history of the American Bible Society.

In 1956, my father, Theodore Thuesen, was a newly ordained pastor in the American Evangelical Lutheran Church, a small denomination founded by Danish immigrants. Because his parish was in Newark, New Jersey, the denomination asked him to be its representative at the annual meeting of the Advisory Council of the American Bible Society in New York City. A photo taken at that event shows him, then just 28 years old, with the other 73 delegates, most of them older, representing 50 Protestant denominations. All the people look dressed for church—the men in suits, many of the women wearing hats. The photo bespeaks the ABS's aim at midcentury to bring all the mainstream denominations (within Protestant confines, though Catholics and Orthodox would be added in later years) under its ecumenical umbrella.

Fifty-seven years later, in 2013, the ABS invited me to a meeting as a historical consultant for a proposed exhibit on the Bible in America. By then, the Society had moved from 450 Park Avenue (its home from 1936 to 1966) to 1865 Broadway, a prime location near Columbus Circle. Hoping to entice passers-by into its renovated, street-level atrium, the Society had installed flat-screen TVs to show an endless loop of scenes from the evangelical miniseries The Bible (2013). The atmosphere there during my visit, with young New Yorkers sipping coffee and browsing smartphones under digital images of a cinematic Jesus, struck me as radically different—more edgy in a nondenominational, evangelical sort of way—from the picture of my father in 1956 at what might as well have been an assembly of the National Council of Churches.

John Fea captures this transformation perfectly in his meticulous, deeply researched account of the American Bible Society, published to coincide with its 2016 bicentennial. Though organizational histories can be "chloroform in print" (to borrow Mark Twain's description of the Book of Mormon), Fea draws on correspondence and other ...