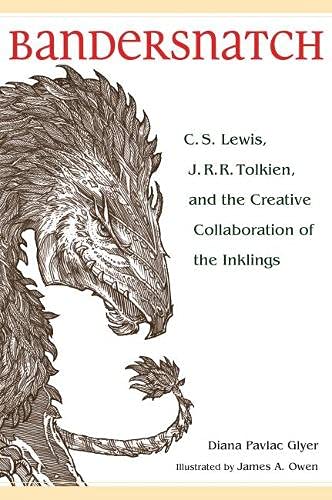 The practice of creative collaboration.

Those who have been bandersnatch-hunting know that it is a challenging sport. You need a vorpal sword; you need a conveniently located tum-tum tree under which to stand in uffish thought; and you need a valiant steed on which to go galumphing back. Diana Glyer is a seasoned hunter. She has caught the questing beast, and it turns out to be tame and useful once brought home. Who is her bandersnatch? None other than J. R. R. Tolkien—but also other writers who claim to have worked alone but were really shaped by the communities in which they worked. Now Glyer has produced a beautiful little book, gloriously illustrated with hunt-the-bandersnatch pictures by James A. Owen, so that all artists and writers who want to be in creative community can hunt and catch bandersnatches of their own.

In a letter to Charles Moorman in 1959, C. S. Lewis wrote: "No-one ever influenced Tolkien; you might as well try to influence a bandersnatch." When Glyer read these words, she found them hard to believe. Lewis and Tolkien met bi-weekly for over 20 years, reading their works aloud. Surely there must be documentary evidence that Lewis did influence Tolkien's writing strongly, and vice versa?

In 2007, Glyer published a game-changing scholarly study, The Company They Keep: C. S. Lewis and J. R. R. Tolkien as Writers in Community (Kent State Univ. Press). It established once and for all, in meticulous detail, that Lewis, Tolkien, and the other Inklings did indeed influence one another in profound ways. Glyer shows how regularly they commented on work-in-progress, and how they often revised to incorporate suggestions.

Tolkien sent Lewis a draft of an early version of what would become The Lay of Leithian, for example; Glyer presents a convincing case that Tolkien was nervous about baring his soul in this way, and that a critical response by Lewis could have shut down the friendship and hindered Tolkien's growth as a writer. But Lewis's reaction was enthusiastic, and when he later provided ...