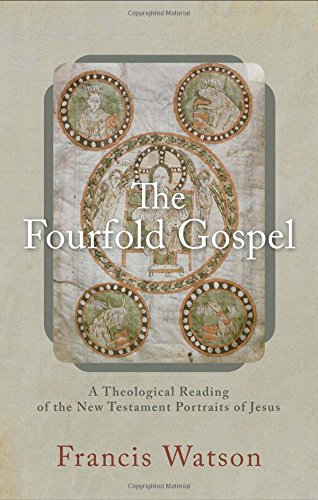 Francis Watson on the "fourfold Gospel."

During the period when Augustine was composing his monumental De Trinitate, he occasionally set that project aside to work on others. (A "productive procrastinator" he might be called today: when one project loses appeal, occupy yourself with another—so the management books instruct us—until motivation reemerges to continue with the first.) One of these interim projects, completed around the turn of the 5h century, became the book De Consensu Evangelistarum, or as we know it in English translation, The Harmony of the Gospels. Augustine's aim in this book was to account for the unity of the four canonical Gospels of the New Testament in such a way that each of their distinctives was recognized and explained. Or, putting it the other way around, Augustine wanted to show how the uniqueness of Matthew, Mark, Luke, and John did not impede the Christian confession of their basic agreement.

The contents of Augustine's book are varied and unfailingly stimulating, in part because he cannot escape discussion of thorny minutiae. Augustine notices, for instance, that in the Gospel of Matthew, when John the Baptist hails Jesus as the long-expected one, he describes his own relative lack of honor thus: "I am unworthy to carry his sandals" (Matt. 3:11). This is different from Luke's account of the same scene. In Luke—whom Augustine takes to have built on Matthew—John the Baptist says, "I am not worthy to untie the thong of his sandals" (Luke 3:16). Faced with this contradiction, "[i]t is reasonable," says Augustine, to pose the question what it was that John declared himself unworthy to do—whether to bear the shoes or to unloose the shoe's latchet." The way Augustine answered this question would shape the church's thinking about the diversity and harmony between the Gospels for centuries to come.

His solution to the puzzle was to posit two possible scenarios. On the one hand, the Baptist may ...