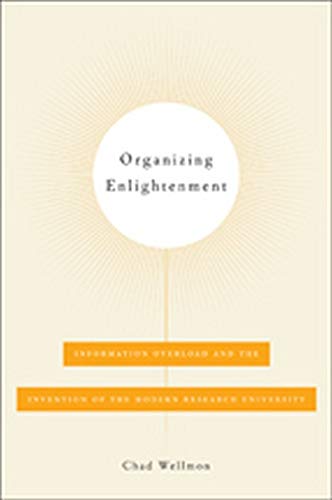 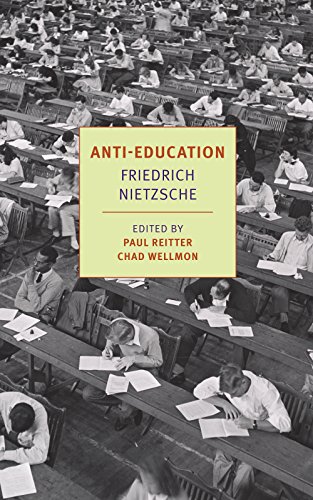 The dream of Schelling, Fichte, and the others was to create a university (virtually from whole cloth) that through its dedication to the Wissenschaften would become an environment in which genuinely virtuous character could be formed. No longer would the young men of Germany go to university for merely social purposes; no longer would they be the passive consumers of print, without form and void, like the chaotic world of books and magazines and newspapers. In the sophisticated, complex technology of the new universities the future of the German people would be forged.

In addition to writing Organizing Enlightenment, Chad Wellmon has also recently edited, along with Paul Reitter, a series of early lectures by Friedrich Nietzsche: Anti-Education: On the Future of Our Educational Institutions. This is a curious document, but one that illuminates some of the directions Nietzsche's thought would later take—and also gives us a glimpse at the German university half-a-century after its reinvention.

It is a work whose thought is difficult to assess because it is essentially a dialogue and was never completed. Nietzsche distances himself in curious ways from what is said in the lectures: he begins by imagining a narrator, a young man, still a student—though only a few years younger than Nietzsche himself, who was 27 when he delivered these lectures. And the narrator, though he occasionally expresses himself, chiefly records a set of long, agitated speeches an elderly philosopher makes to one of his young disciples. It certainly possible that Nietzsche dissents from at least some of what the philosopher says, though none of the characters in the dialogue dissents in any major way. Perhaps if Nietzsche had been able to complete the series of lectures some challenge would have been mounted by someone: near the end of the fifth lecture new figures are about to appear on stage.

But all this is speculation. Moreover, some of the old philosopher's key ideas are developed in more intellectually vigorous, more subtle, and less bombastic form in an essay Nietzsche wrote just two years later, "Schopenhauer as Educator." So I think the best provisional hypothesis is that the ideas of the philosopher in Anti-Education are substantially Nietzsche's own, though they would later undergo refinement.

We may summarize those ideas as follows: first, a fierce distinction must be made between education as it is practiced in 19th-century Germany, including what goes by the name of "classical" education, and genuine Bildung. For Nietzsche, Bildung certainly involves personal formation and the establishment of noble character, but is also closely connected to the ability genuinely to encounter civilization in its best and most challenging aspects.

What typically went by the name of education, by contrast, was an endeavor willing to "give up its own highest, noblest, and loftiest claims and content itself with serving … the state." And what does the state want from its educational institutions? "As much knowledge and education as possible—leading to the greatest possible production and demand—leading to the greatest happiness: that's the formula. Here we have Utility as the goal and purpose of education, or more precisely Gain: the highest possible income." (To anyone who teaches in an American university today this will be a familiar refrain indeed. And it is not just outsiders who chant it.)

This "servitude" is something that must happen at the social as well as the individual level. The student, but also the German culture as a whole, must submit to a threefold authority: that of the "need for philosophy," that of "the instinct for art," and that of "the standard of Greek and Roman antiquity." If this triple obedience can be achieved by more than a handful, then something can be achieved that the philosopher greatly desires: the full flowering of the "German spirit" (deutschen Geist, a phrase that appears more than a dozen times in the lectures)—which is a very different thing than the growth and European dominance of the new German state.