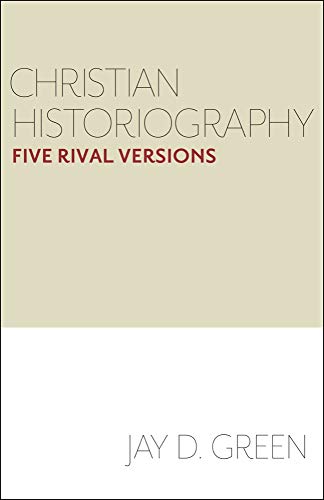 5 Ways to Write History as a Christian

There is no such thing as the Christian approach to history—a definitive, universally applicable method for historians to practice their craft "Christianly." And according to Jay Green—himself a Christian and a historian—that is not necessarily a bad thing. Green's taxonomy of five approaches—developed over a decade of teaching historiography to undergraduate history majors—seeks to capture the various ways in which self-consciously Christian historians have interpreted the past in light of their faith. Green devotes a chapter to each model, introducing key principles and practitioners (both at the professional and popular level), and then identifying the faithful insights of each approach while also critiquing limitations and blind spots.

The first model is more of a mindset than a discrete historiography: historical study that takes religion seriously. Most historians of religion today are Christians. While this does not necessarily give them special insights, it can produce a strong bond of identification that implicitly bears witness to the faith. Historians who exercise faith in their personal lives are more inclined to treat belief and experience as something genuine, knowing that historical reductionism does not account for all of reality.

In the second model, historical study involves application of background faith commitments. Green highlights here the work of Mark Noll and George Marsden: "If there has been an 'evangelical school' of historiography since the 1970s, these two clearly sit at its wellspring." Noll's contribution to the historiography debate has been more theological and occasional, while Marsden's has been more philosophical and systematic. Both view history through the lens of their Christian faith, acknowledging that background faith commitments influence their scholarship while continuing to play by the rules of the academy, marshaling publicly accessible evidence that can be scrutinized and evaluated by those outside the faith.

In the third model, the historian approaches the task of history as an application of Christian ethics. History is viewed as a form of moral inquiry and an expression of moral philosophy, with a view toward restoring American virtue and advancing Christian values. There is a greater span of ideological diversity in this chapter than in all the others, since Christians on both the Left and the Right have practiced this value-laden historiography—united in their instrumentalist methodology even as they disagree on the moral foundations and means to achieve their ends.

The fourth model views history as a form of Christian apologetics. Whereas the other models all affirm the truth of the Christian faith, historians in this category seek to demonstrate these truth claims. The uniting principle among various practitioners—from the notoriously irresponsible (like David Barton) to the reasonable and respected (like Rodney Stark)—is to vindicate the Christian faith, either by showing its historicity or by tracing its successes. The cultural and intellectual benefits of the faith are proffered as evidence for its veracity, while showing the negative results when its principles are undermined or ignored.

Finally, Green examines the view of history as a search for God. All Christians affirm that God makes, owns, knows, and guides all things according to his desires and for his good purposes. But the providentialist historian assumes a necessary connection between this doctrine and its application to ordinary events (those not recorded in Scripture), finding history filled with evidence of God's purpose and plans.

While the subtitle promises Five Rival Versions, a more clunky but accurate descriptor would be Five Sometimes Overlapping but Often Contradictory Versions. After all, each of these models, not just the first one, seeks to take religion seriously. Historians who seek to trace the hand of God in history also tend to see the cultural achievements of Christians as vindicating the reality of the faith. But this is not a complaint: Green's taxonomy is a pedagogically helpful way to cluster a wider variety of work.

There is a logical development in Green's presentation, moving from the least controversial to the most contested, from those perspectives that essentially represent his own approach to those he judges least legitimate, and from those most accepted in the secular academy to those that are usually rejected. The model of taking religion seriously receives virtually no criticism, since no Christian would object to this idea. And the problems with the evangelical-worldview approach are largely articulated through the critics of Marsden, whether Christian or not. The payoff in the book comes when Green offers his own evaluations of the third through fifth historiographical approaches.

Green's criticisms are most pointed when it comes to the models of history as apologetics and history as providential interpretation. At first blush Christians may be hard-pressed to think of any drawbacks to doing history as a way to demonstrate the faith. After all, if Christianity is true and if it truly changes lives, then shouldn't Christian historians be eager to highlight the evidences that confirm this belief? But Green cautions that this approach invites—and at times even requires—historians to stretch the historical evidence in order to fit with the results they expect. Not only does it tend to ignore the complexity of the human experience but its assumptions are misguided: "Christianity does not require a record of worldly success or cultural sponsorship in order to vindicate itself to the world."

But Green reserves his strongest criticism for the providentialists. Though he clearly affirms his belief in divine providence and acknowledges the desire to see the hand of God in history, he also writes that there is little in this historical method worth salvaging. Suggesting that the problems are too many to enumerate, he summarizes his central concerns by stating that providentialism is practically impossible and theologically impermissible. It assumes too much about human knowledge, underestimates the inscrutability of God, downplays the mysteriousness of divine purposes, and fails to adequately distinguish between ordinary or general providence and extraordinary or special providence. Green ultimately concludes that providentialism may not even be a historical method at all, but rather a crudely effective rhetorical strategy for worldview maintenance.

Green's arguments should be seriously considered by any Christian, especially those who assume that providentialism is self-evidently true and that the only justification for not using it is the idolatrous quest for academic respectability among secular peers. Too many books of Christian history, especially at the popular level, are written as if God's specific purposes are self-evident in particular events and as if there are no limits to what interpreters in a fallen world can know of God's revelation outside of Scripture.

While I am sympathetic to Green's arguments, they leave me with some questions. First, would his convictions about the limitations of human knowledge and the inscrutability of divine action prevent him from offering tentative interpretations of God's providential purposes even in the history of his own life or in the lives of his family or students? If not, might it be possible for the Christian historian to offer tentative interpretations of God's work in ordinary history, with appropriate qualifications? Green might respond that the audience and the public nature of history writing and the complexity of the situations and the standards of evidence are all different. Or he might respond that this is the job of the theologian and not the historian. Or he might respond that such an approach would not be acceptable in the wider academy, thus limiting the historian's opportunities. All of these would be valid responses, but they do not really feature in his categorical critique. When reading this chapter I wondered how Green might respond to someone like David Bebbington—a Christian historian widely respected among his secular peers—who argues that the Christian historian "should take providence into account."[1]

Second, does Green's analysis imply that all Christian attempts to explicitly incorporate providence into historical accounts are inherently problematic? There are a number of respected historians who affirm a role for providential interpretations in historical study, shaped in part by the calling of the historian and the makeup of the audience being addressed.[2] Bebbington suggests that "a providential framework should be more explicit in some pieces of writing than in others." And yet, "there is sometimes a need for the providential framework of history to be portrayed without reserve. For the church, it provides the encouragement of knowing that hitherto the Lord has helped his people."[3] While Bebbington believes that "the Christian historian is not obliged to tell the whole truth as he sees it in every piece of historical writing," he seems to open the door for a chastened audience-dependent providentialism, which Green does not directly address.[4]

Green concludes his study by laying out his own prescription for how Christians should think about the task of history, arguing that it should be viewed as one of many legitimate callings from God. As a vocation, historical study is of sacred significance, with tasks and duties ordained and directed by God. Should this then be seen as an additional sixth "version" of Christian historiography? Perhaps, but Green suggests that "'Christian vocation' is better thought of as the vital thread that knits together all of the various 'versions' of Christian historiography covered in these pages into a broad tapestry of noble, valuable, yet always flawed work done in God's service."

This book is a remarkable achievement. Green has seemingly read all of the relevant literature over the past several decades and packaged it in such a way that it is equally valuable for the undergraduate history major and for the Christian who wants to think through the various approaches to appropriating the past. Every discipline in the liberal arts deserves a book of this caliber. And if it is true, as Green suggests, that most Christian historians are largely indifferent to the relationship between history and Christianity, then perhaps it will prove to be most useful to those who already practice the craft, as they consider how to fulfill their calling in a more self-consciously Christian way.

Justin Taylor is executive vice president of book publishing and the publisher for books at Crossway in Wheaton, Illinois. He and Thomas Kidd are the co-founders of the "Evangelical History" blog, hosted by The Gospel Coalition.

1. David Bebbington, Patterns in History: A Christian Perspective on Historical Thought, reprint ed. (Vancouver, BC: Regent College Press, 1990), p. 173, my emphasis. "The Christian … is aware of divine activity not only in the world but also in his own life. Personal experience of the intervention of God inclines him to discern it in the world as well."

2. I am thinking here of the "dual practitioner" identification that Harry Stout (himself a critic of providentialists and a recipient of their criticism) mentioned in these pages some years ago: "I am both a professional historian and a Christian historian, a dual practitioner sometimes emphasizing one or the other without ever wholly neglecting either." Harry S. Stout, "Biography as Battleground: The Competing Legacies of the Religious Historian," Books & Culture, Vol. 2 (July/August 1996), p. 10. For recent defenses of this both/and model, see Andrew Atherstone, "Hagiography and History," in Truth at Any Cost: Papers Read at the 2012 Westminster Conference (Stoke-on-Trent, England: Tentmaker Publications, 2013), pp. 40-60; Ian Clary, "Evangelical Historiography: The Debate over Christian History," Evangelical Quarterly, Vol. 87 (July 2015), pp. 225-51; Nathan A. Finn, History: A Student's Guide, Reclaiming the Christian Intellectual Tradition, ed. David S. Dockery (Crossway, 2016), Ch. 3, "Faith and the Historian."

4. Ibid., p. 187. "Even when a piece of history has been shorn of specific Christian allusions, the Christian vision of history can still have shaped its composition. The task can be conceived from the beginning as an investigation of the historical process under God's control although no reference is eventually made to his activity. The final version will still be entirely consistent with the Christian view of history. What is written will be a distinctively Christian product, but the Christian content will be implicit rather than explicit. If the same piece of history is needed for a Christian audience or to vindicate a Christian position, reference to providence can readily be restored. The Christian historian can discern God at work in the past without necessarily writing of him there."