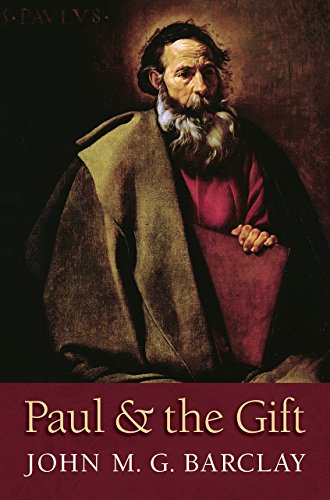 An illustration of the apocalyptic approach to Paul is seen in this statement by Barclay: "Thus, the Christ-event is not simply a stage in Israel's history, even its final stage; it is the moment that gives meaning to the whole." I would not just quibble with that way of framing the matter—who says "simply a stage" or "simply … its final stage" and who denies it "gives meaning to the whole"?—but such is the focus of the apocalyptic Paul: a massive act of God invading the cosmos in the Christ-event to liberate it from the grip of sin and systemic evil. One learns to read the Bible by letting the Christ-event turn everything inside out. Barclay's view of grace, however, is not tied exclusively to this model, and at time transcends all three orientations to Paul, so Paul and the Gift will be of value to all interpreters of Paul.

At the heart of both Christian and Pauline theology is the theme of grace. Where the "old" emphasizes grace as God's unmerited gift to rebellious and proud sinners, the "new" focuses more on grace as God's goodness to embrace both Jews and Gentiles in redemption, though most also mix into this expansion of God's people the theme of unmerited grace. But grace is even more emphatic, to the point of universalism at times, for the apocalyptic Paul interpreters. Taking each of the orientations to task, Barclay stands grace on entirely new ground. In fact, all will have to meet his challenge that grace's meaning has been reduced and assumed rather than articulated in nuance. As he puts it, "Considering the centrality of this matter for the comprehension of Paul and of other Second Temple Jews, it is surprising how rarely the definition of 'grace' has been subject to careful analysis."

What is perhaps most notable about this understanding of grace in Paul is the social focus Barclay gives it.

I shall proceed straight to the central contribution of Paul and the Gift. There are, Barclay contends, six different "perfections" of grace, by which he means six ways grace as gift works itself out toward extremes or its farthest point in meaning and implication. Those six perfections are superabundance, singularity, priority, incongruity, efficacy, and non-circularity. These perfections need his clarifications, for the whole book gains its vision from these terms:

We have noted the tendency to draw the theme of gift/grace to an end-of-the-line extreme, especially for polemical purposes and in relation to God; and we have observed the variety of forms that this "perfecting" tendency can take. Since gift-giving is a complex social relation, it is possible to "perfect" grace (to define its essence in some "pure" or "ultimate" form) in a number of ways. We have identified six possible perfections:

As he will later articulate, Barclay's perfections of grace operate from different angles: the first is about the gift itself; the second and third about the giver (God), the fourth about the person to whom the gift is given, the fifth about its effect, while the last is about reciprocation. These perfections then illustrate the varied dimensions of a phenomenology of the gift.

Three implications of nuancing grace into these six perfections can be detailed. I begin with a general implication for understanding how to relate the six perfections of grace. Each of the perfections is grace; each can exist without the others; grace, in other words, is not always one or all the others but can be one of them or a mixture of various perfections. Thus, it is simply unfair to the ancient Greco-Roman and Jewish worlds to think it is only grace when it is superabundance and incongruity and non-circularity, and here Barclay has his eye on certain exaggerations—prominent today in church life in the US—in Lutheran and Reformed theology. One can call it grace if it focuses on God's superabundant gift even though at the same time it is "circular," that is, if it expects the one to whom the gift is given to reciprocate somehow. Barclay establishes this point about grace and reciprocation on the basis of a phenomenology of gift from modern anthropology, on the basis of how Roman, Greek, and Jewish cultures worked when a gift was given, and on the basis of two Pauline letters, Galatians and Romans. The singularity of grace, quite attractive to some today under the category of "unconditional" love, tends to co-exist with the perfections of priority and non-circularity, while incongruity and efficacy are for some advocates downplayed for a modern age obsessed with self-esteem and microaggressions. It might be said that the "old" perspective tends to think grace is superabundant, prior, incongruous, and non-circular—and if these are not present or if anything else is present (like efficacy or circularity), it is simply not grace. Barclay pushes us to think we are in need of a theology of graces.