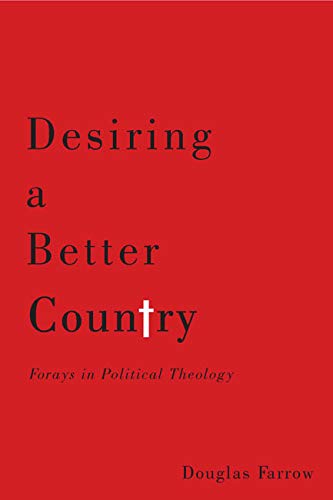 Political theology may seem either impolite or imprudent—an uncomfortable wedding of politics and religion, or the amateurish forays of theologians posing as pundits. And yet, as Douglas Farrow remarks, "I do not see how any theologian can neglect political theology altogether." He testifies to his own experience of being propelled from systematic to political theology: "In my own case, work on the ascension made it unavoidable, for that doctrine is incomprehensible without its political dimension." Indeed, Farrow's landmark work, Ascension Theology, astutely reminded us of the cosmic kingship of the ascended King, pressing systematic theology to realize the political implications of orthodoxy.[1]

Political theology is not, then, some misguided supplementary pursuit merely for young leftish idealists or soothsayers on the right who want to comfort princes. A political theology is entailed by the gospel. Farrow succinctly captures this on the first page of Desiring a Better Country:

Christianity is a very political religion. It aims at a polis, and not just any polis, but one whose builder and maker is God. In a certain sense, then, it is a politically subversive religion, for it has turned its back on the city that is built by men and populated with gods, in favour of that city that is built by God and populated with men. And it encourages others to do likewise. Yet its subversion is not of the kind that the rulers of men, or their court philosophers, commonly suppose. While it has not hesitated to offer stinging critiques of man-made cities, cultures, and empires, pointing out their more demonic dimensions, it has also taken a deep interest in those same cities and cultures.

Like Oliver O'Donovan, Farrow argues that the history of our Western democracies bears this out: as much as we try to tell ourselves that we live in "the common era" rather than "the Year of our Lord," the numbers tell the story of a dent made in history by the incarnation, death, resurrection, ...