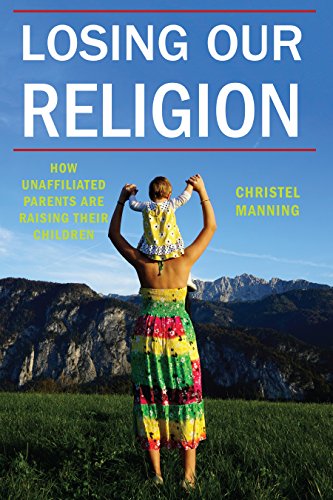 Happy Being a None

The sanctity of personal worldview choice.

The problem with using the term "None" to describe people who say they do not have a religious affiliation is that it "defines people in terms of what they do not have, implying that they are somehow lacking, when in fact what they have just may not fit the researcher's category." So writes Christel Mannning in her mildly interesting but cloyingly defensive and often biased new book, Losing Our Religion: How Unaffiliated Parents Are Raising Their Children.

Manning, a professor of religious studies at Sacred Heart University in Connecticut, became interested in who the Nones are and what they do with their kids because of her own experience. Ten years ago, her then-three-year-old daughter asked about Santa Claus. While Manning and her husband were not religious, they had been celebrating some cultural version of Christmas, and when her daughter started to probe more, Manning was unprepared. "Over the years, I experimented with Buddhist meditation and feminist goddess rituals and eventually acquired a doctorate in religious studies." But it was her daughter's questions that "led me to ask myself, what do I believe in and how do I transmit those beliefs to my child?"

Perhaps Manning is right when she asserts, based on her interviews, that having a child prompts many parents to clarify their own beliefs, but one might expect that somewhere along the line of getting a doctorate the question would have struck her. Still, however she arrived at the question, here we are. And the first thing to do is figure out what exactly it means to be a None. Manning is correct that it is too broad a category for many investigations. So she divides the Nones into four groups: the unchurched believers, the spiritual seekers, the philosophical secularists, and the indifferents. These categories give readers a sense of just how many different things people can mean when they say they are Nones. An evangelical who hasn't found a church that seems like a good fit, someone who is investigating ...