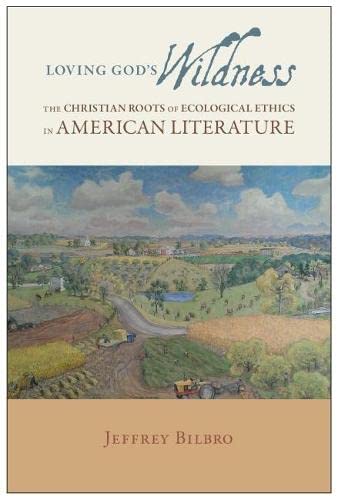 From Nature to Creation

Editor's Note: This is a guest column by Jeffrey Bilbro, assistant professor of English at Spring Arbor University. His book Loving God's Wildness: The Christian Roots of Ecological Ethics in American Literature was published in 2015 by University of Alabama Press.

Over the last several centuries, developments in philosophy, science, and technology have gradually conditioned us to perceive the world as "nature" rather than "creation." This shift in how we name where we are, Norman Wirzba argues in From Nature to Creation, has far-reaching consequences for how we inhabit the world—and he proposes a reversal. Drawing on the work of Emmanuel Levinas and Dietrich Bonhoeffer, Wirzba claims that calling the world "nature" renders the modern self "'asleep'" or even "'dead'" "because it is not alive and responsive to another in its singularity and transcendence." As an alternative, Wirzba urges his readers to dwell within a creation that continually summons its inhabitants to attention, gratitude, and care.

One of Wendell Berry's Sabbath poems demonstrates how such a transformation can occur and what its effects might be. Berry wrote this ekphrastic poem in response to The Resurrection, a fresco by Piero della Francesca; in it he describes Christ standing "awake" above the sleeping soldiers. The poet struggles to find words adequate to Christ's iconic gaze, a gaze felt to be "powerful beyond life / and death, seeing beyond sight or light." Seen by Christ's piercing eyes, Berry realizes he has been radically changed:

And we who were sleeping, seeking the dead
among the dead, dare to be awake. We who see
see we are forever seen, by sight have been
forever changed. The morning at last
has come. The trees, once bare, are green.

Found in the gaze of the resurrected Creator, we are awakened to a green, living world. Piero represents this transformation by painting the trees to the left of Christ as barren and dead, while those on the right side burst forth in spring's new green. Whereas the modern subject sees only nature's bare branches, those attentive to the Creator's gaze are awakened to see creation's abundant life.

Wirzba's book acts as a theological wake-up call, a summons for Christians to see themselves as inhabitants of God's ongoing creation. In turn, such a renewed perception would change the way we relate to the other members of creation. Wirzba's emphasis on the way we name our world may seem unimportant, "academic" in the pejorative sense, but as he points out, how we name an object determines in large part how we relate to it. Whether we name a particular plant a "flower," a "weed," or a "vegetable" determines whether we will admire it, eradicate it, or eat it: "This brief ontological exercise demonstrates that the naming and the narrating of our world is no trivial thing. To say that our world is 'creation' rather than a 'corpse,' a 'material mechanism,' or a 'natural resource' means that we need to see it and our involvement with it in a particular, God-honoring sort of way." Unfortunately, as Wirzba points out, the strains of gnostic dualism within Western Christianity have too often prevented Christians from narrating the world as creation.

When Christians have an inadequate theology of creation, they lack the means to resist modernity's view of nature as a Heideggerian "standing-reserve" of consumable resources. Drawing on the work of philosopher Jean-Luc Marion, Wirzba argues that narrating nature in this way constitutes a species of idolatry. For Marion, humans make idols to accommodate and fulfill their desires. In other words, an idolatrous gaze at "something includes a mirror reflection of the gazer's capacities, dispositions, and expectations." Making nature into an idol renders us asleep to the needs and desires of others; instead of being responsible to other creatures, we demand that they gratify our appetites.

Our task, then, is to learn to see the world as an icon that reveals its Creator rather than as an idol that mirrors back our own appetites. Wirzba argues that we can cultivate such iconic perception by practicing ascetic or monastic habits that resist our selfish desires. By moving our desires from the center of our vision, we can begin to see others as they are. Such "Sabbath seeing" rests in mutual attention rather than striving to co-opt the object of our gaze into something we can put to use.

To foster iconic perception, Wirzba not only re-names nature as creation, he also re-names modern human subjects as dependent creatures. He reads Genesis 1 and 2 from this perspective, demonstrating that God does not make Adam and Eve as autonomous subjects but rather sets them in a garden where they are dependent on and responsible to their fellow creatures. We enact our inescapable dependence on others every time we eat, so Wirzba challenges us to begin living into this creaturely identity by the way we name and relate to our food: "There is a world of difference between naming food a commodity or fuel and naming it God's love made delectable. If food is the latter, then it is the perpetual invitation into a life of hospitality and sharing and fellowship."

This convivial, creaturely life depends upon the practice of gratitude. Yet our modern market economy, particularly as it exists on the internet, conditions us to believe that everything is accessible to us and that we are entitled to whatever we can afford. As Wirzba notes, "Never before has the world been so easily available to our every whim and desire … . [T]hese new forms of economic life make possible, and in some cases clearly encourage, habits of inattention, ignorance, and ingratitude that are destructive of communities and creation." If in fact we are always already dependent on others, the "question is not if but how we are going to go about receiving and giving"; rather than seeking the freedom to subjectively create our own idols, "gratitude entails the enactment of a new kind of freedom, not the freedom that seeks release from our entanglements with others, but instead a freedom that is available to and for others." This is the kind of freedom that characterizes and sustains creaturely life.

Wirzba issues a stirring call to re-name who we are (creatures rather than subjects), where we are (creation rather than nature), and how we see (iconically rather than idolatrously). His focus on the importance of naming threatens, at times, to leave humans as the name-giving subjects; it's up to us whether we want to name the world creation or nature. We, as subjects, must choose to see the world iconically. If, however, we are indeed creatures, then creation describes an ontological reality rather than just a phenomenological experience of those who rightly name it.

The counterpoint to this insistence on our need to name the world rightly is Wirzba's emphasis on practicing hospitality, which is a posture of radical openness to an ontological other. According to Wirzba, God models the virtue of hospitality in the act of creation, where God makes room for creatures to "freely become themselves." By following the divine example and likewise making room for other creatures, we can participate in what Wirzba describes as an ongoing "performance in hospitality." Such hospitality enacts a properly other-oriented love, which Wirzba defines as "the hospitable disposition that creates the space and the freedom for another to be."

While such hospitality and the iconic vision it enables are vital to the health of creation, Wirzba acknowledges that they remain very difficult, particularly in a culture and an economy that cultivate consumerist, self-centered habits. Throughout his argument, he reflects on several concrete practices—gardening, Sabbath-keeping, and giving thanks—that counter our idolatrous tendencies to remake others in the image of our own desires. Such practices, however, cannot guarantee iconic perception; although we can choose and make our idols, icons can only be given. As Marion argues, we see idols, but icons see us. And when we are caught in the gaze of the resurrected Creator, we are awakened to an abundant, beautiful creation. As Berry testifies, "The trees, once bare, are green."—Jeffrey Bilbro