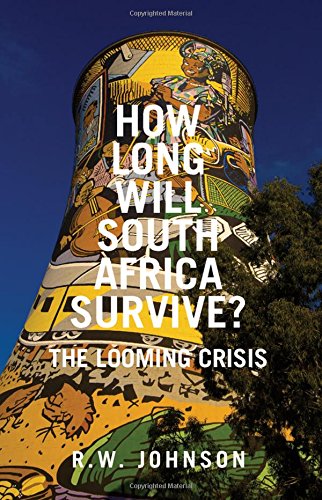 Sad as it is, I can't dispute R. W. Johnson's latest account of South Africa. He is South African himself and a meticulous career expert on destabilizing forces in the country. This is actually his second book with this title, the first one having appeared in 1977. If you want—and maybe you don't—the last word in bad news from the southernmost, most developed part of the troubled continent, you couldn't find a more fearless source than this Marxist long ago turned free-market enthusiast.

The post-apartheid regime recently proposed (and this is just one example of its head-spinning recklessness—Johnson tends to devote just a sentence or two to each example, there are so many) that 50 percent of the nation's remaining commercial farms be appropriated, and that their former owners be forced to remain on them to train newcomers in farm management. But land redistribution has already broken the back of the once-mighty farming sector and raised the threat of national food insecurity. An attempt to enslave white farmers (whose physically embattled cause Genocide Watch took up a number of years ago) as facilitators of their own dispossession would trump neighboring Zimbabwe's folly. Zimbabwe's leaders at least let farmers run for it.

I must stress that my tone isn't Johnson's; he's chiefly a numbers man, though he clearly reads everything, gets around, and talks to every player who's willing. Unfortunately, his macro-economics and assessment of high-level political strategies on the one hand, and my daily and personal observations (supplemented by contacts maintained with South African friends and colleagues, now that I live in the US again), tell the same frightening story.

I moved to the country in 1994, shortly before the first multi-racial elections, and I can attest that development was excellent by African standards. I marveled at the sheer number of ATMs. (My sister, a biologist, had warned me about Cape buffalo, as if they roamed the streets.) Whites were of course far better off, but their districts were integrating fast with the rising black middle class—legal segregation had been eliminated long before political inclusion came—and everyone but a few we classed as nut-cases cheerfully projected that high standards would push out to the chaotic "townships" and the rural wastelands. Then there would be peace and prosperity for all.

Nobody I knew imagined the relentless electrical grid failures Johnson cites. Still, within a few years problems were common. Zzzzt. Out went the lights in a mall while I was getting a haircut, but the staff in the windowless salon were prepared. A second beautician and two tea ladies approached with lighted candles and held these around my head while the original beautician continued snipping; it was fun, actually, like a piratical slumber-party game, but the result looked bad in daylight. A lot in South Africa came to look startlingly bad, like the gibberish of the "sign-language interpreter" at Nelson Mandela's memorial ceremonies.

Obviously, breakdown of this kind can't be blamed on white racism. Nor, as Johnson argues, does Western bullying and gouging figure in South Africa's present fate. The country is geographically isolated, politically all but autonomous, and unbelievably resource-rich (having the densest concentration of valuable minerals in the world), with a posh inheritance of infrastructure and expertise and a great accumulation of international goodwill. The new majority government is blowing it all.

Johnson looks toward the probable crisis, the nationwide municipal elections of 2016. Under Jacob Zuma's presidency, his African National Congress's abuses have gone from ordinary for the developing world to X-rated. "Cadre deployment," or the attempt to control all sectors of civil society with dedicated ANC operatives, has become open political violence and intimidation, with legal consequences headed off or disregarded, and often openly sneered at.

Chapter 2 opens with five men, armed with AK-47s, piling out of a vehicle in broad daylight in a busy city and heading toward Durban's High Court, with a view to stopping some inconvenient proceedings. Camera footage later identified the driver as a policeman, and Johnson lays out in lengthy detail the government's connections to such a brazen eruption of organized crime; these connections are in fact common knowledge in what remains of the independent local press.

On the policy side of the governance mess, largess of public-sector jobs has imperiled the fiscus, captured a destructively high proportion of public spending in salaries, helped inspire a private-sector "investment strike," and pitted the large entitled corps of the overpaid employed against giant numbers of the unemployed. (Alas, many of the new functionaries are incompetent or no-shows.) Most pitiful to me—and perhaps most dire for the country's long-term future—is the hollowing-out of the public school system, now ranked at the bottom worldwide.