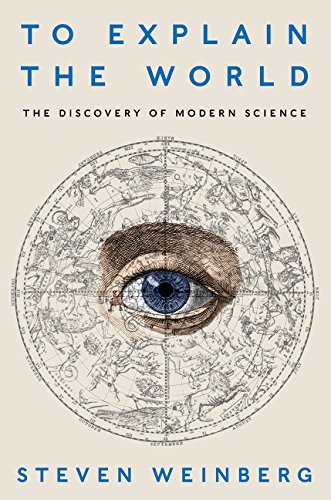 A World Without Shadows

"Stand still," John Donne wrote, way back in 1633, "and I will read to thee / A lecture." The next lines of that poem, "A Lecture upon the Shadow," appear as the epigraph to Steven Weinberg's recent (and quite lecture-ish) history of science, To Explain the World: "Now, the sun is just above our head … And to brave clearness all things are reduced." Clarity through reduction is Weinberg's goal. By the time he gets to his conclusion, he has reduced the lenses through which we view nature to just one layer: the "truly fundamental principles of physics," which can be used to explain every phenomenon we know, from chemical reactions to biological realities, from gravity to human consciousness. Biologists and chemists are merely sub-operators, governed by physical laws. Philosophers, historians, and ethicists, begone. Poets, artists, and theologians, take a hike.

Steven Weinberg, now in his eighties and a Nobel Laureate in physics, can certainly claim the prerogative to tell his tale in a way that puts his own professional competencies front and center (not to mention back, left, and right). And To Explain the World provides a useful timeline of important developments in physics, along with a valuable set of appendices that clearly explain the math behind the physics.

But as a history, it fails.

The book unfolds along fairly standard, if oddly proportioned, lines. As most historians of science do, Weinberg begins with the ancient Greeks, spending five chapters on Greek physics and three on Greek astronomy. Medieval science (Arabic natural philosophy and Ptolemaic astronomy) gets two chapters, and the scientific revolution (Copernicus through Isaac Newton) four.

And then the book ends, suddenly, with an epilogue that takes us from Newton to the present in a mere twelve pages. The rapid exit reflects one of Weinberg's central assertions: Newton's physics explained the universe with perfect adequacy, and although Max Planck, Albert Einstein, Erwin Schrödinger, and their successors complicated and qualified the Newtonian scheme with relativity and quantum theory, the current "Standard Model" of the universe (a quantum field theory that gives "a remarkably unified view of all types of matter and force … in a set of equations that can fit on a single sheet of paper") does not negate Newton's conclusions. "The difference between Einstein's and Newton's theories," Weinberg writes, "is far less than the difference between Newton's theories and anything that had gone before." For Weinberg, Isaac Newton's synthesis is the emergence of "modern science." Everything after is frosting.

What is this modern science? Pieces of its definition are scattered throughout the book, beginning with the epigraph. Modern science is the sun overhead that drives shadows away, lighting the natural landscape with complete clarity: an impersonal, objective "technique … that allows us to learn reliable things about the world." It has no moral implications, "no element of purpose," no intrinsic connection with human concerns. It is, in fact, an independent thing: not a viewpoint, or a method devised by human minds and hands, but rather an objective reality "waiting for people to discover it."

Which is why, Weinberg points out, he subtitled the book "The Discovery of Modern Science" rather than "The Invention of Modern Science." Modern science wasn't invented by human beings. Modern science is something like a vast underground geological formation that has always existed, and now has been slowly unveiled by centuries of erosion. Modern science exists because of the structure of the universe; it is in all things, and through it all holds together.

This explains a number of the book's stylistic peculiarities—not least, Weinberg's persistent use of the passive and impersonal. "Speculations about nature took a turn towards a style that was less poetic and more argumentative." (Why?) "Creative scientific work began at last in Europe in the fourteenth century." (Why?) "The center of scientific work shifted eastward." (How?) "A revolution in astronomy began." (Who?) "In modern times a place has been made for pure science." (Where?) And, most egregiously, "By the late eighteenth century, physical science had become thoroughly divorced from religion." (Um …)

Dismissing human agency and the need to show causation, Weinberg is left with a huge unanswered question.

Full disclosure: I am by training a humanist, although I have made my own forays into the history of science. So by the time I hit that last statement, my tongue was practically hanging out for causation, or at least for some historical actor to stride onto the stage and claim some part of science as his own. But individual personalities have no place in Weinberg's scheme. "I cannot tell," Weinberg admits, "why it was Isaac Newton in late-seventeenth-century England who discovered the classical laws of motion and gravitation." Then he moves on. It doesn't matter: Modern science, it seems, would have emerged without Newton, in the same way that someone would have stumbled across North America even if Christopher Columbus had never been born.

So Weinberg gives scant attention to personal details, refusing to enter into the minds and times of his scientists, happily passing judgment on their work using the criteria of modern science. Plato is "silly," Aristarchus "never tried to judge the uncertainty" of his conclusions, Ptolemy "was not consistent." Descartes he dismisses wholesale because the great Frenchman was wrong about the pineal gland and the transmission of light: "His philosophy … is much admired," Weinberg muses, "especially in France and among specialists in philosophy. I find this puzzling …[I]t is remarkable how wrong Descartes was about so many aspects of nature" (thus tarring philosophers and the entire French nation with the same brush).

The detail-free narrative strategy produces a whole lot of rather dull pages that read like disconnected Facebook posts: Who discovered what, and when, with no sense of why the discovery was made, or sought, or what difference it made. And Weinberg's persistent presentism leads him into some startlingly myopic statements—such as his remark that Francis Bacon's contribution to modern science is negligible, since Bacon ("neither a scientist nor a mathematician") never really influenced anything important: "It is not clear to me," Weinberg sniffs, "that anyone's scientific work was actually changed for the better by Bacon's writing." (As it happens, this completely ignores the entire Royal Society of London, founded to explore Baconian principles and subsequently a major factor in the advancement of "modern science.")

So as a history, To Explain the World flounders. But even as a paean to modern science, it winds itself into a fatal contradiction. Dismissing human agency and the need to show causation, Weinberg is left with a huge unanswered question. If modern science exists independently of us, if it yields conclusions that are repellent to many ("Even if our predecessors could have imagined science as it is today, they might not have liked it very much"), if it is counterintuitive ("Nothing is obvious about the practice of modern science"), why on earth does anyone do it? What, in Weinberg's phrase, "drove us" to modern science? Why didn't humanity just keep on sacrificing to Apollo instead? (At least there would have been roast meat involved.)

Weinberg comes up with a Darwinian explanation: When we figure out an explanation that fits the world, clarifies something, clears up a mystery, we experience "intense satisfaction, especially when the new understanding is quantitative, and observation bears it out in detail …. We get intense pleasure when something has been successfully explained." We do science, that is, because it makes us feel good. In fact, it makes us feel better than any other form of knowledge.

This is problematic in more ways than one. First, it is most certainly a qualitative, not quantitative, judgment on Weinberg's part. ("Imagine how Ptolemy must have felt when he … found a theory of planetary motions …. We can get a sense of his joy.") Joy is about the least quantitative measure in the universe, and Weinberg has no data to back up his assumption that joy is more intense when quantitative measures are involved. Yet he makes this claim more than once. "After centuries," he writes in his conclusion, "we learn what kinds of understanding are possible, and how to find them. We learn not to worry about purpose, because such worries never lead to the sort of delight we seek. We learn to abandon the search for certainty." That particular we certainly doesn't encompass C. S. Lewis, or the untold numbers of women and men who, from the dawn of time, have found such joy in religious explanations.

Second, it leaves Weinberg with an enormous teleological problem—even in Darwinian terms. Eating gives us pleasure because we have to eat to stay alive. Sex gives us pleasure because we have to reproduce to survive. But it's very hard to make the case that the practice of modern science—which by Weinberg's own definition has no measurable effect on our lives and does not "lead directly to anything useful"—serves any Darwinian purpose in our lives. So why does it make us feel good?

Weinberg's answer: The drive towards modern science is built into nature. It is part of what is. "The world," he concludes, "acts on us like a teaching machine, reinforcing our good ideas with moments of satisfaction."

In the end, this particular history of science is like one of those equations we all had to learn to solve in junior high: the kind that require you to keep simplifying things in parentheses and cancelling out elements on either side of the equals sign, until a complicated mass of numerals has been pared down to two clear expressions. And what Steven Weinberg ends up with is the simplest equation of all: on one side, seekers of knowledge; and, on the other, something that wants to be known.

Susan Wise Bauer is the author of The Story of Western Science: From the Writings of Aristotle to the Big Bang Theory (Norton).