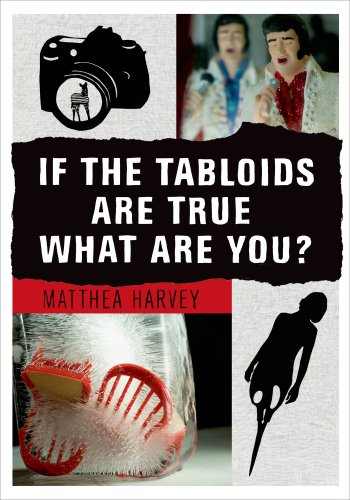 An exercise in the dominant period style.

Matthea Harvey is no plainspoken swooner over dusk-stippled fawns. She's one of the many water sprites who dance on the softer edges of poetic experimentation, flitting among disjointed phrases and zany images like a Looney Tunes highlight reel. This style has been hip for so long that it feels less trendy than ideological, the poetic equivalent of genetic determinism, predicated on a set of dubious assumptions that have become part of the background.

Harvey's endeavors in this addled mode are much acclaimed—2007's Modern Life received a National Book Critics Circle Award nomination amid rave reviews. If the Tabloids Are True What Are You? is her fourth book, and her most ambitious. It's a collection not only of poems but of photographs, ice-cube sculptures, embroideries, and Kara Walker silhouettes. Harvey's usual procedure is to imagine some quirky conceit—what if I had a zebra for a son, what if Rhyme and Fragment and Free Verse were schoolchildren, what if new constellations appeared—and then spin out its associational corollaries.

Harvey can be a riotously inventive curator of menageries. "My Owl Other" ends with a characteristic unearthing of loss within a linguistic turn:

Yes, there's an owl in bowl, and no,
there's no bowl in owl, unless we count
the hollow in a willow left behind
when one flies away.

This is smart and strangely sad, its sonics suited to its sense, as though the relationship of signifier and signified were anything but arbitrary. Harvey's absurd premises require such precise telemetry to stay in the air. "Quick Make a Moat" describes a graceful arc from "Before the rain, only baseballs / and baby birds fell from the sky" to "the time before rain, when we never / woke to find the car in the driveway / suddenly effortlessly sparkling clean." "One Way" dreams the genealogy of directionality:

Where the first one came from, we'll ...