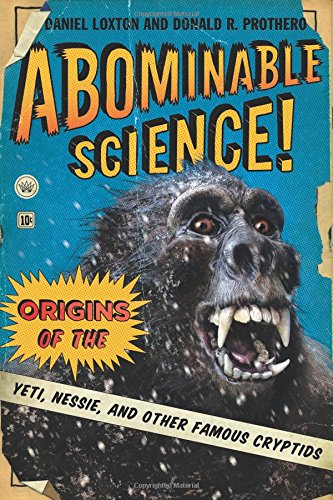 Confession time: I've watched my fair share of shows such as Finding Bigfoot and Bigfoot: The New Evidence. (This dates me, but I was in my small town's movie theater for opening night of The Legend of Boggy Creek. Two days later I returned to see it again.) These programs typically have a similar trajectory. You're teased with tantalizing "new evidence," which gets introduced within the first third of the program. The tantalizing evidence often is some kind of hair or feces that the finder swears is unlike anything they've ever seen (and they're supposedly familiar with black bear, brown bear, wolf, deer and other animal hair and feces, so it couldn't be any of those). By the end of the program, analysis reveals that the "new evidence" is from a bear, bison, human, or domestic animal. But the intrepid believers in Bigfoot, though disappointed, go on undaunted because, well, the truth is out there!

Bigfoot, among other mysterious beasts, is the subject of Abominable Science! Origins of the Yeti, Nessie, and Other Famous Cryptids. This is an immaculately produced book rivaling the production values of the finest coffee table volumes. (Try it at home—it's a guaranteed conversation starter for guests.) Daniel Loxton and Donald R. Prothero (yes, the Prothero of creationism and ID debates) delve into some of the most well-known cryptids (mystery creatures whose existence hasn't been demonstrated): Bigfoot, the Yeti, the Loch Ness Monster, sea serpents, and Mokele Mbembe (the Congo dinosaur). Each cryptid gets its own heavily documented chapter (there are over 1,100 footnotes altogether); these accounts are bracketed by an introductory chapter on cryptozoology (the study of cryptids) and a concluding chapter on why people believe in monsters.

Abominable Science! is entertaining, informative, and readable. The Bigfoot legends, we learn, originated with Native Americans, although their tales bore little resemblance ...