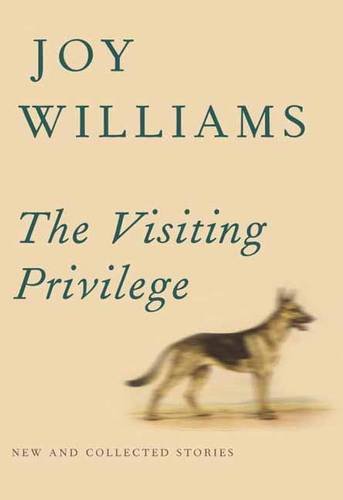 The stories of Joy Williams.

Joy Williams, author of four novels and as many story collections, was introduced at a Tin House writers' conference thusly: "If Joy pulled up in a car with two dead bodies in the back seat, and said, 'I have to tell you about the bagels I just bought,' it would be the better part of wisdom to listen to her talk about the bagels." How better introduce a storyteller whose fiction so routinely outwits all expectation. Bagels or dead bodies, here is a writer who directs attention where she will, casts the spotlight, tilt, askew, saying, Look at this, and I will show you something. Then she does, with charm and grace, and a wild gimmickry and passion that ensure we cannot look away. Her new book, The Visiting Privilege: New and Collected Stories, is a treasury of stories like no other.

It is surprising to find the frank consistencies in story form and subject in the first 33 pieces in this new collection—this in contrast to the 13 newer stories that follow. Often a first sentence introduces three or four characters, by first name only, and the domestic narrative unfolds inside a late night kitchen, a car, an ordinary circumstance, almost always in America, and frequently in families where life has gotten more than a little out of hand. And, it must be said, few of Williams' characters are strangers to the demon drink.

So. Simple story set-ups. Williams knows that the heart of the matter is not in the telling of tall tales in foreign climes with spies and revolutions and electronics, stories littered with product names and catalogues of culture's trappings. She is here to tell us what it is to be person, what a thing a lifetime is. She knows and shows us it is that which cometh out of a man that defiles the man, just as Matthew's and Mark's gospels say, and she allows no element of any story to interfere then with the work that she is come to do. Simple story set-ups, over and again. Then, she blows the reader out of the water.

Despite these common story elements, there are no cookie-cutter characters here, for the simple reason that we are not all the same. A woman is asked to snap a photo of a couple of strangers on the street, but only pretends to take their picture, feeling this to be her "defensible right." And such actions, though appearing random, do have reasons, causes, claims to make. Things are not as they appear. Nor are they otherwise. A house on the market might be sold, or burned to the ground by the owner. Foregone conclusions duke it out with wild caprice and sudden, often cannily founded inspiration. And time will always play a part. A woman understands in her heart "that the past was but the present in that future to which it belonged." Williams often wears dark glasses at public readings, and, one imagines, perhaps at her private writings too, for she tells of a world tinted, darkened certainly, but all the sharper and more focused for the concentrated light.

The prospect of attempting a synopsis of any of these stories seems daunting from the start. Summarizing the "story" of a story seems somehow to miss the point, much as describing a miracle or magic show will always fall so short. You had to be there. With this fiction, you have to read it. And what an adventure that will be. Here is humor and life and tragedy told slant. Often so slant, the reader wants to hold on to something steady, but Williams will have none of that, instead insisting that we must let go if we are to be instructed, made to see, or ever changed.

With almost every story here a graceful tightrope walk, it is all the more disappointing to read the few in which Williams attempts that aerial feat while juggling hunting knives, umbrellas, fireworks, and the odd raccoon. In these (very few) duds, every character speaks with prescient, quirky irony—their voices beguiling, but indistinguishable—and bizarrely fashioned circumstance and wild coincidence accumulate until the reader wearies. Enough is as good as a feast, a fact Williams more reliably remembers.

The final 13 stories in the collection, identified as New, show a marked difference in both length and range of scope and subject from the earlier work. These stories feel more fully realized in some sense; clearly the work of the same creator, but with plot complication, story intricacy, perhaps some leisure in exploration and design. It is a brave writer who moves unafraid from her perfected art to a brand new way of coming at the enterprise. Only one of these newer stories, "Brass," disappoints—when the main character is revealed to be none other than Jared Loughner, Gabby Giffords' shooter.