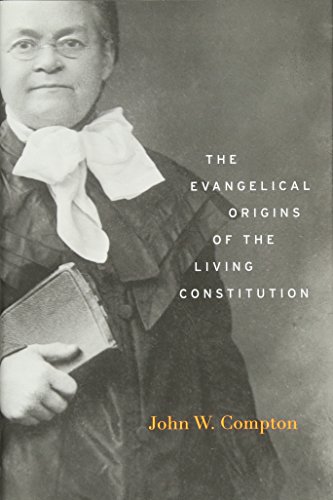 The title of John W. Compton's intriguing history of morals legislation and American constitutional history, The Evangelical Origins of the Living Constitution, should pique the interest of anyone who knows the code words of the our recent political debates. A "living constitution" is not tethered to the Founding Fathers' intent or the literal text of the Constitution; it evolves through time, adjusting to changing circumstances. When Republican presidential aspirants vow to appoint justices who respect the constitution, they know that most evangelicals, especially those over thirty, will share their disdain for the living constitution. Yet here is a Chapman University political scientist insisting that evangelicals didn't just support the living constitution in earlier generations. They helped to create it!

In Compton's telling, mustard seeds were sown in the early and mid-19th-century battles over lotteries and prohibition. After widespread acceptance in the founding era, lotteries came under increasing attack when the Second Great Awakening began to reshape American culture. Church membership soared during this period, and many newly devout Americans no longer accepted lotteries as a convenient and pleasurable way to raise money for everything from church buildings to bridges. Not surprisingly, those who held lottery licenses were not anxious to relinquish them. When states enacted lottery bans, license holders insisted that the bans violated the Contracts Clause of the Constitution, which forbids the states from impairing previously granted contractual rights. Contrary to the conventional wisdom, which assumes that 19th-century judges consistently embraced morals legislation, the license holders frequently prevailed.

The temperance movement faced similar obstacles. When states passed anti-liquor laws, liquor businesses insisted that their right to make or sell liquor was constitutionally protected property and couldn't be taken away, any more than the state could take away a person's house or rifle without paying for it. Lawmakers concocted workarounds, such as restricting liquor without imposing an outright ban. But the moralist's path was never easy.

For evangelical advocates of moral reform, the US Constitution was an endless source of frustration. Even after the temperance movement had enjoyed some success at the state level, one of its leaders, New Hampshire Senator Henry Blair, denounced the Constitution as "the great legal fortress of intemperance" and "the great almighty obstacle in the way of … reform."

Compton attributes the eventual shift in judicial attitudes to a political realignment that took place in the 1850s. Prior to this period, the Whigs—the conservative party and predecessor to the Republican Party—and Democrats both stepped gingerly around the temperance issue. As the Republican Party emerged from a "loose coalition of anti-slavery, temperance, and nativist elements," it strongly endorsed prohibition, since most of its supporters favored both abolition and temperance. This prompted Democrats to sharpen their opposition. As the parties' stances hardened, Republican judges began to dissent from decisions that invalidated morals legislation, and upheld morals legislation when they were in the majority.

The cases upholding morals legislation often analogized lotteries and liquor to evils like prostitution. The Constitution protects only legitimate property rights, the reasoning went. "The privilege to do wrong cannot be purchased and fastened, like the shirt of Nessus, upon the community," the Mississippi Supreme Court wrote in 1873. "Such a doctrine would deprive the state of the power to right herself by repealing any reckless legislation whose certain tendency is to corrupt the fountain of public morals."

By the end of the 19th century, the Supreme Court had entered the picture, as it always does on moral and social issues. The Gilded Age justices were notorious for strictly enforcing contract and property rights, striking down maximum hours and child work laws because they supposedly impeded employees' right to freely negotiate their terms of employment. But the Court also was quite sympathetic to morals legislation. Having come to a fork in the road, the Court took it, continuing to strike down state laws that interfered with contractual rights, but also carving out an exception for anti-lottery laws. The Court adopted creative interpretations of the Commerce Clause, which gives Congress the power to regulate interstate commerce. In Champion v. Ames, a 1903 case upholding a federal ban on lottery ticket sales, the Court held that immoral items such as lottery tickets automatically came under the umbrella of commerce. The court subsequently struck down a child labor law, based on the equally puzzling conclusion that the Commerce Clause does not apply to matters that are inherently "harmless."

This awkward edifice came tumbling down in the New Deal. According to the traditional story, New Deal progressives and the Depression forced the Supreme Court to abandon its strict interpretation of the constitutional constraints on state and federal lawmaking. A famous "switch in time" took place in 1937, when Justice Owen Roberts, the Justice Kennedy of his time, suddenly started voting to uphold the New Deal laws that the Court had previously struck down as unconstitutional. But revisionist histories of the New Deal have recently complicated this conventional wisdom. Barry Cushman has argued, for instance, that hints of the constitutional revolution predated the 1937 "switch in time," and can actually be found in earlier cases that laid the groundwork for the living Constitution of the New Deal.

The Evangelical Origins of the Living Constitution is a noteworthy addition to the revisionist narrative. Compton argues that the Supreme Court's earlier morals decisions were a key antecedent to the Court's adoption of a more flexible perspective on the Constitution in the New Deal. In his dissenting opinion in Tyson & Brother-United Theatre Offices, Inc. v. Banton (1927), for instance, Oliver Wendell Holmes, Jr., had emphasized the shift in public opinion that led to the upholding of lottery and liquor restrictions as evidence that constitutional interpretation needs to adjust to changed circumstances.

Compton's book stitches together two quite different stories, one about courts' initial resistance and subsequent embrace of morals legislation, the other about the revolution in constitutional interpretation in the 1930s. The stitching is not always seamless. Evangelicalism largely drops out of the story after an interesting initial chapter surveying the recent secondary literature on the Second Great Awakening. As a result, Compton achieves the remarkable feat of writing about evangelicals and prohibition without ever once mentioning William Jennings Bryan, the three-time Democratic presidential nominee who was the best known evangelical in American politics and the face of the prohibition movement during the first several decades of the 20th century.

Compton's real subject is the doctrinal evolution that took place in judicial decisions once anti-lottery and temperance sentiment began to displace Americans' earlier acceptance of lotteries and liquor. It is here that The Evangelical Origins makes a genuine contribution. Compton rightly points out that many of the classic histories of American law treat the 19th-century courts as consistently moralistic, without appreciating the dramatic shift that took place in judicial doctrine and the awkward tension this created with earlier cases. He has exposed a remarkable sequence of developments in American constitutional history. Although his treatment of the New Deal revolution is less nuanced, Compton rightly draws attention to the role that the morals cases played in the emergence of the living Constitution.

The Evangelical Origins of the Living Constitution doesn't fulfill all of the promise of its title. But it is a fascinating start. Anyone who needs more evidence that the law of unintended consequences works overtime in American legal history can simply draw a line from Compton's lottery and prohibition cases to a more recent decision like Roe v. Wade.

David Skeel is a law professor at the University of Pennsylvania. He is the author of The New Financial Deal: Understanding the Dodd-Frank Act and Its (Unintended) Consequences (Wiley-Blackwell). His book True Paradox: How Christianity Makes Sense of Our Complex World was published last year by InterVarsity Press.