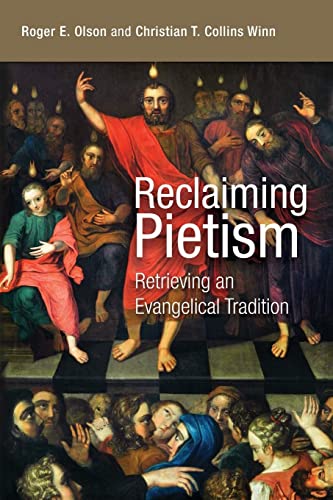 The case for "reclaiming" Pietism.
September/October 2015

At last fall's biennial meeting of the Conference on Faith and History, one of the most popular sessions featured a 25th-anniversary discussion of David Bebbington's Evangelicalism in Modern Britain, with Bebbington himself responding to papers from Darren Dochuk, Mark Noll, and Molly Worthen. I didn't time it in the moment, but looking back at my tweets from the session, it seems that it took 45 minutes for anyone (Worthen, bless her) to so much as mention Pietism.

45 minutes. In a session on the origins and definition of evangelicalism. (And even that comment came and went without much follow-up.)

All of which came back to mind as I read a book meant to remind evangelicals and those who study them what Donald Dayton, W. R. Ward, and others have already demonstrated: that evangelicalism grew out of German Pietism as much as Puritanism, Wesleyanism, or any of its other sources. And that a Pietist ethos continued to awaken, revive, and renew Christianity well beyond Germany and well after the 1700s.

Still more urgently, however, Roger Olson and Christian Collins Winn's retrieval of the Pietist tradition is needed because it "offers contemporary evangelical Christianity a resource for its own renewal" at a precarious moment in that movement's history.

But let me recommend the book before I have it solve all of evangelicalism's problems. Collins Winn and Olson have provided the best introduction to Pietism available in a single volume. (Full disclosure: both contributed chapters to a book on Pietism and higher education that I edited recently for InterVarsity Press.) Whatever the inevitable limitations of any attempt to survey so big a topic in so short a book, Reclaiming Pietism is an accessible, provocative work that will help evangelicals and other readers to rediscover a religious ethos that did not begin with Philipp Jakob Spener or end with August Hermann Francke.

While the chapters on those prototypical figures (and their often mystical precursors) are well-done, they largely recite a story that's been told many times since Ernest Stoeffler and Dale Brown first energized English-language Pietism studies in the 1960s and 1970s. More valuable are the chapters that go beyond Spener and Francke, starting with the one that sketches Radical, Moravian, and early Württemberg Pietism. (Nikolaus von Zinzendorf is central to this account of Pietism, almost as prominent as Spener and Francke in an overview of Pietist "hallmarks" and "the only one to translate his Pietist vision of the church into a sustainable model.") The survey of Pietism in America leans heavily on a 1976 collection commissioned by Stoeffler but also weaves in research on Brethren and American Lutheran expressions of the ethos. It's followed by a lively exploration of Pietist wrestling with modernity that introduces casual students to Johann Christoph Blumhardt, his son Christoph, and the little-known August Tholuck and Johann Hinrich Wichern.

What's most remarkable is that Olson and Collins Winn can range so widely and yet convincingly maintain that they're still talking about Pietism. Acknowledging that there is ample disagreement about "who counts as a Pietist," they suggest the existence of a "mere Pietism" that is better understood as an ethos than a movement, one "amenable to different flavors" as it is expressed in different contexts by different individuals.

It's an approach that bends but never breaks. Contested figures usefully complicate the story while still reiterating the core set of distinctives, "what [Pietism] shares in common not widely emphasized in the same way elsewhere." So without getting bogged down asking whether Friedrich Schleiermacher counts as a Pietist of a higher or any other order, Collins Winn and Olson let him underscore what's distinctive about Pietism: the emphases on piety, feeling, and community that Schleiermacher retained from his Moravian upbringing, and the fact that his Christ ("shrouded in mist," according to one member of the pietistic German Awakening) was not "the living, risen Jesus" whom Pietists "encountered in the event of faith."

This method carries the book as far as the last half-century, where we find that theologians Donald Bloesch, Stanley Grenz, and Jürgen Moltmann owed significant debts to Pietism. In the process, Olson and Collins Winn stretch the boundaries of their definition far enough to bring Quaker spiritual writer Richard Foster into the fold ("whether or not Foster would label himself a Pietist, he soaks in and exudes a Pietist ethos").

Out of the understandable need to rescue their subject from its despisers, the authors do invite a familiar critique whenever "mere Pietism" becomes "true" or "real Pietism." I suspect that Douglas Shantz may continue to complain that Olson writes the history of Pietism via a "return to a near-pristine beginning" that "ignores the contrary evidence of Pietist behaviors, conflicts, and failings in the real world."[1] But our authors are aware of what happens when "Pietism [is] allowed to lean deeply into its own pathologies." By turns, even its best representatives can be legalistic (Francke, critiqued here by Søren Kierkegaard), so self-assured as to seem arrogant (Zinzendorf), overly emotional (Zinzendorf again), compromised by political entanglements (Wichern), given to embarrassing precision in their eschatology (Johann Albrecht Bengel), and ambivalent about the role of women in the church (most, including Spener).

For that matter, yes: they are almost all men. (Here Shantz's own Introduction to German Pietism, which includes a full chapter on gender, usefully complements Reclaiming Pietism.) That's one reason that Collins Winn and Olson would have done well to find room for a fuller discussion of the pietistic evangelicalism of 19th-century Scandinavia and its enormous diaspora. As it is, the Norwegian Hans Nielsen Hauge—who appointed women like Sara Oust to preaching and leadership positions in his movement—is mentioned only in passing, as are Carl Olof Rosenius and Paul Petter Waldenström, leaders of a Swedish revival best known for the hymns of Lina Sandell.

But that's a minor complaint offered by someone who belongs to a church founded by one group of pietistic Swedish immigrants and works at a university founded by another. There's little doubt that Olson and Collins Winn have succeeded in retrieving an important source of evangelicalism. Their book is a must-read, both for those who already "lean more toward the Pietist-Pentecostal paradigm [of evangelicalism] in terms of practice [but] know little to nothing about Pietism as a historical movement and spiritual ethos" and for their evangelical cousins "who, apart from Pietism, tend to fall into dead orthodoxy."

In the end, the primary goal here is nothing so small as winning Pietism a quicker mention in an academic conference or convincing readers to think twice before rhyming Pietism with quietism. Collins Winn and Olson write about Pietism as Pietists, "[offering] this book to the glory of God and the renewal of the church of Jesus Christ," especially the evangelical part of that body.

At a historical moment when too many evangelicals are either abandoning or winnowing the movement, Olson and Collins Winn have hope for better times, if only evangelicals would come to share their belief "that Pietism points toward a way of doing Christian theology that is more authentically evangelical than alternatives" (emphasis mine).

What is more "authentically evangelical" about Pietism? Consider Pietists' relationship with the Bible, a "steady devotion" to which gave David Bebbington one-fourth of his famous "quadrilateral"—and fractious debates over which continue to set evangelicals against each other. Pietists affirm the authority and inspiration of Scripture and emphasize the importance of its study by clergy and laity, individuals and groups. But they "loved the Bible not because it contains propositional truths about God to feed the mind, but because it is the principal medium for the Christian's relationship with God, helping to guide and develop a deep intimacy between the Christian and God."

Not to say that Pietism "[wishes] to empty the cognitive dimension of Christian faith of its importance; it wants only to put it in its proper place—as servant of God's main purpose, which is to transform us into Christ-like persons." As informed by Pietism, doctrine "should be ministerial rather than magisterial," never "put on a pedestal and venerated." Evangelical theology influenced by Pietism "avoids useless speculation" and debate over non-essentials in favor of a more "irenic and ecumenical" approach that is "informed and guided (never governed) by prayer and devotion."

Of course, one thing these and other hallmarks of the Pietist ethos have in common is that they "are always in danger of being lost and forgotten," leaving Christianity "always in danger of falling back into dead orthodoxy." Perhaps this volume will help to rescue forgetful evangelicals from such a loss and such a fall, for as fragile and fleeting as the Pietist ethos can be, it endures because it is splendidly adaptable—as capable of reinvention in response to our own "crisis of piety" as in centuries before.

Christopher Gehrz is professor of history at Bethel University; he blogs at pietistschoolman.com.