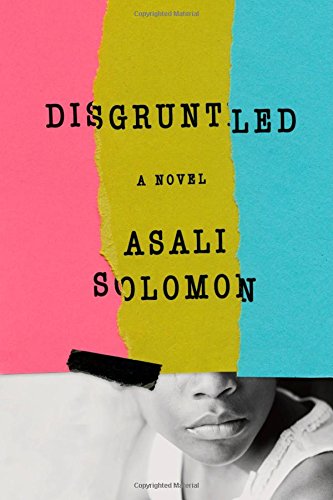 Her name is Kenya.

My husband, a psychoanalyst, once said, "You're only as smart as your pain."

I'm not exactly sure what that means, but Kenya, Asali Solomon's heroine in Disgruntled, has a lot of smarts and is in a lot of pain. In fact, she is in soul pain—the pain that comes before one even knows what it is. And pain is the dark un-melodic background dirge to this coming-of-age tale.

Disgruntled, set in Philadelphia in the 1980s, traces the arc of Kenya's young life from when she first lives with both parents, then, later, with her mother and step-father in one of Philadelphia's more upscale neighborhoods, and then as she makes her way—or tries to—on her own through various food-service jobs of the kind that America is so good at serving up.

Fortunately for the reader, Kenya is a Holden Caulfield of a girl who casts her wry gaze on everything and has an acute ear for the phoniness and double dealings of the adults and classmates around her. She is not beautiful, nor is she brilliant in the conventional sense, but through plain talk and plain-think she becomes a philosopher.

Kenya's early life is crammed with rules: no eating pork, because, as her father explains, "white people forced slaves to eat hog guts"; no watching TV shows like Good Times, because, as her mother Sheila says, "watching black people on TV acting the fool was worse than not watching any at all." "God" isn't acceptable, but "Creator" is, and forget about reciting the Pledge of Allegiance in school. With such ideological baggage, it's no wonder Kenya is an outsider: "By fourth grade she was down to one friend."

Johnbrown, her Cornell-educated father who instructs Kenya to call him Baba, takes on random menial jobs and is forever working on The Key, a sort of manifesto for black people that will combine elements of Malcolm X, Ellison, Du Bois, and others, and make mincemeat of Freud, too. He'll ...