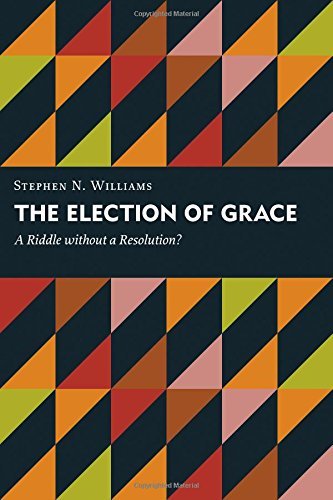 The Election of Grace: A Riddle without a Resolution? (Kantzer Lectures in Revealed Theology (KLRT))
Williams, Stephen N.
Eerdmans, 2015
240 pp., 26.00

All Called, Some Predestined

Calling a halt before the theological riddle is solved.

One more book on election? Yes, one more book on election, specifically, on the Augustinian doctrine of election. And a mighty interesting book it is: a fresh approach to the issues, in lucid and captivating prose, learned but not ponderous. And along the way, a good deal of Christian wisdom. I have some problems with the author's theses and method. But the positions he stakes out, and the theological method he recommends and employs, are eminently worth thinking about. The text is a revision of the lectures the author gave in the brand-new series, Kantzer Lectures in Revealed Theology, intended as a counterpart to the Gifford Lectures in natural theology.

The biblical narratives are replete with reports of God choosing individuals and groups for one or another purpose—calling them, electing them, selecting them. Williams says that his project in The Election of Grace is to develop a "narrative doctrine of election." I am not confident that I fully understand what he means by that. But at least part of what he means is that in articulating the biblical grounds for his doctrine of election he will give the biblical narrative "a decisive hermeneutical role," and that he will require of the doctrine itself that it articulate what he has gleaned about election from that narrative. The topic of the first chapter is thus, "Election in the Old Testament."