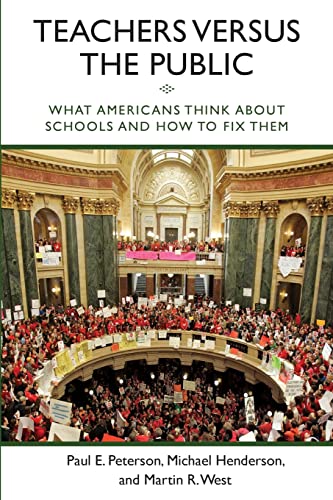 Teachers versus the Public: What Americans Think about Schools and How to Fix Them
Michael Henderson; Martin R. West; Paul E. Peterson
Brookings Institution Press, 2014
194 pp., 29.99

A compelling story needs a hero, a villain, and a plot where, of course, good triumphs over evil. Even supposedly "objective" statistical reports are often laced with such commitments. On the surface, data is called upon to speak for itself. The truth then is found in the details and readily available to individuals with open minds and disaffected hearts. Between the details, however, the temptation to oversimplify and skew the outcome may lurk.

In Teachers Versus the Public: What Americans Think About Schools and How to Fix Them, Paul E. Peterson, Michael Henderson, and Martin R. West succumb more quickly than most to just that temptation. Their title itself forges a dialectic in the minds of audience members that is then reinforced by the subtitle's promise of a solution. Read no further than page one and Chicago Mayor Rahm Emmanuel and his former colleague in the Obama Administration, Arne Duncan, rise as heroes driven by a quest for educational reform. Karen Lewis, leader of the Chicago Teachers Union, is thus cast as the obligatory villain.

In this account, Lewis enlists her colleagues in a battle to protect the status quo. Reformers such as Emmanuel and Duncan are caught trying to do what is right for children and their parents. Peterson and West, members of the Harvard faculty, and Henderson, a member of the faculty at Ole Miss, then frame this intractable situation as a political iron triangle. On one side you have teachers and the unions representing them. On a second side you have federal and state-level education agencies. On the third side you have civic, state, and federal legislative bodies.

While a concise metaphor is capable of framing a good story, the bonds forging that iron triangle in many places prove susceptible to rust if not wholesale corrosion. On one level, as quickly as that image appears, it also disappears, making only infrequent appearances throughout most of the book. On another level, the seemingly concise nature of this structure is, in the end, too simplistic to represent the dilemma Peterson, Henderson, and West seek to detail.

To open their story, the authors reflect upon the question of whether "the disproportionate power of teachers in education policy-making cause problems for democratic governance." If teachers and the public share a common vision, they believe, "there is no reason to fear teacher influence in the politics of American education." If not, "the conflict between Lewis and Emmanuel may have more general import." Unsurprisingly, they present what they believe is statistically grounded reason for fear.

To make this case, the authors acted "[u]nder the auspices of the Harvard Program on Education Policy and Governance and the journal Education Next" to gather "information … through seven annual surveys of nationally representative samples of the U.S. adult population, conducted between 2007 and 2013." In particular, they asked "about twenty-three key topics that collectively shed light on the range and depth of the divide between teachers and the public." For readers with statistical initiative, Appendix B then lists selected survey questions from those years.

For those of us with less initiative, the authors offer the results found in the body of their report in a topically organized format. For example, chapter 2 highlights, in considerable detail, salient differences between teachers and the public. Several of the topics explored include teacher policy, school choice, accountability, taxes and spending, cultural issues, and diversity. In total, the difference in responses between teachers and the public proved statistically significant in relation to 19 out of 23 questions. The use of merit pay in determining teacher salaries proved the most divisive, with teacher tenure right behind it.

Most of the subsequent six chapters then build from these observations and offer more in-depth reflections. For example, chapter 3 highlights how various demographic variables may shed additional light on this gap in perceptions. In chapter 5, Peterson, Henderson, and West ask "is it possible that information about American schools is so widely available that the provision of any new data would leave public opinion—and the divide between teachers and the general public on education issues—unchanged?" In chapter 7, they consider the extents of divisions between various groups of the teaching profession. In almost any way they sliced their data, their general finding held—a significant gap separates public opinion and the opinions of members of the teaching profession.

One striking and seemingly counterintuitive finding is the point of departure for chapter 6, which seeks to explain why "Americans tend to assign far higher grades to the public schools in their own community than to those of the nation." The explanation proposed is "that despite having a solid understanding of the overall level of performance in the nation as a whole, Americans are misinformed about where their local schools rank within the national performance distribution." When such information was provided, "the shift in opinion [in almost each case] … [was] confined to non-teachers." In essence, comparative data only drove a deeper wedge between teachers and the public.

While Peterson, Henderson, and West offer a story with all of the requisite ingredients, it comes with both superficial and substantive liberties that cannot be overlooked. On a more superficial level, as suggested above, their use of the iron triangle metaphor is haphazard at best. They initially frame their story in this way, and then conclude it with fairly consistent references. However, it fails to make explanatory appearances in the bulk of the chapters. On a more substantive level, should we be at all surprised that opinions on a host of educational matters differ between teachers and members of the public? Are the collective opinions of teachers any more different from those of the general public than comparable opinions held by lawyers, ministers, and physicians? We just do not know.

Compelling stories need more than a hero, a villain, and a plot where good triumphs over evil. They need nuance and a sophistication that makes audience members pause, reflect, and consider where they fit in such stories. No one could reasonably argue that the teaching profession is even remotely perfect, nor will characterizations of teachers as the primary obstacle to educational reform persuade many readers. In order for us to improve the quality of our schools, we need scholars to chart realistic yet hopeful paths. If the iron triangle is as rigidly in place as Peterson, Henderson, and West believe, we can only hope for its continued decay. Perhaps its collapse would allow our efforts to be more effectively directed to the common good.

Todd C. Ream is professor of higher education at Taylor University and a research fellow with Baylor University's Institute for Studies of Religion. His most recent book (co-edited with John M. Braxton) is Ernest L. Boyer: Hope for Today's University (SUNY Press).