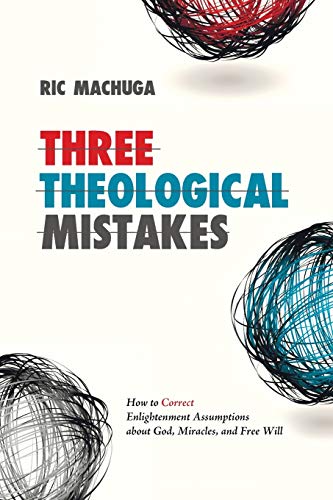 This is a guest column by Ric Machuga, professor of philosophy at Butte College in Northern California. His most recent book is Three Theological Mistakes: How to Correct Enlightenment Assumptions about God, Miracles, and Free Will, just published by Cascade Books/Wipf & Stock.

Today's creationists and their atheistic critics both share the same assumption—if God exists, then his existence must make a real, "scientifically" detectable difference. But until we begin to think more slowly about God, we will never understand the problematic nature of this assumption.

What's wrong with fast thinking? It depends on what you're thinking about. Nobel Prize-winning psychologist and behavioral economist Daniel Kahneman can help us here. Kahneman has a love/hate relationship with fast thinking. On the one hand, humans have an uncanny ability to sense anger or frustration in the first words of a phone conversation. We do this and much else with intuitive ease and alacrity. But our abilities to think quickly about other matters are strictly limited.

Kahneman asked university students to evaluate a simple syllogism: All roses are flowers, and some flowers fade quickly; therefore, some roses fade quickly. A large majority (even from Ivy League universities) missed the error in logic because they associate a true conclusion with good reasoning. But, logically speaking, it is quite possible that roses are not one of the species of flowers that fade quickly. Distinguishing valid reasoning from true conclusions is hard! We must slow down and make sure we understand what the question is before asking whether an answer is true or false.

Putting effort into what-questions is something humans do reluctantly, especially when arguing about God. In the contemporary culture wars, both sides assume that "God" refers to some sort of divine Craftsman. One side argues for, the other side argues against, the existence of such a being. But neither side has adequately addressed the logically prior question: What is God?

Our laziness has a long history. Alexander Pope famously quipped: "Nature and Nature's laws lay hid in night: God said, Let Newton be! and all was light." And what sort of enlightenment was Newton believed to have provided? It was not the sort that today's "scientific atheists" proclaim. On the contrary, Newton argued that his three laws were not only consistent with the existence of a supernatural Craftsman, but that they required such a God!

While Newton's laws precisely explained both the falling of an apple and the course of the planets, they could not explain who or what set nature on its initial course. Flick one of the planets just a little too forcibly, and it will go flying off into infinite space; flick it just a little too softly, and it will crash into the sun. For the planets to orbit the sun, the initial flick must be "just right." Without a divine Craftsman who was "very well skilled in mechanics and geometry," said Newton, nothing works.

In addition to a "just right" initial flick, the orbital distance between Jupiter and Saturn was observed to be gradually shrinking. Without the periodic intervention of God, the two would eventually collide and all hell would break loose.

A hundred years later, Pierre Laplace came to a different conclusion. He was the first to complete the incredibly laborious iterative calculations which proved that the orbits of Jupiter and Saturn were on a 929-year cycle of first expanding and then contracting. When Laplace was asked by Napoleon where God was in his philosophy, he replied, "Sir, I have no need of that hypothesis."

The irony is that while quantum mechanics, general relativity, chaos theory, the three body problem, and logistic maps have made Laplace's mechanistic understanding of the universe a scientifically dead horse, today's combatants are still fighting over the existence or non-existence of a God who is "very well skilled in mechanics." What neither side realizes is how little the great pre-Enlightenment theologians would have cared about the outcome of this debate.

Moses Maimonides (Jewish), Thomas Aquinas (Christian), and Ibn Rushd (Muslim) all understood that "existence" was not a simple Yes/No matter. While God certainly "exists," they all insisted that God's "existence" was fundamentally unlike everything else's "existence."

Of course, in one sense, Newton knew that God and his creation "existed" in different ways. Breadth, height, and weight are common to all material objects, whereas God is a pure spirit with neither breadth, height, nor weight. Nevertheless, to speak of a "very skilled mechanic" intervening to prevent planetary chaos presupposes that God and the planets exist in the same way and in the same universe.

Contrast this with the relation between Shakespeare and Hamlet. Shakespeare cannot intervene in Hamlet's life, but not because he is too distant. It is precisely the opposite. I can intervene in Sally's life, but not in my own life, since I am too close to myself. Likewise, it is impossible for Shakespeare to "step in" to Hamlet's life because, as his creator, he is always and already there! But not in the spatial sense that is the default mode of fast, intuitive thought.

And because Shakespeare is not contiguous with the world of his creature, he can have a reality, endurance, stability and "otherness" that far exceeds Hamlet's. Without Shakespeare, Hamlet is literally nothing. But without Hamlet, Shakespeare is still something, even if his glory as a playwright is slightly diminished.

Newton, on the other hand, pictured absolute space, absolute time, and God as eternally existing "things." Creation thus becomes a past event in which an infinitely big empty container all of a sudden was filled with the entire universe. When today's creationists suggest that it was God who made the Big Bang go "bang," we are right back to Newton. In both cases, our intuitions do all the work. But as Kahneman repeatedly demonstrates, these are systematically misleading when they rely on commonly associated images to answer questions requiring slower, more reflective thought.

Newton's contemporary, chemist Robert Boyle, also understood the danger of intuitive thought. Far too often, he warned, when people think about God they try "to imagine some aerial or other very thin, subtle, transparent body." This sort of intuitive thought, he continues, "comes from a vicious custom … of imagining something … , though of a nature incapable of being truly represented by any image." What's necessary is that we learn to think conceptually.

The difference between a circle and a chiliagon (i.e., a thousand-sided regular polygon) makes Boyle's point. No one can form a mental image of a circle that is distinct from their mental image of a chiliagon. But once we move beyond intuitive thought and engage our conceptual abilities we can understand the difference—one has no sides or angles, the other has a thousand sides and angles.

If God's contemporary defenders and critics are to have an enlightened disagreement, both will have to stop associating God with their image of one "very well skilled in mechanics and geometry." Only then will they understand Augustine when he said that God created the universe with space and time, not in it.