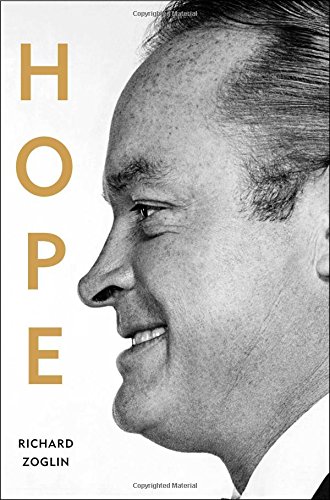 The Road to Rome

My initial reaction to the claim in the subtitle of this celebrity biography was incredulity, but Richard Zoglin has convinced me that Bob Hope (1903-2003) can fittingly be referred to as the most successful entertainer of the 20th century. This place of preeminence is secured by the heights of popularity that he achieved, the number of decades during which his star power continued to shine so brightly, and his triumphing in seemingly every possible form of mass entertainment.

That last point is particularly compelling. Hope rose to success in vaudeville, and then conquered Broadway, before proceeding to the #1 spot in radio, film, and television—holding in the top ten in all three across decades. And the half is yet untold. Hope was a singer and recording artist; on Broadway, he stole the show with "I Can't Get Started," and in his first film he did the same with "Thanks for the Memory," which became his theme song. His initial vaudeville success was as a dancer.

Hope eventually became the most successful live performer going, often setting all-time attendance records for the cities he visited. He had a regular newspaper column, and his I Never Left Home—believe it or not—was the bestselling nonfiction book of 1944. A cultural ambassador during the Cold War, he did historic shows in Russia and China. (During the Iran hostage crisis, he seriously proposed doing his 1980 Christmas special from Tehran.) Hope was considered the greatest emcee in the business—hosting the Academy Awards an astonishing 19 times—and, to bury the lede, he was "the most popular comedian in American history."

His star power is beyond reckoning. He had a personal relationship with all 12 presidents who spanned his career (Roosevelt through George W. Bush). In a tribute show for him in 1993, he was praised not only by President Clinton but by all five living former presidents. His access to the White House was so great that ...