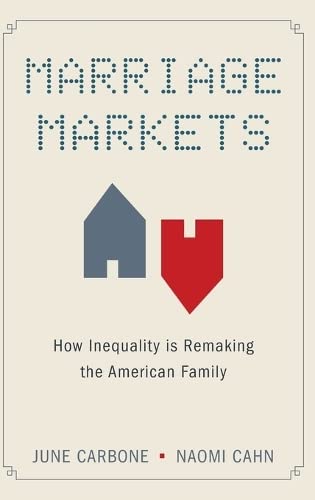 Inequality and the American Family

In discussions of income inequality, conservatives are fond of pointing out that changes in family structure explain up to 40 percent of the increase in household income inequality since the 1970s. It's not hard to see why: In most marriages, both spouses work, whereas divorced or never-married parents must support children on a single income. Two workers earn much more, on average, than one.

Less obvious is how inequality, in turn, affects family structure—the subject of family law scholars June Carbone and Naomi Cahn's new book Marriage Markets: How Inequality Is Remaking the American Family. Beyond the fact that financial strain and spells of unemployment, both of which disproportionately affect people toward the bottom of the income ladder, can lead couples to divorce or never marry at all, the growing income gaps between rich and poor shape relationships and family formation in some surprising ways. Although Carbone and Cahn tackle a number of political flashpoints head-on—not just inequality but also abortion, welfare, sex education, and more—and occasionally issue sharp criticism of those on the other side of those issues, they are eager to find areas of common ground, and their book should appeal to anyone concerned about the state of the American family. Here, as briefly as possible, is the story they tell.

In the mid-20th century, most people married someone from their hometown, or someone they dated in high school; a husband and wife did not always come from equal socioeconomic backgrounds or have the same level of education. Over the next several decades, as geographic mobility and the economic rewards of education increased, the "marriage market"—the group of single, employed, mostly young men and women looking for a soul mate and life partner to marry—has become segmented. "Assortative mating," or pairing off with someone whose education and income levels resemble one's own, has become more common, and the social and economic gaps between classes have grown.

In this context, since women tend to have incomes closer to the national mean, and since the disparity in men's incomes has grown more than the disparity in women's incomes, marriage markets at different socioeconomic levels are home to different gender ratios. At the top of the socioeconomic ladder, men outnumber women, since despite women's greater likelihood of earning a college degree, men earn more income on average. In the middle of the socioeconomic scale, women outnumber men. At the bottom, there are plenty of men, but high rates of imprisonment, unemployment, and drug use mean there are few marriageable men; thus, there too, women in the marriage market outnumber men.

These different gender ratios play a significant role in shaping relationships and family formation. In general, according to studies by sociologists, economists, and evolutionary psychologists, the scarcer sex gets to set the rules: "When women are scarce, men commit," because that's what most women want. When men are scarce, on the other hand, they play the field, hesitate to commit, and become more likely to cheat. The results are a growth in promiscuity, a decline in marriage rates, a rise in divorce rates, and deep distrust between the sexes—exactly what we see in today's poor, working-class, and even middle-class communities. Since many women in these communities want to have children but are no longer certain they'll ever marry, nonmarital childbearing is another result of relationship breakdown.

Americans at the top of the socioeconomic scale, partly thanks to a gender ratio that favors committed relationships, are living in a different world. Contra the common assumption that family breakdown has had similar effects on all social classes, the college-educated still almost always marry before having children, and they divorce at far lower rates than their less educated counterparts. The divorce rates of the college-educated have fallen significantly since the 1970s, even as they have remained extremely high among those without college degrees. Roughly half of less educated Americans say "marriage has not worked out for most people they know," while a mere 17 percent of highly educated ones say the same. Like their lower-income peers, young people in this educated group typically cycle through a few different intimate relationships prior to marrying, but their greater economic opportunities and confidence that they will someday get married mean they are more motivated and better equipped to avoid having children before marriage.

These divergent trends in family formation feed the cycle of income inequality. Educated people marry each other, hold well-paying jobs, and pool their incomes, while the less educated are lucky to find stable employment and are frequently raising a child single-handedly. The same trends also affect children, who, according to just about every available measure, are most likely to flourish if they live with their married parents. Educated, married parents expend a vast amount of resources on helping their children succeed, while single parents usually lack both the time and the money to do the same. Thus, their children grow up to mirror, or even widen, the income and education gaps between their parents.

Entangled with the aforementioned economic and family trends are changing norms and expectations, which the book also recounts. With the advent of widely available contraception and abortion, premarital sex became far more common and accepted. Women entered the workforce in huge numbers and thus no longer needed to marry for the sake of their own financial well-being—or even for their children's. In Carbone and Cahn's telling, marriage was transformed from a relationship of dependence—tying a homemaker wife to a breadwinner husband, who held all the power in the household—to one of interdependence, in which both spouses contribute to the family income, to household labor, and to caring for children.

With this transformation of marriage, single men and women began looking for different traits in prospective partners: men began to value women's breadwinning ability, while women started looking for men who would share the burden of housework and child care. Young people delayed marriage until later ages as they invested in their education and earning power (while enjoying, thanks to contraception, the intimate relationships once reserved for marriage), and they could afford to be increasingly selective about whom they would marry and whether they would stay married. Laws related to divorce and child custody were reformed in ways that reflected and reinforced these societal transformations.

Whatever their theoretical views about just and unjust degrees of income inequality, most Americans agree that the breakdown of the family and the declining economic stability of those without college degrees are worrisome trends. What should we do about them? Carbone and Cahn offer a number of policy prescriptions, from reforming corporate culture to strengthening the safety net and guaranteeing paid parental leave; all are worth consideration, but I will not delve into them here.

Americans who are leery of government programs are typically more inclined to talk about reinforcing moral norms related to sex and marriage. Moral norms matter, and they do shape behavior, but in today's environment they won't be sufficient to address family breakdown. When living up to moral norms comes to seem impossible, the norms will be widely abandoned, even if people still pay them lip service. Achieving a stable marriage is increasingly out of reach for many in the lower half of the socioeconomic scale, so we should not be surprised that saving sex and childbearing for marriage is no longer common in that group.

If we wish to help restore the links between sex, marriage, and having children, we must not only preach about them but also find ways to support the couples who lack the personal skills and financial stability necessary for a strong marriage. Talking about why single motherhood is a problem without making marriage more accessible or supporting single mothers could even do more harm than good, increasing the likelihood of women having an abortion rather than motivating them to marry.

In addition to providing moral formation and practical support for struggling couples, and advocating related public policy reforms, we should reexamine what's essential (and not essential) to a Christian marriage. Some Christians and non-Christians alike seem to associate Christian marriages less with certain virtues than with a breadwinning father and homemaker mother—a model that is not financially tenable for some couples, and not desirable to others. We should by all means make it possible for parents who wish to do so to leave the workforce and devote themselves to raising their children. But as traditionally male economic sectors shrink, and since women are now more educated on average than men, insisting that men retain their 1950s role as chief breadwinner and that women stay out of the workforce entirely will make financial—and thus marital—stability even harder for many families to achieve.

Anna Sutherland is editor of the Institute of Family Studies blog (@FamStudies).