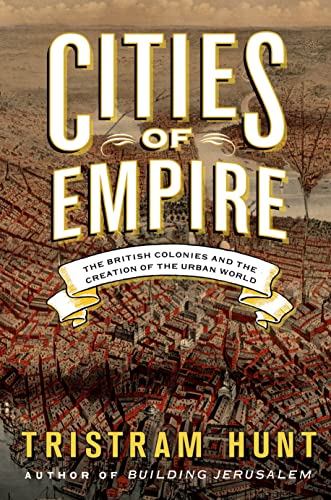 Cities of Empire: The British Colonies and the Creation of the Urban World
Tristram Hunt
Metropolitan Books, 2014
544 pp., 35.00

How the British Empire Got Its Spots

One way to understand Tristram Hunt, a member of the British House of Commons and of any future New Labour government as well as a mere university lecturer in British history, is to think of him as a member of the "urban gentry." The term was coined by Hunt's teacher, the historian Gareth Stedman Jones, to describe the cluster of clergy, writers, and public moralists in Victorian cities who explained to their contemporaries the problems of urban poverty and class conflict and how government might fix them. Living in terraces or villas rather than lording it over broad acres like the old gentry, they nonetheless inherited their self-assurance and their paternalism.

As a historian of Victorian urbanization, Hunt not only writes about this class but resembles it in his privilege and in his anxiety to improve urban life. The son of a Labour peer, educated in Hampstead and at Trinity College, Cambridge, he worked for a progressive think tank before studying for a doctorate under Stedman Jones on civic pride. His first major work, Building Jerusalem: The Rise and Fall of the Victorian City (2004), was not much interested in the messy processes through which Britain's industrializing cities grew. Instead it charted the hope that they could be turned into healthy, morally vital places. It presented architecture as the built expression of that hope: the classical pillars and Gothic spires that eventually filled Manchester or Leeds expressed the commitment of their citizens to turning turbulent, stinking places into gracious public spaces. Hunt's history was also policy: Building Jerusalem ended with the aspiration that the battered architecture of Victorian cities and the social zeal it had represented could be revived by government investment. Elected in 2008 as mp for Stoke-on-Trent, a declining town in England's rustbelt, Hunt has been able to lobby for his vision, talking up the town's ceramics industry and its Wedgwood museum. Yet the subsequent fall of Gordon Brown's Labour government and the global financial crisis have dented Hunt's hopes. A new sense of the limits on the power of the ideals that both British cities and the British state have represented haunts Cities of Empire: The British Colonies and the Creation of the Urban World, which resembles Hunt's earlier work in connecting the urban past with the political present but is infinitely more disillusioned in its account of both.

Proposing urbanism as a chief feature and legacy of British imperialism, Hunt picks ten cities from around the world and asks what their architecture—"mental" as well as physical—tells us about their empire from the 16th to the mid-20th centuries. He joins the debate initiated by Niall Ferguson over whether the British Empire benefited either the British or the people they colonized. The debate touches Hunt personally, for the book's preface reveals that he is officer class as well as urban gentry: his grandfather occupied a string of imperial posts, ending his career as high commissioner in Trinidad and Tobago.

Hunt's chosen cities give us two sorts of information about the Empire: which interests it served but also what the dominant "justifications" for it were. The distinction is important. Imperial historians have always argued that the Empire was not one but rather many rival and interlocking projects: economic, military and religious. On the one hand, there were always domestic élites as well as traders, settlers and colonized collaborators who saw empire as an engine of profit. Hunt identifies them as the prime makers of some of his cities. Boston, Bridgetown, Dublin, Liverpool and Hong Kong all appear as monuments to the imperialism that Marx (much quoted in Hunt's pages) called primitive accumulation, as well as its corollary, exploitation. Bridgetown in the Caribbean was built around a cage for runaway slaves, while Hong Kong was initially a cluster of warehouses for opium traders seeking to peddle their dope to China. Yet Hunt shows that military men and idealistic proconsuls might be just as or more important in steering the Empire or developing its cities than the traders. Cape Town began life as a loss-making staging post for British forces, while the main mover in creating 19th-century Calcutta, the Marquis of Wellesley, was determined that palaces rather than counting houses should dominate its skyline.

Hunt recognizes that in practice, economic, ideological, and strategic motives for the development of his cities can be teased apart in analysis but coalesced in time. In Victorian Melbourne, for example, good transport links generated extensive suburbs with elaborate, roomy houses. Yet suburban living became an imperial signifier as well as an economic fact, redolent of the domesticity that would supposedly preserve the Empire from degeneration and supply it with fresh-faced soldiers for the armies during World War I. If the pattern is complex, Hunt nonetheless makes good on his promise to trace a trajectory or "story": as the Empire got bigger and so more vulnerable over the 19th and early 20th centuries, so its cities hosted more elaborate but also more brittle justifications of its existence. If 17th- and 18th-century colonial cities were often brutal and chaotic, then they could also be racially mixed and vibrant places. By contrast, cities tidied up in the 19th century, such as Bombay, or planned from scratch, such as New Delhi, enshrined racial segregation. Early 20th-century New Delhi's white bureaucrats worked in splendid buildings by Edwin Lutyens but rarely mixed with the people they ruled. They were over-dressed, over-fed slaves to etiquette. In Building Jerusalem, architects and planners were heroes who imposed order on a chaotically industrialising Britain. In Cities of Empire, they are all too often despots or allies of despots. The evangelical and utilitarian administrators of mid-Victorian Bombay built sewers for their city, for example, but their convictions blinded them to the suffering inflicted by free market policies on its rural hinterland.

Yet urban despotism was always qualified by the limits inherent in imperial power. Hunt argues that imperial cities came to work in ways that suited colonized locals and inventive incomers rather than stuffed-shirt administrators. The equestrian statue of the Prince of Wales put up in Bombay in 1879 may have looked like an imperial icon, but it was paid for by Sir Albert Sassoon, the son of an Iraqi Jewish merchant.

The most obvious demonstration of an empire's fragility is its collapse, a process from which British city-dwellers could suffer as much as anyone. Hunt describes the legacies of empire to Liverpool as racial tension, with locals high on imperial chauvinism resenting black and Chinese incomers, and economic implosion, as business switched to ports better placed to trade with the Continent. In a twist which illustrates that the British have decisively forfeited control over a world economy that they once sought to structure for their benefit, local authorities in Liverpool are seeking to sell off defunct industrial infrastructure to investors from cities founded or fostered by the British, such as Shanghai and Hong Kong. Hunt's brief sketches of visits to his cities today—which offer sententious accounts of how newly independent Americans, Indians, or Irish have destroyed or exiled statues, repurposed palaces, and renamed streets or even cities—further emphasize that empires are better at creating infrastructure than in dictating how their subjects ought to regard or use it.

Cities of Empire is an enjoyable tour of some fascinating cities, offering vivid illustrations of what the British Empire was like as well as shedding light on the continuing struggle of Britain's élite to understand and perhaps to exorcise their imperial past. It should be said that it is a thinner and less reflective work than its laudatory British reviews imply. The footnotes show that most of the stories and much of the interpretation come from existing works of secondary literature, while many of Hunt's site visits were evidently too hurried to offer much insight. Even the reading of Hunt's beloved buildings can be crude, because over-determined by the bigger argument. The abandonment of Lutyens' scheme for a Catholic cathedral in Liverpool and its replacement with an "ungainly modernist design" by Frederick Gibberd thus becomes an "ominous … sign" of the city's decline. That is an aesthetic judgment rather than an historical one. "Paddy's Wigwam" symbolized to contemporaries the modernization of the Roman Catholic Church rather than Liverpool's imminent collapse.

Indeed, Hunt's readers may finish his book unclear about how much his cities really explain about empire. An empire's ideology may be "made flesh" in cities, but this hardly means that the reasons for its inner coherence can be recovered from any one city, or even ten in a row. A French, Russian, or Austrian reader might ask how satisfying an account of the "urban world" can be which attends only to its British sections. If Cities of Empire promises an argument about how the British Empire held together and with what consequences, then it comes to seem more like a pageant of its vices and virtues. As with most pageants, the effect is initially diverting, but finally monotonous.

Michael Ledger-Lomas is lecturer in the History of Christianity in Britain at King's College London.