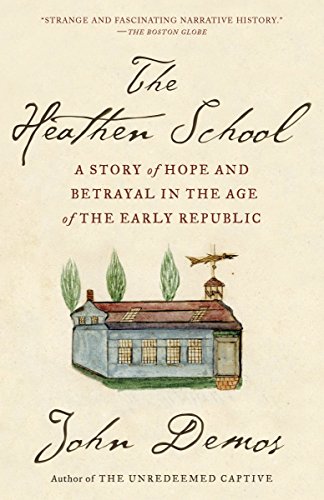 "A seminary for the education of heathen youth."
May/June 2015

Great storytellers make even the dullest tales captivating. They transform mediocre material into bestsellers and award-winning analyses. And when such a storyteller meets an exciting tale, the results can be riveting. Take historian John Demos, for example. As his body of work illustrates, Demos is clearly a masterful storyteller. More than that, though, as anyone who is familiar with his Unredeemed Captive or Entertaining Satan knows, Demos also selects tales that beg to be told. The Heathen School, his most recent offering, is no exception. Tracing the history of the Foreign Mission School in Cornwall, Connecticut, from its infancy to its demise, Demos brings together the 19th-century worlds of white American evangelicals and "heathen" students from the Pacific Islands, India, China, and the indigenous peoples of North America; at the same time, through the book's structure he also demonstrates some of the ways his method of research and writing allowed that past and his present to coincide. Where those worlds met, Demos crafted a narrative that examines the intersections of various themes of the early American republic (and beyond), including the idea of America as the exceptional and redeemer nation, how such concepts influence (then as well as now) the ways we understand and treat those "others" living as our neighbors both at home and abroad, and more.

Demos' ability to take his readers into the various worlds of the 19th century that came together in Cornwall, Connecticut, in 1816 allows him to weave together the strands of the then-fledgling nation's entrance not only into the worlds of the industrial revolution and imperial ambitions but also into the world of a new missions movement. As the United States entered more fully into the "China Trade" early in the 1800s, the notion of America as an exceptional, integral part of redemptive history captivated many of the nation's political, industrial, and religious leaders. For those not mesmerized initially, Henry Obookiah made clear the possibilities. Much of the first half of The Heathen School focuses on the experiences of this long-forgotten but once celebrated Hawaiian emigrant and student. And, in Demos' hands, his life remains as fascinating in the 21st century as it was in the 19th. Encouraged by the spiritual conversion and intellectual promise of Obookiah, the Congregational American Board of Commissioners for Foreign Missions (ABCFM) became convinced that a school committed to providing such men a Christian education was both a necessary and a proper thing.

From the beginning, the ABCFM envisioned this institution as a means to prepare native converts to be "instruments of civilizing and Christianizing their countrymen." The missions board set out to raise funds for the venture, and in 1816, the Foreign Mission School opened with Obookiah and several other Hawaiian natives as members of its first class. While the connections of this "Heathen School" with 19th-century evangelicalism's major figures (such as Timothy Dwight and Lyman Beecher) and movements (such as the Second Great Awakening) remain major components of Demos' story, he works diligently to keep the focus of the historical narrative on these lesser-known students and their lives. He shows how these young men were vital to the school's success—as pupils and as spokespersons and fundraisers. In such a way, the scholars of the Foreign Mission School stood out as exceptional and as agents of redemption, reflecting the manner in which many white Americans thought both of their county and of their religious institutions.

These first students and advocates paved the way for future students from around the globe, including several children of some of the leading figures of the Five Civilized Tribes of the American Southeast. Figuring prominently among these later students were several of Cherokee descent, most famously (or perhaps infamously), John Ridge and Elias Boudinot. Demos makes clear in The Heathen School that the arrival of these Cherokee students can't be seen apart from the growing tensions between US citizens and Native Americans.

In the New England communities surrounding the Foreign Mission School, these tensions exploded as the first relatively peaceful years of the institution gave way to fears that the Foreign Mission School was at the very least providing opportunities for inter-marriage between Indian students and white Americans. Possibilities became realities as several relationships and lasting marriages developed between Cherokee students and girls from the surrounding families; in response, the ABCFM took a public position against such marriages. This stance not only compromised mission efforts among the Cherokee but also paved the way for the failure of the Foreign Mission School. That outcome was mirrored on the national scale when contested negotiations led to the organized removal of the Cherokee people from their ancestral lands to the Oklahoma Territory—a removal negotiated in no small part by the leadership of former "Heathen School" students Ridge and Boudinot.

Linking the earlier exceptional and potentially redemptive "successes" of the Foreign Mission School and its later failures, Demos ponders a perennial challenge: how to "deal with others who are manifestly different from ourselves." Certainly mixed-race marriages stood as one of the primary places such differences mattered in the era of the early American republic, as the responses of people in the communities surrounding the Foreign Mission School make clear. Demos' account of the initial visceral responses of family members of Sarah Northrup and Harriet Ruggles Gold to their respective marriages to John Ridge and Elias Boudinot, as well as the decision of the community to burn Harriet and Elias in effigy, illustrates the all-too-common reactions of 19th-century white Americans (or 21st-century Americans) when "others" appear to pose a threat. (Demos might have added that the practice of giving many of the early students Christian names when they enrolled in the school was yet another way in which white Americans of the early republic manifested their unease with these "others" even as they brought them into their communities.)

As he did in Unredeemed Captive, Demos organizes The Heathen School in a rather unorthodox manner, alternating between analytical chapters and memoir-like "interludes" focused on his personal interactions with the spaces his subjects occupied in their own times. Demos also incorporates "vignettes" into his analysis to explain more intensively some of the events and individuals in his narrative. While some readers will find these interludes and vignettes occasionally distracting, the overall effect of The Heathen School is arguably stronger because of Demos' decision to interact with his primary sources and subjects in this manner. He invites his readers to think about the men and women connected with the Foreign Mission School outside their own historical contexts. By doing so, he shows that history and historical subjects more generally remain relevant outside their specific time and space. History matters. Demos knows this well, and he wants his readers to know it, too.

You could say he succeeds almost too well. The broader story he tells about the Foreign Mission School and its students is fascinating—so fascinating, in fact, that I closed the book longing to know more about many of its pupils, especially those whose roles, unlike those of Ridge and Boudinot, aren't as well known in the narrative of American history. Such a more focused treatment, of course, would result in a very different sort of book. And, as it is, The Heathen School is a good and needed book. But I hope that others will be spurred by Demos' example to tell more of the tales of these "heathen youth."

Richard A. Bailey is an associate professor of history at Canisius College in Buffalo, New York. His book Race and Redemption in Puritan New England (Oxford Univ. Press) was reissued in a paperback edition last year.