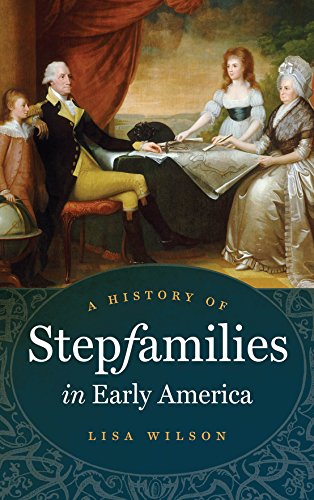 A History of Stepfamilies in Early America
Lisa Wilson
The University of North Carolina Press, 2014
172 pp., 37.50

It is a colonial commonplace that the metropole is described as "the mother country." The metaphor tells a particular story about a country and her colonies: the imperial country will care for and nourish the colonies, and see to the needs of the (infantilized) people who live there. In the 17th and 18th centuries, English men and women living in the American colonies embraced the metaphor—Anne Bradstreet, for example, wrote of England as the mother and New England the daughter. And during the American Revolution, the metaphor proved useful for Patriots who sought an emotionally trenchant expression for all the ways the Mother Country was failing her children. As early as 1765, John Adams asked if "Britain is the mother and we are the children … have not children a right to complain when their parents are attempting to break their limbs?" In New York, James Duane glossed the Revolution as a "family quarrel." Lisa Wilson's fascinating new study, A History of Stepfamilies in Early America, adds this delicious detail to the story of family ideology in American political discourse: during the Revolutionary Era, Americans began to characterize England as a stepmother. As the taxation debates roiled, William Williams, Connecticut's agent in London, claimed that America now had a "Step mother country." And Adams himself, after signing the Declaration of Independence, bid farewell not to a cruel and abusive mother, but to a stepmother: "Farewell! Farewell, infatuated, besotted stepdame," he wrote, using the term that, according to Wilson, was the "most negative of terms for a stepmother."

These stepfamilial epithets had such purchase in part because in early America, step-families were everywhere. As Wilson shows at the outset of her monograph, many of the Founding Fathers presided over, or were raised in, stepfamilies. James Madison was the stepfather of the son born to Dolley Madison during her first marriage (indeed, Madison sold off his Virginia plantation in part to meet his stepson's gambling debt). In contrast to 21st-century stepfamilies, which tend to follow divorce, in the 18th and early 19th centuries stepfamilies were typically created after a death. When Paul Revere's first wife died, he married Rachel Walker, who raised the eight children born to Revere and late wife and gave birth to eight of her own. Most strikingly, America's "first, first family"—that is, the Washingtons—was a stepfamily. Martha Dandridge Custis was the widowed mother of Jackie (age six) and Patsy (four) when she married George Washington in 1759: Washington, "the Father of Our Country," writes Wilson, "was a stepfather."

Despite their ubiquity, argues Wilson, "stepfamilies were … the subjects of ridicule" and "prejudice." Disdain for stepfamilies was not new, but in the 18th century, she argues, "prejudice against stepfamilies found a new life" because notions of what the proper family looked like were changing. Increasingly, prescriptive writers, moralists, and clergymen—and many of the men and women who read and listened to them— embraced the "sentimental" family, in which husband and wife were married not because it made economic sense but because they tenderly loved one another, and in which their attentions were fixed on raising children "with love and constant attention." This idealized family stood in stark contrast to the man or woman who hastily remarried before the funeral meats were consumed.

Second husbands and second wives both labored under suspicion and mockery. Men marrying widows were sometimes thought to be gold-digging scoundrels, who might mismanage the estate left by a widow's first husband. Underpinning the anxiety about stepfathers were laws governing property. In short, the widow of a wealthy man was very often wealthy herself—and in control of a significant amount of property for the first time in her life. But when a woman married—any woman, not just a widow—she became a "feme covert," literally a covered woman; that is, she gave up ownership of her property in exchange for presumed protection and support by her husband. Typically, widows inherited a portion of their dead husband's estate outright, and they also held the right to use some of the real estate during their lifetime—to live in their marital home, keep farming its land, and so forth. Upon the widow's death, the real estate would pass to the children of the widow and her dead husband. "The idea," explains Wilson, "was to provide for [the widow's] needs and those of her fatherless children both before and after her death." Stepfathers could subvert these legal protections in all kinds of self-serving ways. Most straightforwardly, a new husband could simply fail to care for the real estate, letting it fall to wrack and ruin. Sometimes the financial damage done to widows and their children was far more severe. Wilson tells the grim story of a Connecticut widow who married a lawyer quite soon after her first husband's death; she signed a prenuptial agreement that at first blush appeared to safeguard her and her children but in fact favored her new husband, who, Wilson says bluntly, "went beyond wasting his stepchildren's estate—he stole it."

Men—potential second husbands and stepfathers—could be unscrupulous, but the blame for the disasters that occurred when second husbands mismanaged or stole their predecessor's estate routinely fell on women. "Cautious widow[s]"—prudent and temperate widows—would take their time finding a second husband. They would carefully make sure that they were handing over their (and their children's) property to someone who would steward it well. And if a woman was not thus cautious? If she raced into a second marriage with an unsuitable rake? Well, she only had herself to blame—herself and, specifically, her libido. "Writers wondered what widows could gain through remarriage that would justify the risk to their husband's legacies," explains Wilson. "[O]nly a selfish need for sexual companionship could explain such potentially perilous behavior. In the public imagination, the awakened sexual appetites of formerly married women forced them to seek out inappropriate partners as soon as possible." Marry in "lusty haste," repent at leisure.

The trope of the sex-crazed widow brings us back to that even more notorious figure, the wicked stepmother. Women became stepmothers in large measure because men needed women to mother the children born to dead wives. The diaries and letters of bereaved widowers, many of whom remarried before their first wives were cold in the grave, suggest the intensity of men's concern that they find "a loving and careful Mother" to tend their bereaved brood. Even relatives of the dead first wife urged widowers to remarry. For example, when Mary Hubbard's daughter died, she reminded her son-in-law that he must find another wife; "[t]hat you may make a good choice & select a mother that will be kind & attentive to your children … is the fervent wish of your Friend & Mother."

Men were encouraged to find stepmothers for their children—but the women filling the role were often vilified, castigated as manipulative shrews who would turn fathers against their children, and who could never live up to the children's "natural mother." As one early American writer put it, stepmothers ignored "the tender complaints of hapless children," instead devoting their days to "petulant scolding," "malicious threatenings," and "haughty commands," regularly turning their "fiery eye-balls" and "fierce grimace" toward their charges. This stereotype was right at hand when American patriots needed a way to evoke "the mother country [having] become abusive and neglectful, the opposite of a good … mother."

According to the Pew Research Center, 42 percent of adults, and 52 percent of people under 30, have at least one step-relative. (These are probably low estimates, because demographers and pollsters tend to count a child as part of a stepfamily only if she lives with a remarried parent; if you are the non-married custodial parent of your daughter, and her other parent is remarried, she is not likely to make it into studies as belonging to a stepfamily.) Lisa Wilson is writing principally as a scholar interested in early American law and family—but, as she tells us on the first page of the book, she is a stepchild herself, and her "deep personal experience with stepfamilies" animated her research. In 21st-century America, as in early America, we continue to worry about what good families, ideal families, authentic families look like. The history Wilson traces provides a rich and deep context for those ongoing, often fraught, conversations.

Lauren F. Winner is assistant professor of Christian spirituality at Duke Divinity School. She is the author most recently of Wearing God: Clothing, Laughter, Fire, and Other Overlooked Ways of Meeting God (HarperOne).