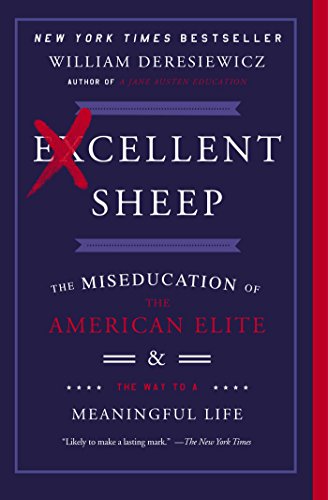 Excellent Sheep: The Miseducation of the American Elite and the Way to a Meaningful Life
William Deresiewicz
Free Press, 2015
256 pp., 18.00

The pathologies of élite education.
May/June 2015

A colleague recorded this lament by a female Ivy League student during our research project examining how college students think about purpose. As one would expect from an Ivy League student, she relentlessly pursued personal accomplishments. Yet, on her way to climbing the ladder of success, she suddenly realized she had no idea where it was taking her.

William Deresiewicz relishes exposing us to many of these students in Excellent Sheep. Indeed, Deresiewicz boasts that his book listens to students and tries to speak to them. Yet, while Deresiewicz does give us juicy quotes and stories, his critique of how élite education stupefies students largely reads like a series of sermons. Furthermore, like too many sermons, the book contains an entertaining but dangerous mix of sensible advice, ideological diatribe, insightful wisdom, and perilous generalities.

The generalities begin with Deresiewicz's definition of the élite: "The whole cohort of people who went to selective colleges and are running society for their own exclusive benefit." This sort of agitprop may ensure his street cred, but it does not prove helpful in building sophisticated forms of empathy and understanding.

Still, Deresiewicz does undertake one difficult task regarding empathy. He wants us to feel sorry for élite college students, and he almost succeeds. These poor students, he relates, are stressed out, overworked, aimless, lacking purpose and fearful of the future. Eve, a girl taking four advanced placement courses in her junior year (and planning to do seven her senior year!) tells him, "I sometimes have two or three days where I only get two hours of sleep per night… . I really fear failure… . I am just a machine with no life at this place." She's also considering suicide, she says. After reading about students like Eve and the qualifications to gain admission to an Ivy League college (ten to eleven extracurricular activities), I wondered why any sane person bothered with this process—"the mania," Deresiewicz calls it. But then my own memories from high school hit me. I personally had ten to eleven extracurriculars—and enjoyed it! Interestingly, we do not hear about this side of the story.

Since Deresiewicz portrays the kids primarily as achievement slaves, it is no surprise the parents he presents are a mess. They're scared. "Social mobility has stalled. The global playing field is getting ever more competitive. The middle class is hanging on by its fingernails." So parents drive their kids. They make them addicts. They hook them on the drug of praise and feed them narrow purposes for education. A teacher of a preparatory school tells the author about a boy breaking down because he felt forced to be a stockbroker like his parents. The mom later called the teacher that night and told him, "Don't put any ideas into his head." Yet again, I wonder if Deresiewicz's worldview stains his depictions of these parents. In one vulnerable moment, he admits that reading Amy Chua's story of a demanding, high-achieving parent and her children, Battle Hymn of the Tiger Mother, "felt like reliving a childhood trauma."

The college system fares no better in this horror tale. Deresiewicz claims the system "forces you to choose between learning and success." He shares a story of a student at Amherst who didn't come for writing help until after getting into medical school, because he only felt free to learn after gaming his admission to the next stop on the ascent to success. Deresiewicz's negative generalities pertain particularly to ways college students deal with big questions. Colleges, he argues, fail to address students' "larger questions of meaning and purpose, about their education and their lives."

Here Deresiewicz's narrative conflicts with my own research about meaning and purpose. Jonathan Hill (Calvin College) and I recently asked 110 students at ten institutions (including a dozen Ivy League students) about what they saw as the purpose of higher education. Three out of four expected their university education to address larger questions of meaning and purpose. Moreover, ten percent reported a conversion experience during college through which they came to understand that higher education is about more than getting a job. We would wager that most churches wish they had that kind of conversion rate.

Interestingly, students in our study who attended secular institutions had the least expectation that college would explore deep issues of meaning and purpose. To his credit, Deresiewicz acknowledges this: "Religious colleges," he writes, "often do a much better job" when it comes to matters of meaning and purpose. Yet, he never considers why religious colleges succeed where élite institutions don't.

If Deresiewicz's empirical analysis is a bit one-sided and limited, his proposed solutions for redeeming the whole process are much better. For example, he succinctly summarizes one key job of professors for students: "You want some people in your life whose job it is to tell you when you're wrong." Moreover, instead of mouthing the usual pieties about how a liberal arts education helps you become a citizen or leader, Deresiewicz focuses instead on the idea that education actually is meant to help students "build a self." Or, in a phrase he borrows from the poet John Keats, it is about "soul-making."

Although Deresiewicz is not religious, he loves this religious language and resorts to it to describe the university's purpose. College, he claims, is a "pilgrimage" and ideas are "instruments of salvation." We are born into a culture that becomes our second nature. To be free from unthinkingly accepting this nature, college helps us, through grace, become "born again." After all, Deresiewicz preaches, "what does it profit a main if he gains the whole world and loses his mortal soul."

Although Deresiewicz talks of intellectual salvation as an expression of grace, in his telling it really comes through mere force of will. You make choices. For example, if you want true self-esteem you must recognize that "despite all you've been trained to believe, the grades you get do not define your value as a human being." A wonderful sentiment. But what makes it true? Apparently, student choice. Intriguingly, Deresiewicz writes, "I've found that religious students are the ones who possess the greatest degree of moral autonomy, are most indifferent to outside approval." Deresiewicz attributes this moral autonomy to their abstract ideals and not a relationship with a Creator who values and loves you (no matter what choices you make).

What he leaves us with is romantic existentialism: "the reason to invent your life—whether you aim at remarkable things or only at your own thing—is so that it will be your life, your choice, your mistakes." This is like offering free beer to budding American narcissists from élite schools.

To be fair, Deresiewicz points out that such decisions may prove costly. Personal redemption of self by choice may require suffering. In light of this reality, to succeed in Deresiewicz's narrative students will need the virtue of courage and the skill of moral imagination. Faith, hope, and love take a back seat to knowing how to stand up to your élite parents and élite culture and having the courage to follow your passions toward something you create.

Ironically, for all of Deresiewicz's progressive leanings, the ultimate solution he envisions is a thousand-year-old conservative answer: students need a liberal arts education. He helpfully provides all the latest statistics and stories about how marketable liberal arts majors are in case students' courage to pursue big dreams wavers.

He also reminds students that we (that is, sensible modern people) have altered one key part of this traditional answer. Religion used to address the big questions about how to think about meaning, purpose, and the good life beyond a career. Today, however, the humanities offer the good news: "Now we teach the Bible not as scripture, but as culture." What is not mentioned in this tidy narrative is that "we" don't all approach the humanities in the same way. Instead, Deresiewicz offers a comforting narrative of progress, "The minister in the college chapel, preaching doctrine, gave way to the professor in the classroom, leading a discussion."

The professor of literature in particular is the redemptive hero in this narrative (this is, just by chance, Deresiewicz's vocation as well). Through books, the humanities professor helps us experience "what reality feels like." What Deresiewicz means is that literature in particular and art in general allow us "to experience, in the most intimate and immediate way, what it feels like to be someone else… . [It] instills the most fundamental moral lesson: That you aren't the center of the universe." Deresiewicz unabashedly believes that a humanities-based liberal arts education sanctifies a person and makes one a better human being.

How do we get from the current state of affairs to the ideal university system Deresiewicz envisions? He doesn't tell us in any detail, instead unleashing an unconventional assault on the way that élite colleges and universities exacerbate the income gap and reward privilege. Title IX, he notes, "has basically become an affirmative action program for rich girls." Likewise, he observes, "diversity of sex and race has become a cover, and an alibi, for increasing economic resegregation." Deresiewicz bashes the idols of today in defense of economic justice for the poor. The most disadvantaged group, he notes "are working class and rural whites." Like a prophet in the Hebrew Scriptures, he raises his voice against the privileged: "Brilliant, gifted, energetic, yes, but also anxious, greedy, bland and risk-averse, with no vision and no courage—that is our elite today."

To avoid being an "entitled little shit" in the hell of élite education, Deresiewicz advises students to empty themselves of their pretentions and go live among the people: "transfer to a state university." This kind of self-giving may prove difficult. As he notes, only one member of the president's cabinet attended a state university. If one comes down among the salt of the earth, there may be no going back to the heaven of power and influence. What would be the motivation for that? I would not bet on romantic existentialism. Motivating élite students to engage in sacrificial, incarnational love for others will likely require a different Spirit.

Perry L. Glanzer is a professor of educational foundations and resident scholar with the Institute for Studies of Religion at Baylor University.

This review seems to be petty and mean-spirited. I do appreciate the combined insights that emerge from Deresiewicz's and Glanzer's expertise and research. I feel this review makes a great contribution to public discourse on the critical state of higher education despite the apparent meanness. While Glanzer may have been underwhelmed by the post-modern fluff behind Deresiewicz's attack on educational elitism, I am dismayed by the Calvinist antipathy to free-will permeating this review. Buzz-words leaked through and show the real reason (possibly besides jealousy) behind Glanzer's dismissive analysis. Follow-on research ought to be done on how elite academia has hijacked even low-prestige educational programs and allowed critical thinking standards to become a distant and misunderstood memory. A friend of mine is halfway through Baylor's Law School and only yesterday told me he wouldn't recommend the program due to the reek of elitism throughout the school. But where else is better?