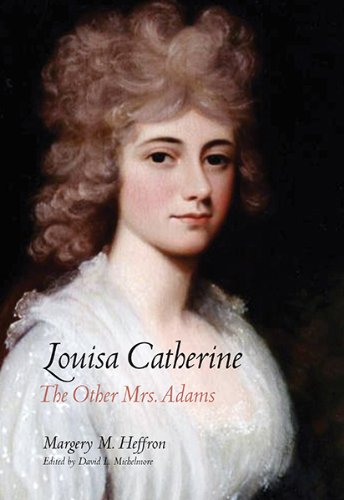 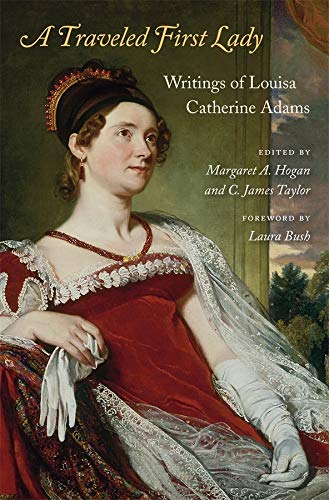 The Other Mrs. Adams

Louisa Catherine, that is.
March/April 2015

Louisa Catherine Johnson Adams has long been an unjustly overlooked First Lady. Married to John Quincy Adams in 1797, she served a long and substantial apprenticeship for her role as First Lady, beginning with her years as the wife of the U.S. Minister Plenipotentiary at the royal courts of Prussia (1797 to 1801), Tsarist Russia (1809-15), and Great Britain (1815-17). For the eight years of James Monroe's presidency (1817-25) she was the wife of the secretary of state, in which capacity she served as an almost de facto First Lady, recognized as the leader of Washington society, setting precedents controversial at the time for entertaining foreign dignitaries and congressional leaders, hosting balls with hundreds of guests, and winning her rivalry with the wives of other cabinet secretaries. The climax of this role occurred on January 8, 1824, when the Adamses gave a giant ball for a thousand guests in their F Street mansion to honor the ninth anniversary of Andrew Jackson's victory at the Battle of New Orleans. (John Quincy had hoped this gesture might encourage Jackson to become his running mate in the election that fall, but of course Jackson intended to run for president himself.) Washingtonians remembered the ball for many decades afterward. In retrospect, Louisa Catherine Adams remains one of the major First Ladies of the 19th century, comparable to Dolley Madison.

Two new books from Yale and Harvard presses should remedy the neglect of Louisa Catherine Adams, even though—unfortunately—neither one deals directly with her years in the White House. Margery Heffron's biography, Louisa Catherine, was tragically left truncated when the author died in December 2011, just at the point when her narrative would have taken up John Quincy Adams' election as president. LCA herself wrote neither a diary during her husband's presidency nor a memoir about it later, so there is nothing from this period in the volume of her writings edited by Margaret Hogan and C. James Taylor. (It would be surprising if no letters she wrote as First Lady survived, but Hogan and Taylor make no mention of this.)

Religion provides one of the significant aspects of LCA's career here recorded. Raised in the Church of England, though she attended a Roman Catholic convent school during the part of her childhood spent in France, she retained her Episcopal identity even after marrying into the Congregational Adams family. The half-century primarily covered by the two books under review, 1775 to 1824, was also the period when the Congregational Church split first into Orthodox and Liberal wings and finally into two separate denominations, one remaining Congregational and the other becoming Unitarian. The Adamses and their local church in Quincy, Massachusetts, followed the Liberal and then the Unitarian persuasion. But Louisa Catherine herself remained aloof from this development, continuing to attend Episcopal services when the opportunity presented itself. Her private comments deplore Unitarian theology, even though she could praise the sincerity and devotion of individual Unitarians (who included, of course, her husband). Religion clearly played a part of day-to-day importance in LCA's life; many of her journal entries take the form of prayers.

Louisa Catherine Adams alludes to political issues in her writings, particularly the Missouri Question. Her family were originally from Maryland and went back there after her father's European business failed. She shared her husband's strong anti-slavery principles yet once confided mixed feelings to her journal, because she knew at first hand that southern whites feared emancipation would lead to race war (LCA, Dec. 24, 1835). She deplored the decline of American politics since the days of Washington, blaming it on factionalism and (after 1829) on the rise of political parties. She strongly urged her husband to campaign more overtly for the presidency in the run-up to the election of 1824, though he resisted her advice out of high principle. He eventually won when the House of Representatives chose him on the first ballot in February 1825, the only time since the passage of the Twelfth Amendment that the Electoral College has failed to deliver any candidate an absolute majority.

In private life, Louisa Catherine Adams was often very unhappy. Her husband insisted on leaving two of their boys, aged six and eight, with his parents while he and she went off to European diplomatic duties for the next six years (1809-15). In the words of her biographer, LCA "never forgave him—or herself: 'Oh this agony of agonies! Can ambition repay such sacrifices! Never!! And from that hour to the end of time life to me will be a succession of miseries.' " Fulfilling her prophecy of misery, those two sons both died in their twenties, one of them in an accident that may have been a suicide, the other an alcoholic. LCA also suffered several miscarriages, a stillbirth, and the death of her one-year-old daughter. Only one of her offspring, Charles Francis Adams, survived to have the distinguished career his parents desperately wanted for all of them. LCA's father's business failure prevented him from paying the dowry he had promised her, which she felt for many years as a humiliation, even though her husband and his family handled it tactfully. She often records arguments and quarrels with her husband; both of them could be cross and prickly. John Quincy Adams always prevailed, his wife invariably deferring to the patriarchal customs of their time. Louisa Catherine Adams also suffered from frequent ill health, including recurring bouts of erysipelas and depression.

Both of these books portray their subject highly favorably and make a persuasive case on her behalf. Nevertheless it did occur to me that they also provide evidence to confirm at least one of the accusations made by her contemporary critics (naturally, her husband's opponents too). They called her an alien to American life; and indeed, her youth and young adulthood in Europe had left a mark on her, in addition to her fluency in French. She never felt entirely comfortable with the New England culture of her husband's family, and she did hold the unrestrained strivings of Washington society contemptible compared with the well-defined etiquette of European courts.

Despite such secret feelings, and her frequent frustrations, bereavements, and sicknesses, Louisa Catherine Adams rose magnificently to the challenges of high society in both Europe and America, significantly assisting her husband's diplomatic and political career. She was even a feminist in the present sense of the word. She wished that the letters of her mother-in-law, Abigail Adams, would be published "to gladden the hearts of many a timid female whose rays too feebly shine, not for want of merit but for want of confidence… . [Woman should demonstrate a] native mind clear full, and vigorous in its perceptions, as capable of solid attainment, and enlarged improvement; as that of man." LCA decided to write up her dangerous trip across Europe from St. Petersburg to Paris, made in 1815 without her husband but with a baby, just after Napoleon's tumultuous and bloody retreat from Moscow. She wanted her account to "show that many undertakings which appear very difficult and arduous to my Sex, are by no means so trying as imagination forever depicts them—And that energy and discretion, follow the necessity of exertion, to protect the fancied weakness of feminine imbecility."

When Louisa Catherine Adams died in May 1852, Congress adjourned for her funeral, an unprecedented honor paid to a First Lady. At her request, the funeral was an Episcopal service.

Daniel Walker Howe is Rhodes Professor of American History Emeritus at Oxford University and professor emeritus of history at UCLA. He won the Pulitzer Prize for his book What Hath God Wrought: The Transformation of America, 1815-1848 (Oxford Univ. Press).