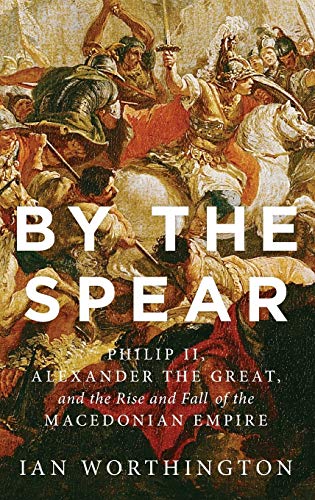 By the Spear: Philip II, Alexander the Great, and the Rise and Fall of the Macedonian Empire (Ancient Warfare and Civilization)
Ian Worthington
Oxford University Press, 2014
416 pp., 34.95

Some books provide an arsenal of disparate facts that make for sitcom fodder. I can imagine a scene in Cheers with Cliff asking Lilith and Frazier, "Did you know that in ancient Macedonia nobody could wash in warm water except a woman who had just given birth?" Or, "Few people can name Plato's successor. Yeah, it was ol' Speusippus." And, "Did you know that the 'Sacred Band' of the Thebans was an élite fighting group? Apparently, these 150 pairs of lovers fought valiantly to save their partners." And then, "All true—read it in By the Spear, a fascinating book about Alexander the Great. Guess where they got the book's title?"

Perhaps Lilith would respond, "Of course from Alexander's statement about conquering the world after crossing the Hellespont. But did you know that his father, Philip II, must have had a lot of warm water around? He took seven wives and divorced none. That's in the book, too."

And so is a steady stream of fascinating stories of brilliant military tactics interspersed with rampant post-Classical gore. From the slaughter of whole villages to unbridled violations of human dignity, By the Spear reminds us of the ugliness of war, especially when military leaders are apparently void of morality filters.

Philip was no stranger to strangers—he had terrorized enough villages and cities that his reputation proceeded him. He executed threats to his throne, including three stepbrothers. When he became irritated with opponents, his wrath could lead to mass slaughter, such as the 10,000 Illyrians and the 9,000 Phocians, including 3,000 captives, killed "on the spot." Though it's not the book's thesis, representing the human carnage in war could be. Throughout the Macedonians' rise we find this on both sides. Darius "the Great King" intercepted the trail of Macedonian sick and wounded shortly before his loss to the Macedonians at Issus. This famed Persian leader "cut off their hands, cauterized the bloody stumps with pitch, and sent some of these men to report his arrival to Alexander."

Alexander himself enslaved the small city of Tyre (pop. 30,000) after slaughtering between 6,000 and 8,000, teaching them a lesson after their long resistance was finally overcome. He also crucified 2,000 Tyrian survivors along the Syrian coast. En route to Egypt, he massacred 10,000 at Gaza and enslaved the men and children. He treated their obstinate commander, the Arab eunuch Batis, much like Hector of Troy. But instead of killing him first, he dragged him naked around the city behind a chariot, with the rope strung through his heels.

By the Spear is loaded with compelling details like this, but they aren't simply piled on helter-skelter; rather, they are embedded in Ian Worthington's coherent narrative about Macedonian ascendancy in the 4th century bc. This celebrated professor at the University of Missouri convincingly gives Philip II his due in Hellenism's spread, and masks not his thesis that Philip "has lived too long in Alexander's shadow …. From a backwater located on the periphery of the Greek world Philip fashioned Macedonia into a military and economic powerhouse in a reign of only 24 years."

Philip's "exploitation of natural resources" allowed him to establish a trade economy, aided by his land reclamation and irrigation project. Auxiliary efforts included coinage, new roads, and mining. He obviously built an intimidating professional military, replacing an "ineffectual conscript force." He added revolutionary siegecraft, 14-to 18-foot spears (sarissas), and the torsion catapult, all contributing in due course to Alexander's success in Asia—an assault built on the groundwork of Philip's successes in Asia Minor. At the same time, as Worthington emphasizes, Philip understood that military might was most effective when combined with shrewd diplomacy—a lesson his son failed to learn. Though brilliant, Alexander should always be measured against his father, "one of the ancient world's greatest leaders." And by the book's end, it's clear that such a tribute is a stretch for the son, one of the world's greatest generals, to be sure, but that was not sufficient to make him a great ruler.

By the Spear reflects Worthington's expansive knowledge not only of Philip's achievements but also of the regional context of rivalries and cultural expectations. One of Worthington's previous books, Demosthenes of Athens and the Fall of Classical Greece (2012), accents the strong personality of this relentless orator, a key antagonist here as well. A near-exact contemporary with Philip II, Demosthenes devoted considerable energies to warning the Athenians against the northern threat. Yale University Press published Worthington's Philip II of Macedonia in 2008, and six years before that, Longman released his trade book on Alexander's claims of divinity (Alexander the Great: Man and God). Worthington has also edited Alexander the Great: A Reader, the second edition of which was published by Routledge in 2011. The cumulative scholarship of these earlier works informs By the Spear, which includes—in addition to the main narrative—a very helpful eight-page "Cast of Principal Characters," a five-page timeline, and nearly 50 pages of careful endnotes.

Worthington's meticulous accounts of cunning strategies, shifting alliances, and brutal violence, all driven by ruthless ambition, make a bitter mockery of the "brotherhood of mankind" message of Oliver Stone's Alexander. The mass marriage at Susa between 91 senior Macedonians (and Alexander) and royal women of Persia displaced at Issus nearly a decade earlier wasn't for the "unity of mankind." Against the backdrop of theses trying to prove the Macedonians' multicultural sensitivities, Worthington brusquely and persuasively concludes that "nothing could be further from the truth." There really was no Alexandrian romance.

I set the book aside but couldn't shake the images of the multitude of maimed resisters to Macedonian aggression. Of the throng of Macedonian military families' washed away in a flash flood during a senseless desert hike. Of massacres so numerous that they blur together in one vast scene of slaughter.

The irony is that Alexander rather than Philip became the legend. It's easy to envision Cliff at the Cheers bar asking, "Did you know that Alexander wasn't called 'the Great' until the 1st century BC? Yep, those Romans used it in one of their comedies." And Lilith could plausibly retort, "Well, did you know that the Romans only celebrated military leaders with 'Triumphs' if they had killed at least 5,000 of the enemy? No wonder they were the first to call him 'Great.'"