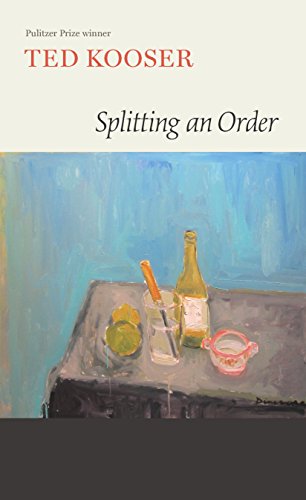 It Is What It Is

The poetry of Ted Kooser: plainspoken, not plain.
March/April 2015

How could I not click on that headline in my Facebook feed? Upon pressing the play arrow, I was delighted with six seconds of prickly pudge waddling over keys in a minor progression. I clicked several more times and even shared the link to my wall, still spending less than 40 seconds of my day.

I'm a poet and woman of faith, I tell myself. I don't succumb to the shiny objects of digital distraction. I can meditate on God's graces and the smallest details of ordinary, headline-free life.

In reality, I rarely do. I don't notice old men cutting sandwiches, women browsing greeting cards, and rusty coffee cans at estate sales. But in his collection Splitting an Order, Ted Kooser makes these mundanities worthy opponents to today's flashy interruptions. No, he makes them victors.

Kooser, author of several poetry collections (including the Pulitzer Prize-winning Delights & Shadows), nonfiction works, and children's books, was US Poet Laureate from 2004 to 2006. Well known as a "people's poet," he continues to advocate for the art through his weekly column, American Life in Poetry. Although appreciated for its plainspoken language, Kooser's work should never be mistaken as plain. His is a fierce imagination that envisions planetary topographies in a shabby baseball and describes a spinach seed as "a tiny brown leather valise / packed with green scarves." Splitting an Order, like the celebrated Delights & Shadows, reveals the truths found in moments and objects—a single spinach seed—that routinely escape our vision. But with almost a decade between volumes, the more recent book resonates with the melancholy wisdom found in older age.

Like a hedgehog on a keyboard, life passes in a moment, that moment rich with unfathomable echoes and chords. The approach of death only intensifies the insistence of life, and Kooser, 75, writes on the edge of that paradox. In "A Backyard Fish Pool," a boy pulls apart the "coverlet" of leaves from the surface of a pond and "peer[s] down / into a black like none other, / cold and solemn as the past, / a lens atop the other autumns / that had come and gone." The silent, "layered years" hold all the secrets seemingly done in and done for, until the boy, now the "I," agitates them with a stick: they become "a swirling cloud / that surfaced with a mortal smell." Our pasts lie dormant yet very much alive beneath the surface, the old pulse quickening with merely a gentle stir. But Kooser rarely slips into the sentimentality of memory, reminding us of the "mortal smell" preserved in every layered year.

And Kooser keeps on stirring. Dead bats come to life. Old homes become crime scenes. Dreams swim away like minnows. And a father, six or seven decades ago, opens a window whose breeze never stops sweeping the smell of honeysuckle over the bed.

Probably my favorite poem in the book, "110th Birthday" brings the life/death collision to a poignant head. The occasion of celebrating 110 years is not as mundane an event as Kooser's typical subjects, but he still treats it with the dignity he lavishes on everyday life—that is, the eye for precision. The celebrant, Helen Setter, rides to her party in a wheelchair, her hair "white and light as milkweed down," her eyelids "thin as old lace curtains," and her feet in "fuschia bedroom slippers." He invites us to be fully present with this woman who—let's face it—many of us have forgotten is a woman. She is an artifact, a record, a symbol of death's teetering presence. We want to celebrate her, hoping for that kind of longevity for ourselves, but we also want to look away. Then, in a moment of "secret pleasure," "she bunches her toes / the way a girl would, barefoot in sand / along the Niobrara, just a century ago." For a moment, the irony of those last four words make us smile—until we glance at our baby's brand-new Christmas picture, taken 12 years ago, and realize that "just" is pretty spot on.

Kooser is at his best when he allows his poems to breathe and resound with their sensory details. Occasionally a poem reads as if the speaker were puppeteering a meaning from it, such as "Swinging from Parents," which ends with the vague image of a child "swinging her feet out over the world," or "Potatoes," which closes with "I was / never sure of the world." And perhaps because these lines demand us to abstract in such a way, to somehow take hold of the whole world, they lose their power. It is Kooser's precision that makes his subjects so universal. I can't feel the world under my feet, but I can surely bunch my toes in the sand.

It may be trite these days to say that poetry forces us to slow down and carpe our diem. But I can't help it: spending time with Kooser's book these past weeks has helped me take notice. Sure, I'm still clicking on many of those hedgehogian temptations, but I'm also letting my eyes wander out the window to wonder on the crumbling styrofoam rose cones, the neighbor's ladder buried in leaves. And, I'm sure, if Kooser were to write a poem about a hedgehog, the animal wouldn't have to run across the piano to capture my attention. He could just sit there and snuffle the grass. Be himself. Live.

Tania Runyan is the author of the poetry collections Second Sky, A Thousand Vessels, Simple Weight, and Delicious Air, which was awarded Book of the Year by the Conference on Christianity and Literature in 2007. Her book How to Read a Poem, an instructional guide based on Billy Collins' "Introduction to Poetry," was published in 2014.