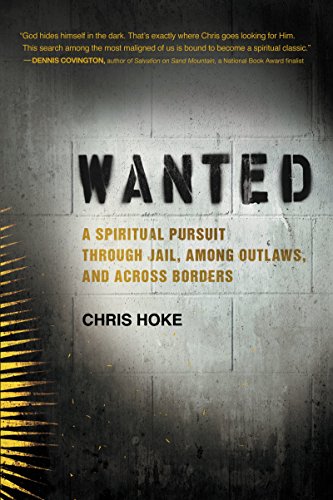 Wanted: A Spiritual Pursuit Through Jail, Among Outlaws, and Across Borders
Chris Hoke
HarperOne, 2015
384 pp., 25.99

Nothing in my life makes sense, outside of God.
—Father Gregory Boyle

You've got to be able to imagine lives that are different from your own.
—Wendell Berry

What happens when you give a prison chaplain an MFA and the freedom to write whatever he wants? You get soaring descriptions of topography and weather: rain-soaked fields and flights of white herons. You get a curious, cautious eye describing migrant worker camps in the Pacific Northwest, high-speed police chases with young Latinos, a gentle reflection on what it means to bless a locked-up man with your own two hands, to watch the Spirit work in ways mysterious and joyful and heartbreaking. You get a book which is not bound by the usual constraints—neither a simplistic "message" nor a collection of motivational stories. Instead, you get a collection of essays in the original sense of the word—wandering, surprising, multiple attempts to translate the story of a young man who found a God he could love and follow in the most unexpected of places.

The radical vulnerability and honesty that is a hallmark of so many people at the margins of society is Wanted's greatest gift to the reader.

The book in question, Chris Hoke's Wanted, was something of a revelation for me. I am a girl raised on missionary biographies, Foxe's Book of Martyrs, and strategic missional journals, an avid attender of both Bible colleges and mission conferences. I am also drawn to searing, emotionally honest narratives on the fringes of culture—addiction memoirs, journalistic tomes written on poverty and racism in America, essays mining the depths of contradictions and personal vanities and vulnerabilities. But in all of my reading, it is extremely rare that my two worlds would collide. Christian writing is often divided up into academic, memoir, or "Christian living"—a euphemism for selling the promise of a certain kind of life—and without fail in all three genres the author must be perceived as spiritually successful. There is little surprise left for the reader; we have come to expect what we shall learn from our spiritual guides.

This is where Wanted surprises, and shines. While subverted, the narratives that Hoke weaves back and forth are all a part of his own spiritual autobiography—searching for God in more traditional settings such as church and college and even organic farms—and finding him instead inside jail cells, opposite tatted Latino gangsters. As Hoke tells story after story—of hanging out in the seasonal migrant camps, of traveling with undocumented workers, of Bible studies with groups of incarcerated men, of zipping through a Latin American slum on a dangerous motorcycle—he surprises the reader with his emotional honesty and his unswerving commitment to peeling back layers of the narrative. A deeply poignant and beautiful metaphor he spins out in regard to an inmate's attempted suicide takes a hard left turn, leaving me speechless with both sorrow and a glimmer of understanding. Harsh, compelling statistics about the current rates of incarceration are embedded in a non-traditional redemption narrative. A story detailing violence in Venezuela is juxtaposed with stories of the Holy Spirit falling in visible manifestations, and then finished with a charged look at spiritual disappointment. Each essay ends in a place where you don't expect it.

Based on all of those missionary biographies I consumed, I suspect there are many other Christians in the world hungry for news that is good—eager to know that God is at work and moving in our world, and that he uses damaged people to accomplish his work. We want to know that evil can be overcome, that people can rise out of and above their situations, that repentance and forgiveness are real. We want to know for certain if this is all true.

God is the one who is wanted, after all, in all of our hearts. In a chapter all about praying with schizophrenics, Hoke tells the story of when he found the God he wanted to follow. As a coterie of nice middle-class white people meet in a conference room downstairs to talk about "listening prayer," Hoke is huddled in his upstairs bedroom with a young man who climbed in through his window, growing increasingly agitated and restless as he detoxes from meth. Chris gently suggests the young man pray and ask God any question—and then wait for the answer. The end result is that the young man hears a beautiful word from God that could never have come from his own broken sense of self, and he is able to curl up and sleep on the floor in peace. As Hoke writes, "that night, on the floor of my room with a suicidal schizophrenic, I fell in love with whatever voice said that to my self-hating friend." Earlier, Hoke describes how he had to turn to the mystics in order to accurately describe how he felt when in contact with the prisoners, seeking God together. "I felt like I was falling in love … I wasn't sure if I was falling in love with all of those broken lives at the table with me or the One through whose eyes I was possibly learning to see." For those of us who have seen and felt the glimmers of this amazing, great, good God, one who is constantly speaking life and light to those who are the closest to the graves of despair and shame, Wanted remains an important reminder to continue to seek out this voice—and a reminder that oftentimes, we might have to re-arrange our lives in order to do so.

While most Christian readers are comfortable with redemption narratives, even from surprising places, perhaps we don't want to look too closely at the unbelievably messy trajectory of resurrection—how it moves and works in fits and starts. Perhaps, as Shane Claiborne says, it is because "when people begin moving beyond charity and toward justice and solidarity with the poor and oppressed, as Jesus did, they get in trouble. Once we are actually friends with the folks in struggle, we start to ask why people are poor, which is never as popular as giving to charity."

Hoke's personal journey takes him from being the son of a loving Christian family to the wilds of depression and listlessness in college to finding himself under the tutelage of Bob Ekblad, a longtime prison chaplain and author of Reading the Bible with the Damned. Bob and his wife, Gracie, moved to the Skagit valley in Eastern Washington after years of working with people in Honduras; there, they started a ministry working with the migrants scattered throughout the lush Washington valley. Chris starts visiting the prisons with Bob, learning, as he says, "how to open my heart both to the intimidating and angry men and to ancient supernatural phenomena." Where Ekblad offers in his own book a more scholarly, step-by-step approach to the mechanics of what it means to minister among those whom the world has locked up, Hoke takes the same themes with the eye and ear of an artist. Both are eager to share with their mostly Western-educated readership the joys of reading the Scriptures with those whom they were primarily written by and for—the oppressed of the world. They are also quick to point out the failings of our moralistic interpretations, and how they weigh the heaviest on those at the bottom of the totem pole.

As Hoke meets and prays and studies with the men, both in and out of jail, he scribbles their insights and answers in a notebook. The men notice, and ask him if he is planning on writing a book. A bit sheepish, he admits he has toyed with the idea. They get excited about the idea, chastening him "not to make them sound too white" and scoff at the idea of changing names. They know what the world thinks of them—throwaways, criminals, out of sight, out of mind—and they are beginning to understand what it means when God is on your side, when he thinks the absolute world of you. They recognize in Hoke a desire for true beauty, a world ordered the way it should be, with the last being first, and they are exuberant for these stories to be shared—failures, tragedy, and all. It is this, the radical vulnerability and honesty that is a hallmark of so many people at the margins of society, which is Wanted's greatest gift to the reader. We are invited into the same space that Hoke was—into a space of relationship. A table, as it were, far outside the camps where we've always believed that God resided.

We think of the world of MFAs—"the literary scene"—as completely distinct from the world this book takes us into, with "theology" yet another world of its own. But Chris Hoke shows us that it isn't necessarily so. A voracious reader, a student of words that are pleasing to the tongue and convey moving images in the mind's eye, he draws on Wendell Berry to describe patterns in gang relations and sees similarities between how David James Duncan writes about endangered salmon and his own work with marginalized young men. (Not to be missed: at one point in the book Chris and two of his friends from prison enroll in Duncan's famous fly-fishing class, and the results are both moving and unexpected). I hope many pastors, chaplains, missionaries, and practitioners of all sorts will follow Hoke's example.

D. L. Mayfield lives and writes in the Midwest, where she currently is a part of a Christian order among the poor. Mayfield's writing has appeared in McSweeney's, Image, Christianity Today, and The Other Journal, among others. She has a book of essays forthcoming from HarperOne in 2016.