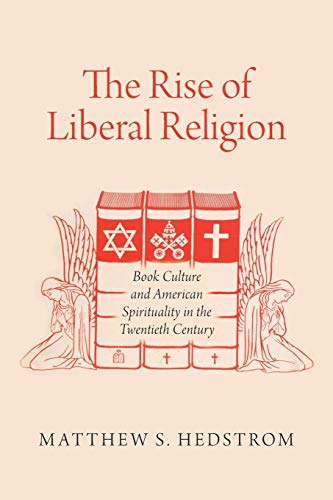 Pastors have long admonished their flocks that faith isn't just for Sunday, and many a sermon has played on the theme, "Show me a man's checkbook, and I'll tell you what he truly values." It is an insight that has taken scholars of American religion awhile to recognize, but thankfully some are now examining everyday behaviors and purchasing patterns to better understand trends in spirituality.

Matthew Hedstrom, assistant professor of history and American studies at the University of Virginia, contributes to this vein of scholarship with his lively first book, The Rise of Liberal Religion: Book Culture and American Spirituality in the Twentieth Century. Though he attends to liberal Protestantism, he does not trace his narrative through theological debates, denominations, or institutions such as the Federal Council of Churches. Instead, he looks at book cultures, specifically the practices of producing and consuming the middlebrow religious bestsellers that still line the shelves of thrift stores and older church libraries, including books that enjoyed wide dissemination thanks to the paperback revolution. "In material ways that go beyond adherence to broad cultural norms," he argues, "participation in religious and spiritual life happens through commodities bought and sold, and for much of the twentieth century the most significant of these religious commodities was the book."

The selling of books looms larger in this tale than does the buying of them. Hedstrom excavates the massive marketing and distribution campaigns that launched these books into public consciousness, starting with Religious Book Week in the 1920s. Spearheaded by Frederic Melcher, the man who had instituted the Newbery and Caldecott Medals to promote quality children's fare, Religious Book Week aimed to bring the best in spiritual literature to a population hungry for uplift following the disillusionment of World War I. The promotion also, of course, aimed to raise income for the publishers who helped select the titles. And, indeed, the 1920s were a robust decade for religious books. In 1900, Hedstrom reports, religious books ranked sixth among the various types of books sold, but by 1928 they had risen to second, behind only fiction.

Religious Book Week and its successor programs provide Hedstrom a creative new lens through which to study liberal religion. Booksellers' shifting notions of the "best" in spiritual reading show the emphases of liberal religion that influenced American culture in the first half of the 20th century. Book selections in the 1920s advanced anti-sectarianism, optimism, and popularizations of academic research—all hallmarks of liberalism. The books Hedstrom highlights paid special attention to psychology and mysticism. Later, as Americans became aware of atrocities perpetrated by the Nazis against Jews, liberals' anti-sectarian impulse segued into the newly invented "Judeo-Christian tradition." During and immediately after World War II, owing in part to the extensive psychological testing performed on soldiers and therapy offered to them after their service, psychology emerged as the primary idiom for liberal religion.

Once these ideas gained ascendance in American culture, according to Hedstrom, liberal religious institutions that were temporarily buoyed by postwar suburbanization reverted to the decline that had begun in the 1930s. Here, he builds on the work of Christian Smith, David Hollinger, and other scholars who conclude that liberal Protestants won the culture at the same time—and for much the same reasons—as the appeal of their churches began to wane. Liberal ideals, like floodwaters, overflowed their banks, and the people followed them right on out.

Though it celebrates free spirits, Hedstrom's story takes place within the closed, sometimes claustrophobic world of liberal, mostly Protestant culture-makers. The tight focus he keeps on these men and their books them serves to highlight the élite roots of mass-market, middlebrow culture. Hedstrom helpfully profiles each man—and they are practically all men—behind his chosen bestsellers, but the details of their lives start to blur together: educated, cosmopolitan, East Coast, religious seekers. Perhaps the archetypal figure is Harry Emerson Fosdick, whose many books were regularly selected by the many expert committees on which he also served.

This insularity complicates the already complex connection Hedstrom draws between liberal bestsellers and the American religious temper. He suggests that the bestsellers succeeded because they responded to widely felt spiritual needs, but often his sources hint at a different interpretation. Insofar as featured books appealed to the taste-makers themselves and met what they believed to be, or believed ought to be, the needs of the public, booksellers seemed to be simultaneously creating and satisfying the demand for these particular forms of liberal spirituality.

The case of Eugene Exman and Emmet Fox illustrates this phenomenon. Exman, a University of Chicago Divinity School graduate and parishioner at Fosdick's Riverside Church, ran the religion department at Harper & Brothers from 1928 to 1965. In that span, he also ventured beyond Protestantism to explore Vedantism, other Eastern mysticisms, and LSD. Hedstrom asserts that Exman's life story "closely tracked that of liberal Protestantism, and much of American spirituality, in this same period" while acknowledging that Exman's experiences put him in a line of "elite spiritual adventurers" that included Ralph Waldo Emerson and William James.

Fox, a New Thought leader who drew large crowds to his Divine Science church in New York, became Exman's bestselling author of the 1930s. His book Power Through Constructive Thinking went through multiple printings and sold hundreds of thousands of copies, a feat Hedstrom ascribes to Fox's ability to understand the anxieties resulting from economic and religious Depression. Yet Hedstrom also notes that, despite the Religious Book Club's refusal to endorse this "wildly eclectic mix of New Thought, transcendentalism, Christianity, Hinduism, and a variety of other metaphysical teachings," Exman lavished publicity on Fox's work and made sure Power Through Constructive Thinking was featured in bookstores and department stores across the country.

To what, then, do Fox's sales attest: a pervasive hunger for eclectic spirituality in the '30s or the reach of Exman's marketing machine? It is difficult to say, at least without extensive research into who read Fox's books, what they gleaned from them, and what else they read or listened to around the same time.

The inclusion of reader testimonials and contemporary reviews bolsters Hedstrom's strong final chapter, on religious reading after World War II. The chapter explores the content and reception of Peace of Mind, by Rabbi Joshua Loth Liebman; On Being a Real Person, by Fosdick; and The Seven Storey Mountain, by Thomas Merton. These three late-1940s hits illustrate the willingness of postwar readers to cross confessional lines—a realization of the interfaith ideal—and document a common search for wholeness through psychology (Liebman and Fosdick) or mysticism (Merton).

Future scholars could set Hedstrom's astute analysis of these books and their readers beside examination of other, less obviously liberal bestsellers from the period. The same year Peace of Mind topped the nonfiction bestseller list, the exuberantly Catholic novel The Miracle of the Bells topped the fiction list, followed the next year by The Big Fisherman, a rendering of the life of Peter by the author of The Robe. The Seven Storey Mountain appeared on the 1949 nonfiction list a few spots above Fulton Oursler's The Greatest Story Ever Told, Bishop Fulton Sheen's Peace of Soul, and Norman Vincent Peale's A Guide to Confident Living.

Peale fits easily into Hedstrom's liberal trajectory, but the other authors do not. The list of 1950s nonfiction religious bestsellers would appear to drift even farther from liberalism, with authors including Peter and Catherine Marshall, Cardinal Francis Spellman, Billy Graham, and Pat Boone. These books could be evidence of conservative pushback against ascendant liberalism or of a broadening middlebrow culture.

Hedstrom's work is a welcome contribution to a new generation of scholarship on liberal religion in America. By shifting the focus away from theological tomes or denominational ledgers and toward popular nonfiction, Hedstrom shows how much of 20th-century spirituality was created as people encountered new ideas, new voices, and new possible selves in books.

Elesha Coffman, assistant professor of church history at the University of Dubuque Theological Seminary, is author of The Christian Century and the Rise of the Protestant Mainline (Oxford Univ. Press).