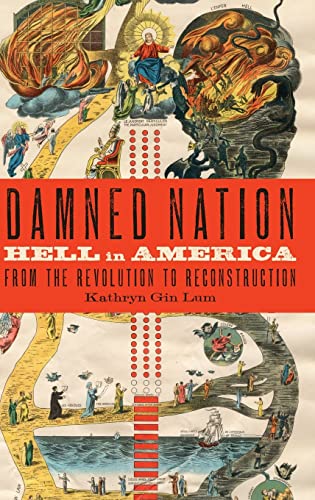 One Sunday in the late 1990s, my wife and I drove into the countryside beyond Louisville, Kentucky, to attend a Reformed Baptist church. The preacher sharply criticized President Bill Clinton, both for his moral lapses and for being a "card-carrying member of the ACLU." Eventually, the preacher sensed a word of caution was in order. Clinton, he clarified with helpful nuance, was "not the Antichrist" himself, but only "a pawn of the Evil One." I found the discussion an amusing change from the typical politics of our Presbyterian congregation. We left in haste, however, when the minister later prayed that a congregant would discern which of her sins had caused a recent miscarriage.

Saving sinners from hell and keeping the United States on the right side of a future Armageddon have long been twin goals for American evangelicals. Nowadays, however, one hears nary a word about hell and far fewer apocalyptic references in most evangelical settings. Mainline Protestants, who consider the word "hell" nearly as uncouth as the phrase "born again," often make an obligatory reference to the Second Coming on the first Sunday of Advent but eschew any discussion of seals, trumpets, and apocalyptic armies. Not all American Christians, however, gave up on hell or the Antichrist.

Two recent books make sense of these theological trends. Kathryn Gin Lum's Damned Nation explains that vibrant and colorful debates about hell in the decades following the American Revolution faded into sentimental visions of familial heavens in the wake of the Civil War's carnage. She begins with the humorous juxtaposition of two John Murrays, a Universalist minister known as "Salvation Murray" and a Calvinist Presbyterian dubbed "Damnation Murray." Questions of hell were no laughing matter to either Murray, nor to the many evangelical Americans in particular who worried about the eternal destinations of themselves and their loved ones. Already, though, Americans were abandoning more severe forms of Calvinism in droves. Even before the Revolution, Joseph Bellamy, a theological disciple of Jonathan Edwards, had speculated (with curious precision) that "above 17,000 would be saved, to one lost" by the end of Jesus Christ's millennial reign. Edwards himself had never been quite so sanguine, but his descendants, not to mention Christians of other theological traditions, found it increasingly difficult to reconcile a populous hell with their sense of God's fairness and goodness.

Still, even Deists like Benjamin Franklin believed that only a fear of postmortal punishment could uphold mortal morality. As Gin Lum suggests, hell was a very useful concept, not least as a ballast for republican virtue. "If evangelicals had dropped hell from their worldviews," she writes, "revivals would not have had life-or-death intensity, missions movements would likely not have taken off, and social reform crusades may not have seemed as immediately pressing." Americans needed hell.

As Victorian sentimentality took hold, though, Americans found it harder to imagine that God would consign the ones they loved to eternal damnation. Families were told to make their homes a foretaste of heaven, which became a continuation and expansion of the greatest of earthly joys. Distant heathens might suffer in the afterlife, a concern that encouraged the burgeoning American missionary enterprise, but one's own parents, spouse, and children—surely God would spare them. That is not to say that all Christians took their eternal fate for granted. Indeed, during the early years of the Civil War, chaplains worked hard to bring about death-bed conversions. The sheer number of deaths effected a change in attitudes. By the end of the war, many ministers and chaplains on both sides of the conflict presumed that wartime patriotism alone made the fallen into martyrs, ensured of eternal bliss as a compensation for their passage through hell on earth.

As Gin Lum illustrates from recent surveys, solid majorities of Americans still express belief in hell. In fact, as one could deduce from Matthew Sutton's American Apocalypse, many evangelicals well into the 20th century spoke about eternal punishment as emphatically as "Damnation" Murray once had. While Gin Lim traces broad trends that include not only evangelicals but Universalists, Spiritualists, Adventist annihilationists, and Mormons (Catholics make only a brief appearance in her narrative), Sutton focuses on groups he labels "radical evangelicals," namely Wesleyan (including Pentecostals) and Reformed Protestants known as "fundamentalists" in the early 20th century and "evangelicals" after the mid-1950s. Sutton argues that premillennialism was the theological glue that held these otherwise theologically diverse conservatives together.

Much of Sutton's story is not new. Ernest Sandeen also argued for the centrality of premillennialism to fundamentalism, and Paul Boyer traced many of the same prophetic twists and turns in the ways that evangelicals responded to current events. Nevertheless, Sutton stitches together prophecy and politics in a compelling and original manner, adding a rich layer of original research to many chapters. Very few scholars, I imagine, have read so many of the alternately admiring and disparaging letters received by fundamentalist firebrands like J. Frank Norris and John Roach Straton. The result is a rich, amusing, and often sobering glimpse into the sometimes dark passions of American premillennialism.

Sutton convincingly shows that the alleged post-World War II awakening of evangelical politics was nothing new. Post-WWII evangelicals ignored their own history when they too eagerly claimed "that earlier generations had been indifferent to politics." Rather than simply waiting for Christ's return, fundamentalists were always busy with the task of "occupying" until that moment, and that work of occupying involved serious efforts to direct the course of the nation. Indeed, fundamentalists had organized themselves to defeat liquor, evolution, and Catholicism, and fundamentalist leaders across the country were among the most consistent and bitter opponents of Franklin Roosevelt and the New Deal. Premillennialism, moreover, encouraged a "profound sense of besiegement" and "suspicion." Sutton details fundamentalist anti-Semitism, anti-Catholicism, and race-baiting. In 1928, for example, the Fort Worth-based Norris offered to provide the Republican Party with "the addresses of fifty thousand Klansmen" to help defeat Catholic Democratic presidential nominee Al Smith.

Fundamentalists saw their political wishes fulfilled in 1928 and on other rare occasions, but, as Sutton drily observes, they "had a knack for picking losing battles." And a knack for false predictions. Premillennialists largely avoided setting specific dates for the Second Coming, but they lurched from one political crisis to the next, discarding old and apparently incorrect associations of foreign powers and leaders with biblical prophecies. Occasionally, they hurt themselves by their excesses, as when Jerry Falwell and Pat Robertson blamed the 9/11 attacks on American gays and lesbians. For the most part, however, radical evangelicals benefited from short memories. "If the return of Christ was not around the next corner," Sutton writes, "it was always behind the corner after that." In later printings of The Late, Great Planet Earth (1970), Hal Lindsey did not even bother to revise his speculation that "all these things could take place" by 1988.

Being repeatedly wrong apparently did not matter very much, and it is easy to understand why. From the carnage of World War I, to Cold War fears of nuclear annihilation, to the repeated crises in the Middle East, "[a]pocalypticism has provided millions of Americans with a powerful lens through which to make sense of difficult and challenging eras." Especially to Americans who felt alienated from mainstream politics, premillennialism seemed more convincing than liberal dogmas of human goodness and progress.

A 2006 Pew survey of American Christians documented that 79 percent believed in the Second Coming; one-fifth expected Jesus to return in their lifetimes. An eye-raising 41 percent of all Americans anticipated that Jesus would return by 2050. And yet, as Sutton notes, premillennialism seems to exert less sway over evangelicals than in prior decades. Unlike Billy Graham and Harold J. Ockenga, Rick Warren and Joel Osteen "do not spend time exploring doomsday scenarios."

Together, these books raise difficult questions for contemporary American Christians. Both document a yawning racial divide among theologically conservative Protestants. Most notably, perhaps, white evangelicals (alongside many other Protestants stretching back to the earliest periods of white settlement) have seen America as God's divinely chosen instrument, a "New Israel." African American Protestants, by contrast, have more frequently entertained the idea that the United States is a "damned nation," the object of God's wrath because of the sins of slavery and segregation. For white and black Christians, at times, the United States teetered on the seesaw of divine grace or judgment, with the possibility of national redemption if Americans repented from certain sins. Does God judge nations as well as individuals? Most white and black evangelicals have said yes but have disagreed about exactly which national actions most merited divine judgment. In light of the persistent opposition on the part of white fundamentalists and evangelicals to serious movements for racial justice, it is hardly surprising that theologically like-minded African Americans look on their white counterparts with deep-rooted suspicion.

Second, how is it that most American Christians believe in hell and the Second Coming (with its associated judgments) but rarely discuss them? Hell is still important for evangelicals, but more as a theological boundary than as a source of spiritual trembling or missionary activity. And while a subset of evangelicals take these doctrines seriously, most American Christians—evangelicals and otherwise—do not. Given the rather comical prophetic errors Sutton recounts, this may well be a positive development. After all, it is probably best if American preachers eschew from identifying presidents as even pawns of the Antichrist. Still, the disconnect between formal belief and pulpit/stage/screen silence suggests the need for many evangelicals to revisit these doctrines. Most Americans believe that some human beings go to hell after death, and most believe that Jesus is coming soon. It is, in fact, hard to read the New Testament and not encounter such ideas. Pastors, teachers, and writers should not, through their silence, miss the opportunity to educate their audiences about these doctrines and invest them with new meaning.