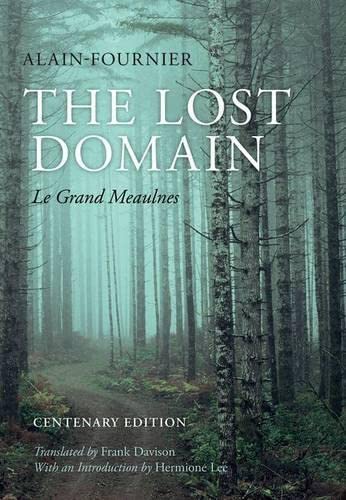 The Elusive Magic of Alain-Fournier

On September 22, 1914, the French writer Henri Alban Fournier, who went by the demi-pseudonyme Alain-Fournier, was reported missing in action near Verdun. He had published, barely a year before, a successful first novel, Le Grand Meaulnes. In 1959, translator Frank Davison chose to present Le Grand Meaulnes as The Lost Domain, a version Oxford has reissued in a centenary edition to commemorate the novel's publication and to mark the death of yet another promising writer lost to the Great War.

He appeared at our house on a Sunday in November 189…

I still say 'our' house though it is ours no longer; nearly fifteen years have passed since we left the neighbourhood, and we shall not be going back to it.

The narrator is François Seurel, a solitary 15-year-old who lives in a village schoolhouse. His father teaches the older boys, while his mother has the children in the "lower form." Born with a bad knee, François is quite content to spend his free time reading novels, until the day "he" appears. This mysterious visitor is just a country boarder, the 17-year-old Augustin Meaulnes, come to finish off his schooling.

Upon arrival, Augustin takes the liberty of rummaging about the attic. He finds some fireworks left over from Bastille Day celebrations and invites François to help set them off in the courtyard, with no regard for parental oversight:

Coming out of doors with Madame Meaulnes—terms of pension having been discussed and agreed upon—my mother saw two great bouquets of red and white stars soar up from the ground with a hiss. And for the space of a second she could see me stand in a magical glow, holding the tall newcomer by the hand, and not flinching.

From that point, François' life is changed, as Augustin introduces a rebellious spirit to the setting of his new friend's happy but rather dull childhood.

This passage summarizes what makes the novel so engaging and yet at times too predictable. A simple happening—the arrival of a rough and ready boarder at an isolated village school—takes on the proportions of a climactic, world-changing event. While Alain-Fournier marvelously transforms the everyday into something greater, he also has the tendency of overplaying his hand by pointing out an event's "magical glow" and the related "no going back" to the marvels of childhood past.

In the first part of the novel, Augustin quickly becomes the school's leader until he has a life-changing experience of his own. He gets lost in the countryside and stumbles upon a "strange fête," a splendid wedding party held at a country manor. Augustin dons a silk waistcoat, joins in on the feasting and even gambols hither and thither. He then stumbles upon the ravishing quietness of the "young lady of the house." They cross paths, they chat, and he says: "You are beautiful." She runs off but finally gives her name, Mademoiselle Yvonne de Galais. In this manor house and through this young woman, Augustin finds for a brief moment complete happiness, a physical and emotional "lost domain" that he tries to recover right until the novel's end.

In her able introduction to this edition, Hermione Lee offers an elegant spoiler alert: "Readers who do not wish to learn details of the plot will prefer to read the Introduction after the novel." And readers should prefer to finish the story on their own, for one of the novel's great delights is the uncovering of Augustin's adventure. Allow me to stress, however, that for Alain-Fournier the magical comes from an unexpected perspective, from experiencing things slant. At the same time, the novel's poetic quality also derives from its mix of genres, where a schoolyard adventure turns into a full-blown romantic quest with, admittedly, a number of unbelievable plot twists and plodding sections along the way.

Successful at its publication, the novel gained greater notoriety with Alain-Fournier's untimely death. Adding to the cultlike appeal of the book was a fascination with the links between Le Grand Meaulnes and the author's biography. Born in 1886, Alain-Fournier grew up as the son of two schoolteachers in La Chapelle-Anglillon, a village near the Cher river some 130 miles due south of Paris. When he was five, his parents took up another teaching position in nearby Epineuil-le-Fleuriel. The family lived and worked there in a two-classroom schoolhouse. Later, as a young student in Paris, Alain-Fournier saw outside the Grand Palais a beautiful young woman. He followed her and told her, "You are beautiful." She gave her name, Yvonne de Quiévrecourt, and left without a trace. While he made a name for himself as a literary journalist, Alain-Fournier would pine over Yvonne for the next eight years—and channel his unrequited love and childhood memories into Le Grand Meaulnes.

Such biographical details suggest that François Seurel, the narrator, and Augustin Meaulnes, the adventurer, express different aspects of Alain-Fournier's at once bookish and extravagant character. Contemporary critics will probably wish to examine in greater detail the "bromance" between François and (le grand) Meaulnes, which is often cited as an inspiration for Fitzgerald's narrative pairing of Nick Caraway and (the great) Gatsby. And if you are looking for an excuse to visit France, Le Grand Meaulnes offers an itinerary for a pleasant literary pilgrimage to the French countryside.

It is difficult, however, to place the novel in the literary landscape of the past hundred years. Le Grand Meaulnes was published within months of Proust's Du Côté de chez Swann (Swann's Way), the first volume of the French novel to end all novels, A la recherche du temps perdu (In Search of Lost Time). As Hermione Lee summarizes, Alain-Fournier's novel can be viewed either in the context of the modernist movement or as the last vestige of "a lost domain, the domain of nostalgic rural writing, romantic yearning, and childlike purity." Perhaps there is an easier answer to this question: the book appeared at a literary crossroad, where a 19th-century romantic quest and a 20th-century reflection on lost love could meet.

While in France recently, I asked two Parisian friends, both retired high school teachers, what they thought of Le Grand Meaulnes. They brushed aside my question with a shrug, a wave of the hand, and a dismissive assessment: "old-fashioned" and "something my father would have called a good book." Then one friend reconsidered, promising to read it again this year.

Such is the value of a centenary edition or any commemoration of a classic. A new generation has the chance to discover a book, and older generations are asked to reassess their opinion. It's a shame the publisher did not commission a new translation of the Le Grand Meaulnes. Davison's translation is good, if you are content with a readable 1950s British version of a French novel. That considerable quibble aside, Alain-Fournier's Lost Domain is well worth visiting or revisiting.