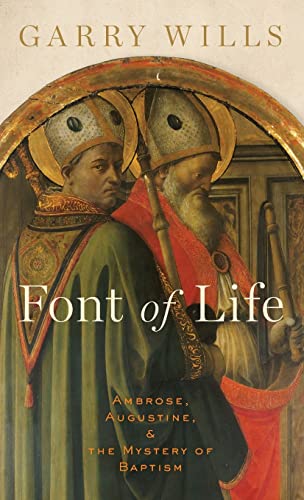 Ambrose, Augustine, and the "lived experience" of 4th-century baptism.
July/August 2015

Early on the morning of Easter 387, just after dawn, the man whom history would come to know as "Augustine of Hippo" was baptized, along with a small group of fellow catechumens, in the large, octagonal baptistery behind Milan's imposing Basilica Nova. The baptism itself, as well as the extensive instruction preceding and following it, was performed by another memorable historical figure: the tenacious and formidable bishop "Ambrose of Milan." The relationship between these two towering figures of church history is the subject of Garry Wills' Font of Life. Curiously, the relationship he describes was not based on personal affinity or compatibility of belief. Rather, according to Wills, the story of Ambrose and Augustine was "a tangled one, full of surprises," a strange admixture of mystagogical initiation and retrospective invocation, deeply rooted in the nuances of early Christian liturgical practice and the conflicts of ecclesiastical politics. In this truly foreign context, Wills masterfully steers his historical reconstruction, artfully avoiding the twin shoals of reductive simplicity and overwhelming complexity by anchoring his narrative in the "sacred drama" of 4th-century baptism. In this, Wills does his readers a great service, bringing to life much of the ritual and symbolism surrounding the practice of late antique Christian initiation.

James J. O'Donnell has noted—at the outset of his three-volume commentary on Augustine's Confessions—the lamentable tendency of most modern readers to anachronistically undervalue the "visceral reverence for cult that all late antique men and women felt."[1] We undervalue cult, liturgy, and ritual, O'Donnell argues, both because of the prejudice of our time, which tends to purge these foreign elements from the beliefs of our spiritual forebears, and because of the paucity of remaining evidence for the specifics of these highly guarded practices. In the late 4th century, it was customary for the central liturgical act of Christian worship (the Eucharist) as well as for key pieces of Christian teaching (the Apostle's Creed, the Lord's Prayer) to be withheld from both non-Christians and catechumens, through a practice known as the disciplina arcani, the "discipline of the secret." Even Augustine, recounting his own baptismal experience in the 9th book of his Confessions, avoids describing the rite itself, preferring instead to comment on how he was moved by the singing of hymns. As there is clear attestation that much of late antique Christian teaching and practice relied heavily upon these "oral" and "performative" traditions of liturgy and sacrament, all too often veiled in silence, the church historian is faced with the dilemma of trying to reconstruct the Christianity of this period while missing key pieces of the puzzle.

With this in mind, the central achievement of Font of Life is Wills' ability to bring to life, with both verve and lucidity, the "lived experience" of 4th-century baptism, drawing evidence from a wide variety of sources (archaeological findings, mystagogical manuals, extant sermons, and personal correspondence) into a coherent whole. What results is a remarkably clear presentation of Ambrose's pre-baptismal catechesis (which typologically interpreted Old Testament patriarchs, prophets, and martyrs) and a vivid account of the rite of baptism itself, as well as a fascinating (day-by-day) description of Ambrose's post-baptismal mystagogical preaching in the week following the celebration of Easter. By explicating the most intimate elements of 4th-century Christian ritual, Wills is able to illuminate the role that ecclesial architecture, ritual, and even relics played in imperial disputes and Ambrose's consolidation of power—and in the years following his episcopal election in 374.

In setting Ambrose's liturgy and preaching within the "huge ceremoniousness of late Roman life," Wills tellingly contrasts the "sacramental minimalism" and "stripped-down ceremonies" Augustine developed in his North African context. By describing the sharp variance of style and opinion between Ambrose and Augustine, Wills convincingly advances his thesis that in 386/387, at the height of their physical and social proximity, these two men "were never farther apart," their association being largely the product of Augustine's later reassessment and appropriation of Ambrose in light of the Donatist controversy. This reconstruction of the "relationship" of Ambrose and Augustine is a remarkable success, rescuing these two great men from the long shadows they have cast over subsequent history and relocating their lives and meaning within the complexity of their original context.

Notwithstanding its overarching value, Font of Life is not without its flaws. At times Wills' energetic descriptions violate the historical contextualization he has worked so hard to cultivate. Speaking of Ambrose's depiction of the transforming role of Christianity, contra Symmachus' defense of pagan antiquity, as "a kind of religious proto-Darwinian world itching to move on" obscures far more than it clarifies. Similarly, Wills' comment on Ambrose's praise of baptismal whiteness "as an effective counterblast to Melville's later hymn to an evil white in Moby-Dick" is simply out of place.

Of greater concern is Wills' ambiguous translation of the famous phrase (from Book 8 of the Confessions) tolle lege as "lift! look!" rather than the more traditional rendering, "pick up, read." Wills' translation reflects his desire to allow for the possibility of A. Sizoo's hypothesis about the historical origins of this phrase.[2] In the late 1950s, Sizoo argued for the historical veracity of this phrase by suggesting that what Augustine heard while soul-searching in the Milanese garden was a child mindlessly repeating a harvester's work chant meaning "take up, collect."[3] While this translation is within the bounds set by the Latin words, as well as a riposte to "fictionalist" interpretations of Augustine's conversion narrative, it sidelines the possibility of subtle illusions to liturgy and polemic also inherent in this phrase, which may well be a rhetorical construction, intended to convey meaning other than what Augustine literally heard.[4]

Given Augustine's mediation on divergent meanings of the word lege (in Latin "read", in Greek "say") in On Christian Doctrine, written contemporaneously with the Confessions, it seems at the very least possible that this carefully chosen phrase employs a Latin/ Greek homophonic pun, paralleling the act of conversional reading with confessional speech.[5] Likewise, considering the presence of remarkably similar phrases found in Augustine's sermons, such as intuere, lege ("take a look, read") and aperi lege ("open, read)", it seems the phrase might be deliberately echoing a consistent liturgical or homiletic refrain to attend to the Scripture read that week.[6] As the jury is still out on the significance of this phrase, Wills' decision to translate it ambiguously without any accompanying explanation does a disservice to his readers, inconsistent with the clear intent of his book to situate the lives of Ambrose and Augustine within the contexts of ritual, liturgy, and polemic which so heavily marked 4th- and 5th-century Christianity

Still, Font of Life is an engaging read as well as a provocative contribution to the scholarship on Ambrose and Augustine. Like all good histories, it combines a thorough knowledge of period and personality with a spark of imaginative creativity. All those who seek to know more about Ambrose and Augustine or who want to delve deeper into the late antique world in which they lived and wrote would do well to take up this book. It does not disappoint.

Jonathan Reimer is a PhD candidate at the University of Cambridge, where he is writing a dissertation on the life and works of Thomas Becon (c. 1512-1567), a Tudor clergyman and bestselling devotional author.