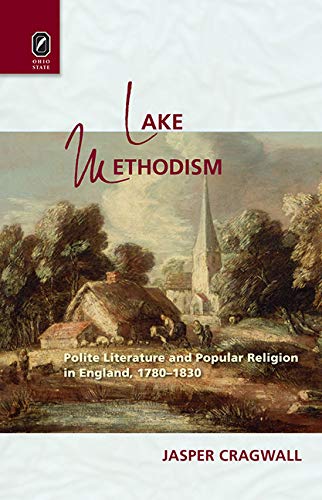 Every enthusiast," John Wesley believed, "is properly a madman."[1] The popular term of abuse took on a life of its own in the 18th century—a commonplace label for not only participants in the evangelical revival, but also for the more controversial prophets, visionaries, spiritists, and mystics who claimed religious inspiration in an age of polite, reasonable society. The Methodists were frequently labeled fanatics and madmen alike. Their emphasis on individual religious experience, appeals to laborers and commoners, and willingness to eschew ecclesial patterns in favor of new methods of evangelism and church organization all contributed to their notoriety in England. Romantic authors, similarly, clashed with the establishment. Their emphasis on poetic feeling, intuition, subjectivity, and the revitalization of the creative imagination signaled a shift in the literary landscape and rankled critics.

The association between Methodism and English Romanticism, of course, has a long history. Most of the early Romantics had some connection to the Methodists—if only an antagonistic one. Leigh Hunt wrote a six-part series of essays on the "folly" and "danger" of Methodism for the Examiner in 1808. And in 1820, Robert Southey, though showing more restraint than Hunt, published the first non-Methodist biography of John Wesley. Southey's biography countered Methodist hagiography, finding in Wesley tendencies toward mysticism and fanaticism, and portrayed many of the leaders of the movement in critical snapshots of the early life of the societies. The relationship between Romanticism and Methodism first came to critical prominence, however, with Frederick Gill's The Romantic Movement and Methodism: A Study of English Romanticism and the Evangelical Revival (1937). Gill not only discovered a shared literary repository for the Wesleys and the Romantic poets in figures such as John Milton but also described a common thematic interest in nature, grace, and rebirth. More recent scholars, including Richard Brantley and Jennifer Jesse, have continued to build on such affinities, yet the wider academy still suffers the effects of a literary hangover after years of imbibing from the cellar of the secularization thesis (consider, for example, the still pervasive influence of M. H. Abrams' reflections on nature and Romantic religion).

Jasper Cragwall's Lake Methodism, a creative and energetic study, sets Romantic-era writing in the broader context of debates over English religious enthusiasm. The experiential religion of the evangelical revival inspired Romantic literature, despite public efforts to denounce the fanatical spirit of revivalism that had captured the nation's attention. Thus Cragwall's title integrates two major areas of scholarship by using the denominators "Lake" and "Methodism" in their broadest senses. The so-called Lake Poets—Wordsworth, Coleridge, and Southey—stand as representatives of the wider British Romantic movement. Yet, although their influence pervades the whole, Cragwall's study extends far beyond these individuals. What matters more is what these poets represent: the Lakers flirted "with energies that subverted the regime of polite taste governing staid churchmen and rational Dissenters alike."

Cragwall's Methodism, similarly, stands for the wider evangelical spirituality that flourished during the 18th and early 19th centuries, extending from John and Charles Wesley to the writings of numerous other popular religious authors. In Cragwall's account, English Methodism posed a double threat. The movement undermined the Church of England and drew the criticism of those who perceived a menace to the establishment. The Church of England, with its bishops, performed a critical role in the national hierarchy. Local clergyman provided visible, local representation of national interests. Methodism undermined the system. Instead of Oxbridge-trained clergy meeting in official parish churches, the Methodists endorsed itinerant lay preachers whose homilies stirred the mind and stimulated the senses. In turn, English culture was unavoidably rewritten. Evangelical hymns were suddenly the most popular verses in the land. Instead of Milton and Shakespeare, the public consumed Wesley and Watts, committing their poems to memory and reciting them with their dying breaths.

Cragwall correctly identifies the electric fascination that Methodist field preaching undoubtedly carried in its current of vital energy. The Church of England preacher who offered lessons replete with passages of Latin and Greek undoubtedly lost his audience, even as he gained their reverence. Yet Cragwall overstates the case at times: for while it is surely true that the tone of collegiate disputation, "complete with classical allusions," left some parish congregants bewildered and confused, John Wesley was himself trained at Oxford, and his popular sermons found rapt audiences in both local societies and print despite his conventional presentation and allusions to classical authors. So, while Methodism did threaten a "literal cult of sentiment" to some degree, the Wesleys hardly celebrated the "naked … insularity of nothing but the heart's affections and the truth of the imagination," as Cragwall suggests, picking up a theme from some early observers of the movement.

When Cragwall turns to Wordsworth, some of the most famous lines of Romantic encounter with nature are transformed into scenes of methodistical piety. In such a light, Wordsworth's Prelude reads not as the work of nature's poet but rather of nature's lay preacher:

to the open fields I told
A prophecy: poetic numbers came
Spontaneously, and clothed in priestly robes
My spirit, thus singled out, as it might seem,
For holy services. (1805; 1:59-63)

The poet takes up the garb of the field preacher in what amounts to a "deliberate array of transgressions: prophesying, field preaching, clerical ordination impelled by the Spirit rather than the Church, and a providential 'singling out.' " Wordsworth thereby participated in the loathsome fascination with the self that Methodist spiritual autobiographies and conversion accounts were successfully propagating. The Prelude seems less a poem of great genius communicating modest accomplishment in subtle verse, and more a work of testimony akin to the commonplace quackery familiar to readers of the Arminian and Methodist magazines. No wonder he withheld the work from the publishers.

In Coleridge, Cragwall finds enthusiasm once again, though now cloaked in the fragmentary garb of the mystic sage. As a young man, Coleridge had traveled the Bristol area as a Unitarian lay preacher, offering lectures on politics and religion that delighted audiences with the early signs of his genius. Yet the Unitarianism that Coleridge inherited from Joseph Priestley and William Frend ultimately left him unsatisfied: "Socinianism Moonlight—Methodism &c A Stove. O for some sun that shall unite Light & Warmth."[2] Led by the unlikely confluence of Paul and John with Spinoza and Kant, Coleridge returned to the Anglicanism of his youth and eventually gained prominence through works of notorious complexity. Cragwall focuses on Coleridge's much-discussed Lay Sermons, particularly The Statesman's Manual (1816), a work often anthologized for his explanation of Reason and Understanding as well as the idea of the symbol. Intentional contradictions abound: "The Lay Sermons are political and rhetorical oxymorons, daring the conflation of refinement with vulgarity, recondite wisdom with senseless jargon, plebian with clerical culture—and they darkly hint that the negative capability of this daring, rather than the practice of nuanced division, is the best evidence of a supple mind and subtle society." In short, Coleridge advertised logic and sophistication in a sermon "for the higher classes of society" under a title beckoning the attention of the masses. The text thereby subverts rhetorical conventions through esoteric reversals of language and meaning—"political dog-whistles," Cragwall calls them in one of many excellent turns of phrase, "pitched beyond the range of most readers."

Wordsworth and Coleridge as participants in an enthusiastic subversion of "good sense"? The contention is provocative. Two prominent cases in Lake Methodism illustrate Cragwall's theory. Joanna Southcott rose to public fame as fast as any English woman of the times. Her many failed prophecies, as wildly popular as inaccurate, finally were overshadowed by claims to a virginal conception that captured the gaze of the nation's print culture. Southey's cutting denunciations of Southcott's writings indicate something of the public uproar over her fanatical assertions: "rhapsody of texts, vulgar dreams and vulgar interpretations, vulgar types and vulgar applications: the vilest string of words in the vilest doggerel verse, which has no other connection than what the vilest rhymes have suggested." For all these words of (im)polite protestation, it was the wonder of Southcott's body that the public craved—a visible sign of prophetic promise—and only the death of her body signaled the demise of her writings from public view. Similarly, Mary Shelley's Frankenstein belongs to the same sphere of prophetic witness as Wordsworth's spontaneous preaching in the field, Coleridge's mystic desynonymization, and, most important, the animated fanaticism of Southcott's corpulent frame. For while Victor Frankenstein's creation is thoroughly naturalized and his "errors are those of a man too well educated, so supremely privileged that his very monsters are the deformities of his class advantages," his hubris bears Southcottian marks of religious enthusiasm. Shelley's account of the enlightened monster depends on a figure who is not so much created as resurrected (nothing short of a new birth), plays on widespread public interest in the death-bed scene, and culminates in the assurance of forgiveness from guilt and the restoration of innocence. These bodies of death—whether Southcott's or Frankenstein's monster—reveal the pervasive enthusiasms that polite literature failed to destroy.

Cragwall's new interpretations of these familiar texts reveal the ubiquity of "enthusiastic" religion in the Romantic era of English literature. Along the way, he occasionally overstates his case with more zeal than substance. Cragwall embraces a skeptical reading of Methodism that alleges the movement's inherent contradictions, ever nimble but always contradictory. But such a reading, however fashionable, risks confusing form and content. So, while it is possible to interpret the outward forms of Methodism as oppositional or destabilizing to the content of belief—as when Cragwall concludes that "Wesley's unprecedented effect had little to do with his theology, and much to do with the fashion of his clothes, the cut of his hair, and the electricity of his gaze"—such a leap gambles on ignoring the significance of a theological content worked out in practice that spread evangelical Christianity around the world.

Indeed, such a division isn't even necessary. Cragwall's creative interpretation of Romanticism and religion stands on the basis of Methodism's pervasive influence on English popular culture alone. He effectively applies historicist methodology to offer a new account of the role of religion in the formation of Romantic literature. Studies based on categories of identity such as race, class, and gender have far outstripped readings based on religion, denomination, and belief, but old tropes die hard. Religion, Cragwall claims, deserves a more prominent place at the table: "The canonical landscape has shifted tectonically over the last decades, as many new anthologies have emerged with aggressively revisionist programs, yet the sermons, spiritual lessons, hymns, theological disquisitions, and at times unsanctimoniously moralizing prose and verse that were some of the best-read texts of the Romantic period remain largely unrepresented." The reverse is also true: with metaphor and irony abounding in sermons and prophecies alike, scholars of theology and religion need literary critics such as Cragwall to destabilize the familiar and routine. Romanticism and religion belong together—and only a "madman" would say otherwise.

Jeffrey W. Barbeau is associate professor of theology at Wheaton College. His most recent book, Sara Coleridge: Her Life and Thought (Palgrave Macmillan), is an intellectual biography of Samuel Taylor Coleridge's daughter. He is currently editing an anthology on Christianity in England between 1750 and 1832 for Baylor University Press.