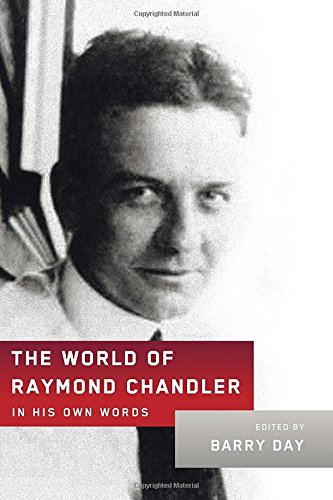 Night of a Thousand Crimes

Raymond Chandler and the world of noir.
July/August 2015

The living room is dim and stuffy. Dust motes hang in the air. Walter Neff, insurance salesman, is about to help Phyllis Deitrichson, blonde sexpot, take out "accident insurance" on her husband, and it's not going to end well. Even if Walter's opening voiceover hadn't told us as much ("I killed him for money—and a woman—and I didn't get the money and I didn't get the woman"), viewers today can easily guess. We're familiar with the hardboiled detective, the femme fatale, and the doomed protagonist caught in her web, because the film noir genre has been using these archetypes since, well, since Double Indemnity. It wasn't the first crime drama, but it was the first to be written by Raymond Chandler, who heavily influenced detective fiction and the fledgling noir genre with his biting wit and unexpected morality.

Chandler, a notoriously difficult collaborator, made the writing of the screenplay "an agonizing experience" for director and co-writer Billy Wilder. Though the film was based on James M. Cain's novel, Chandler insisted on throwing out all of Cain's original dialogue (to Wilder's chagrin), replacing it with sly back-and-forths only he could have written:

Gems like this fill The World of Raymond Chandler, a splendid miscellany compiled by Barry Day, which links excerpts from Chandler's fiction, essays, screenplays, and letters with an intentional minimum of editorial input. Day covers the biographical highlights in the first chapter: American-born, British-educated, Chandler married his beloved Cissy Pascal and settled in Los Angeles, was fired as a vice president of an oil syndicate for drinking and womanizing, published his first hardboiled detective novel (The Big Sleep) in his mid-forties, and died in 1959 at age 70 of pneumonia related to his alcoholism.

Day is more interested in letting Chandler talk to us about the capital-T topics of his life: writing; Philip Marlowe, the protagonist of his novels; Los Angeles; women. (Day's choice to slot homosexuality and cats in the chapter dedicated to Chandler's "dames" is a strange editorial decision that I will not try to unpack.) Chandler comes off variously as curmudgeonly or charming or sarcastic, always with a wit keen enough to shave with. Read his words long enough and you'll find yourself slipping exaggerated similes into normal conversation. Try telling your main gal she "smells the way the Taj Mahal looks by moonlight" or that she "could make a bishop kick a hole in a stained glass window."

But as enduring as Chandler's writing is, his greatest legacy may be his influence on the classic era of film noir: the black-and-white crime dramas of the 1940s and '50s, famous for femmes fatales draped in slinky dresses and ulterior motives, world-weary private detectives with drinks in hand, shadowy alleys with yesterday's rain puddling in the cracks of the asphalt. This world bears little resemblance to previous whodunit-style crime stories, where a gentleman detective solves the murder at a dinner party surrounded by posh women in furs. Chandler credited contemporary Dashiell Hammett for "[giving] murder back to the people that commit it for reasons, not just to provide a corpse; and with the means at hand, not hand-wrought dueling pistols, curare, and tropical fish," but Chandler himself had much more to do with bringing the murder mystery to the mean streets of L.A.

This noir world is dangerous and depraved, but it's rendered (as Chandler's successor Ross Macdonald observed) with the dark poetry of "a man who can write like fallen angel." In The Long Goodbye, Marlowe describes his city thus:

Far off the banshee wail of police or fire sirens rose and fell, never for very long completely silent. Twenty-four hours a day somebody is running, somebody else is trying to catch him. Out there in the night of a thousand crimes, people were dying.

This portrait resonated with a generation tired of war and systemic corruption—and, sadly, it resonates with contemporary audiences for the same reasons. Postwar America resembled the harsh noir world more than it resembled the sleepy English village, and Chandler's readers needed a hero to match: enter Philip Marlowe, private eye. Marlowe likes "liquor and women and chess and a few other things." He'll notice a beautiful pair of legs but won't allow himself the luxury of a romantic affair, even of the stringless variety. Marlowe can take a punch, and he's been known to break a rule or two. He doesn't get along with police or criminals—usually because he can't resist wisecracking—but no red tape or threat can keep him off the trail once he's picked up a scent.

Chandler didn't invent the hardboiled detective, but he unearthed something new and irresistible in his world-weary protagonist: a gooey caramel center. Marlowe is a tough guy whose "toughness has always been more or less a surface bluff," according to Chandler. He took the poker-faced pulp detective and showed us his hand, as he explained in a letter to his publisher:

[Marlowe] will at any time … meet any danger, since he thinks that is what he was created for, and because he knows the corruption of his country can only be cured by men who are determined if necessary to sacrifice themselves to cure it. He doesn't talk or behave like an idealist, but I think he is one at heart; and I think he rather hates to admit it, even to himself.

Marlowe isn't much interested in what's right in the eyes of the law or society, but he does have an internal moral code that is fundamental to his character. This code, which the shamus himself would never verbalize, rests on the inherent value of human life, that no matter who a murder victim was in life, he or she deserves justice. The victim in Farewell, My Lovely is Lindsay Marriott, a pretentious, decadent blackmailer and thinly veiled homosexual—exactly the type of man Marlowe detests. Regardless of his personal prejudices, Marlowe investigates Marriott's murder with his usual single-mindedness, even though no one hired him to do it. Marlowe is the representative of justice in an unjust world. He is unbiased and apolitical in his work, in direct opposition to the corrupt institutions that regularly thwart him.

Classic film noir, like Chandler's work, favors karmic justice over legal justice. While the detective may bring the truth to light, he is almost always the witness to rather than the arm of justice. This is because in the world of noir, wrongdoers are most often taken down by the natural consequences of their actions, not the law. The cops may show up at the end—often so the private detective can walk them through the case—but a culprit's fate is more often death by suicide, revenge, or accomplice.

Betrayal is the noirest of noir endings. As in Double Indemnity, The Postman Always Rings Twice, and many a Chandler novel, hoodwinking the cops is only the first hurdle for accomplices, who are aware of one another's capacity to do harm. They must survive jealousy, greed, and suspicion to really get away with the crime. From 1934 to 1954, the Production Code mandated that criminals had to be shown to pay for their actions, but in the case of film noir the restrictions may have acted more to solidify the core morality of the genre than to limit it. The novels of Chandler, Hammett, and Cain were not subject to the Code, and yet they laid the groundwork for these noir fables about the destructive power of greed. (And it is nearly always greed that destroys—Chandler's plots are complex, but his motives are classically simple: love and money.)

Neo-noir films (those made after the classic era of the 1940s and '50s) are rarely the cautionary tales that their forerunners are. It's common for the baddies to win, as in Chinatown, Body Heat, The Usual Suspects, Memento, and recently Nightcrawler, to name a very few. Rather than the grim moral tales of Chandler, neo-noirs are more often psychological character studies, where ambiguity reigns and motivations are complex. They may traffic in the tropes Chandler invented, but many neo-noir films seem to have given up the expectation not only of legal justice but of justice of any kind.

This is not to say Chandler's outlook has disappeared. There are still filmmakers today, like Joel and Ethan Coen, who create fable-like crime dramas that warn of greed's power to destroy. And then there's television: police procedurals play in every living room and doctor's office, and Marlovian soft-hearted toughs feature prominently. As in the noirs of the Production Code era, the probability of justice prevailing in these shows is near 100 percent—though here it's the format and episodic nature of the genre that necessitates it.

But outside the strict constraints of the network procedural, shows and films that choose the just ending are often sneered at. Take HBO's recent True Detective. Its hero, Rust Cohle is, like Marlowe, a loner who's sacrificed himself to the job. Cohle portrays himself as a nihilist, but in the final moments of the show (spoiler), he reveals an inner optimist: "Once there was only dark. If you ask me, the light's winning." The New Yorker found this finale "disappointing," as did many other critics and viewers, including yours truly. (The Atlantic was particularly harsh: "a high-budget genre retread with the false veneer of profundity.") Maybe we don't want to know the moral of the story.

Or maybe we just don't want to hear about it. Contemporary crime audiences are more suspicious of melodrama than Chandler's readers were—even melodrama wrapped in layers of hard-boiled dialogue. An emotional climax must be well-cloaked in self-awareness; otherwise it just feels played-out or, worse, naïve. As long as there are dead bodies in dark alleys, there will be Marlowes who'll try to convince us to be good, even if we don't know whether we believe in goodness. They'll just have to do it without us noticing.

Dayna Clemens is a validation engineer from Glen Ellyn, Illinois. She has poetry upcoming in Bird's Thumb and Dogpond Magazine.