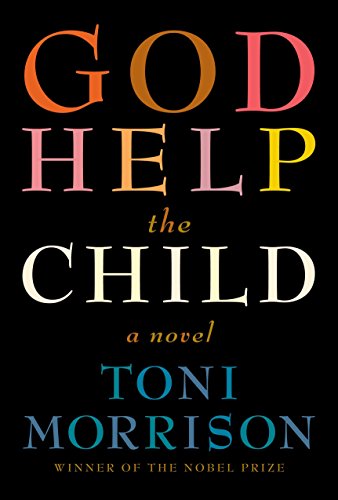 A Handsaw Wrapped in Felt

In the first and longest part of Toni Morrison's new novel, God Help the Child, four women take turns narrating. Since the novel tasks each of them with relating some present dysfunction or past trauma (or both), they prove an uneasy quartet. Three of the four, moreover, know each other either not at all or solely by reputation. Which means that the woman at the center of this loose affiliation—she calls herself Bride—is all that holds Part 1 of this book together.

So let's begin with Bride. Bride is in her early twenties, and she comes across as savvy but trite. Take, for instance, the fact that she follows the advice of her " 'total person' designer" to the letter and wears, always, white or some variant thereof ("ivory, oyster, … snow, … ecru, Champagne, ghost, [or] bone"), thereby flaunting her very dark skin. Then again, its superficiality notwithstanding, this wardrobe works wonders for Bride: she grows into a confidence that she begins by feigning; she bewitches men; and she earns a chance to launch her own line of make-up, "YOU, GIRL: Cosmetics for Your Personal Millennium."

Indeed, just before God Help the Child begins, Bride—what with her professional cachet and a lover who calls her his girl—feels as close to content as she ever has. Or, to be more precise, she feels as content as she did at eight years old, when her mother held her hand—a gesture out of keeping with every known precedent—on their together walking out of a courtroom where the little girl testified against a teacher accused of pedophilia.

And this mother? To start, she does not christen her daughter "Bride." She christens her Lula Ann Bridewell. Immediately afterward, she also re-christens her "high yellow" self "Sweetness," not wanting this baby who "turned blue-black right before [her] eyes" to claim her as "Mama" or "Mother" or to otherwise tar her reputation. In fact, as she is instinctively dismayed by her daughter's complexion (or so she says), Sweetness holds the child aloof from the beginning—with one exception: the immediate aftermath of Lula Ann's testimony against Sofia Huxley.

Bride's and Sweetness's voices, then, frame the first part of God Help the Child. But Morrison's story also filters to us through two other narrators: Bride's shallow, grasping friend (the implausibly named Brooklyn) and Sofia Huxley, the woman whom Lula Ann Bridewell doomed to a 15-year-long prison sentence. As for the book's subsequent three parts, they allow Sofia, Brooklyn, and Sweetness to continue speaking for themselves and even pull in, for a cameo, one more first-person narrator (a girl named Rain).

As soon as Part 1 ends, though, an external narrator takes over telling Bride's story in the third person. Strangely, this unexplained change in the novel's point of view makes its main character more likeable. Don't misunderstand me. Bride is sympathetic from the novel's first page, if only because Morrison wastes no time in divulging Lula Ann Bridewell's ugly childhood. In the first person, though, Bride seems false. She shrugs and panics over the wrong things. She is self-absorbed. Or maybe she is just too practiced at self-protection—so that she dams and funnels her feelings according to rules I don't understand. That could well be.

Whatever the case, I liked Bride better when an omniscient narrator stood between us, filtering the character's impulses and poses. And I liked God Help the Child better, too—partly because its third-person narrator does not just assume responsibility for Bride but also widens the storytelling to include her lover, Booker Starbern.

Admittedly, that this narrator would train any omniscience on Booker feels odd at first. At first, in fact, Booker seems tertiary to Morrison's novel, a mere trigger to set its main character's unraveling in motion. He makes a big exit, after all, on the book's sixth page, leaving Bride with the six words "You not the woman I want." He begins as a catalyst for Bride's "feel[ing] like [she's] melting away," not as a character.

In the long run, however, what Booker does for this novel's plot (which continues to center on Bride) is nothing next to what he does for its texture. Booker is the only character in this fiction whose past is fully drawn. Well, fully drawn and then partially erased, for he (like every other major character in God Help the Child) has suffered; his innocence, like Bride's and Brooklyn's, like Sophia Huxley's and Rain's, was spoiled early.

Still, throughout Booker's backstory, sweet details crop up. My favorite is his family's Saturday morning custom: Booker's parents quiz and him and his six siblings, asking "what [they have] have learned that is true" (the answers compass worms and chess) and "what problem [they] have" (the answers include acne and algebra). Whatever the kids' replies, though, family tradition never wavers; a lavish breakfast follows these interviews. Of course, this weekly sacrament falls away when a brutal, sudden death intrudes on the Starberns' crowded, happy domesticity. What's more, the ritual's eventual return is farce, play-acted in the "hop[e] that cheer, if worked at hard enough, could sugar the living and quiet the dead."

Here's the thing, though. Even as Booker nurses bitterness, Morrison turns out striking phrases to describe it or, more often, to name the sweetness lost. For example, even as his story rules out that pair—the sugared living and the quieted dead—it conjures their beauty. Her writing about Bride never fuses, as ably, her acumen about suffering and her knack for poetry. But I only almost wish it did.

In other words: I could not wish, as anything but a critic, to see Bride's awful upbringing (or its other characters' torments) made more vivid. Already this fiction wrings and spooks my heart with its least gesture to what twists children's limbs and pasts. So how could I wish for Morrison to render with more perfect rigor the evils done children, the harm they absorb?

The truth is I couldn't. I don't. The truth is that I have always turned away from it, maybe squeamish but mostly just stricken: the suffering of children, the discomfiting truth that kids are not exempt from one or another cruelty on the grounds that they could not imagine it. Maybe that should trouble my conscience, too: the impulse to turn away. But God Help the Child is not the fiction to bring about my reckoning on that point.

That said, to survey Morrison's other ten novels is to find that, more often than not, her fiction does compel readers to reckon with what they would rather turn from. Her novel Beloved stands as the obvious but apt example. Its characters suffer impeccably. They matte their humiliations with incredulous laughter. They trim every hysteria from their traumas. They cohabit with ghosts. They hazard metaphors that end up impinging on reality. And readers shudder and weep but cannot shrug or look elsewhere because Beloved's prose is a sure thing.

In God Help the Child, too, readers will find Morrison's perennial insistence that the past haunts the present, as well as figures of speech that impose their truths supernaturally on its characters' flesh and bone. And, as is obvious by now, this new book's plot pivots through a patterned trauma, like the Nobel laureate's other fictions. This fiction, however, is a blunter instrument than its predecessors.

Beloved is a handsaw wrapped in lace. God Help the Child is wrapped in felt—so that neither the pain it describes nor the pain it inflicts is exquisite. That was, for me, a greater mercy than it was a disappointment, but, yes, the novel is the less for it.

And the less, as well, for the blurry redemption that it projects, occasioning the sarcastic prayer that gives the book its title, Sweetness's dismissive "God help the child." Maybe, in the end, that phrase also names the story's failing. It articulates such a general prayer, a prayer that, sincerely meant, could apply to virtually any character drawn in these pages, but it singles out none—and thus, like God Help the Child as a whole, it forces no one to their knees.