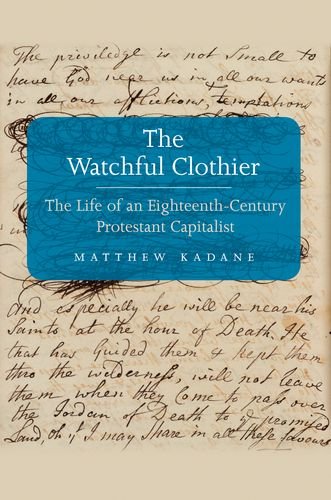 Watchman, What Do You See?

The inner life of an 18th-century Protestant capitalist.

Kadane skillfully highlights the reasons why "Old Dissent"—the Puritan-descended Congregationalists, Presbyterians, and Baptists that predated the rise of Methodism—could retain such a strong emotional hold on its adherents. A primary reason was mortality. Ryder's diaries record hundreds of deaths among his fellow Leeds Dissenters and in the wider circles touching these two congregations. A "junkie for funerals," in Kadane's phrase, Ryder was buoyed up by his strong personal faith through the often premature departures of so many who were near and dear, including his own wife Elisabeth, who died in 1754. That same faith also moved him to many acts of altruistic care for families who bore these losses. In Kadane's depiction, Ryder's life is a beacon illuminating a sturdy cohort of British Christianity that the excitements of theological conflict and evangelical awakening have obscured.

The wider importance of Ryder's story concerns his watchfulness as a merchant. Kadane's account of a mid-level Protestant at work in the early stages of modern consumer capitalism deals, as all such studies must, with Max Weber. Kadane's careful research into the circumstances of Ryder's life equips him for discerning judgment about Weber's famous claim concerning an "elective affinity" between Calvinist theological conviction and modern capitalist instincts. If Ryder's life does support Weber's general picture of religious and economic interaction, Kadane finds that interaction far too complex for simplistic assessment of religious cause for economic effect, or vice versa.

For Christian assessment, the important questions lie elsewhere. Joseph Ryder's life underscores the astute conclusions of Mark Valieri's recent study of New England's economic life in the 17th and 18th centuries.[2] In his splendidly researched book, Valeri showed that as New England's history unfolded, personal piety, biblical conviction, and general religious seriousness remained strong. Yet, crucially, as the decades passed, these Puritans more and more accepted the structures of British economic development without a further thought. They remained dedicated students of Scripture, but—in contrast to the first New England generations—they did not bring Scripture to bear for assessment or discipline of the mercantile practices that had come to prevail in the expanding British Empire.

Joseph Ryder seemed much the same. His diaries overflow with watchfulness concerning the effects of his business on his personal standing before God: Is he more concerned with worldly achievement than his eternal destiny? Has he taken unwarranted pride in his mercantile success? Is he using his wealth for godly purposes or hoarding it selfishly for himself? "Considering with what pains & difficulty I see many persons Obtain the means of Livelihood" (to quote one of many such entries, p. 96), has he kept himself unspotted from the world?

What the diaries do not record, however, are questions about the system that provided his livelihood. He did not, for example, seem to worry about the justice of the military ventures that expanded Britain's empire, and thus expanded the trading opportunities from which a diligent clothier could profit. He never commented on the crucial role that slavery and the slave trade played in stimulating the international exchanges that fueled the demand for finished cloth. Although Ryder displayed unusual generosity in opening his home to several generations of apprentices, he did not comment on how the increasing centralization of cloth manufacturing squeezed out small-scale operators and brought distress to their families. In other words, this admirably pious Dissenter maintained exquisitely detailed watchfulness for his soul in the midst of its business activities, but almost no watchfulness about the ways and means of those practices themselves.

Readers should not expect Matthew Kadane to address such broader concerns. His deeply researched and gracefully written volume stands very well on its own. Among those who read it with appreciation, some may conclude that Ryder's personal watchfulness offers positive traits to emulate, along with a few (especially obsessive introspection) to avoid. But they may also go further to wonder about what it would have taken to bring a similar watchfulness to bear on the economic and imperial systems that Leeds' pious clothier, as a Christian merchant at home in the modern economic system, simply took for granted—and what it would require of a believer to exercise such watchfulness today.