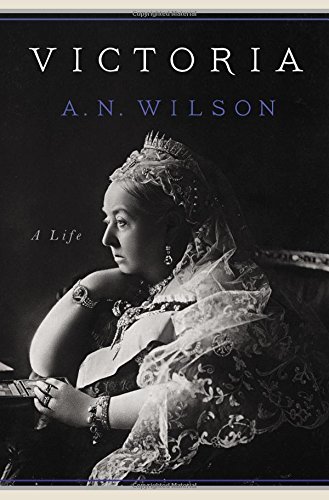 One day in April 1838, the writer Thomas Carlyle saw the "poor little Queen," then eighteen, passing through London in an open carriage. In a letter to his mother he praised Victoria's healthy appearance but noted that she appeared "timid, anxious, almost frightened; for the people looked at her in perfect silence." After her death in 1901, Henry James wrote, "I mourn the safe and motherly old middle-class queen, who held the nation warm under the fold of her big, hideous Scotch-plaid shawl."

The beginning and end of a reign; a journey from callow youth to protective grande dame. On that journey, Victoria became the mother of nine and grandmother of 42 children, and not only Queen of the United Kingdom of Great Britain and Ireland but also the matriarch of royal Europe. The biographer and novelist A. N. Wilson gave her only a cursory glance in his 2003 bestseller The Victorians, his main focus being on her subjects and her country's social, political, and economic transitions and upheavals. Now, in Victoria: A Life, he devotes a whole book to a woman he numbers "among the most fascinating and self-contradictory of all British monarchs."

Wilson opens not with a birth but a background. In a chapter amusingly entitled "Zoology" (after Karl Marx's assertion that "the secret of nobility is zoology"), he unravels the tangle of 19th-century royal lines, revealing the interconnectedness of the international monarchical systems and Victoria's dynasty-building forbears. Although her father, Prince Edward, died shortly after her birth, Wilson questions Victoria's claim that she had a "melancholy childhood." Growing up in Kensington Palace, she was cossetted by her German mother and various female attendants and played with a half-brother and half-sister. She developed a talent as a watercolorist and, more important, a candid and lively journal-writer.

Adolescence brought a crucial revelation and a critical stage: the former, the discovery that court life was "a snakepit of mutual hatred and slander"; the latter, early maneuvers in the "gruesome warfare" between conflicting parties to select rival marriage partners for her. The life-changing turning-point arrived in 1837, when, after the death of her uncle, William IV, Victoria inherited the throne.

Wilson presents a teenage queen who was, in the words of one army officer, no more than an "ignorant little child." And yet she was both keen and quick to learn—which must have been a relief to the man who groomed her for her role as head of state, her prime minister, Lord Melbourne. After Victoria marries her Coburg cousin, Prince Albert, in 1840, the narrative shifts to a decade dominated by childbirth. Wilson remarks, primly but correctly, that "each coition was not only an act of love, but a gesture against the swell of European republicanism."

In the following decade, Victoria's reign was rocked by war in Crimea, mutiny in India and unrest in Ireland. On the domestic front, the pressures of her mammoth workload impinged upon her motherly duties and, as a consequence, impaired her maternal instinct: "It is indeed a pity," Albert wrote to her in October 1856, "that you find no consolation in the company of your children." Violent mood swings and bouts of weakness led doctors to worry that she might have inherited her grandfather George III's insanity. But her real annus horribilis was 1861, when she lost both her mother and her husband. In her desolation, she became a secluded, sable-clad widow. Even so, Wilson goes against the grain of previous biographers by arguing that while there were dark moments when she could barely function, for the most part she remained politically engaged.

The queen's personal attendant, John Brown, became a source of solace during her widowhood, much to the consternation of family, courtiers, and politicians—although Wilson admits he is unable to make up his mind as to whether there was anything stronger than a monarch-and-servant relationship. Her popularity with her people waned as she shunned society but surged in her later years, especially in 1896, when she was declared Britain's longest reigning monarch, and in 1897, when she was paraded through London in celebration of her Diamond Jubilee.

Since her death in 1901, Victoria has been a popular choice for biographical study. Lytton Strachey's Queen Victoria (1921) was one of the first, and Elizabeth Longford's Victoria R.I. (1964) one of the best—a book Wilson magnanimously, if hyperbolically, calls "a gigantic achievement which will never be replaced." His own telling of the story is an excellent work which ranks high not only among previous Victoria biographies but also among Wilson's previous biographies. The secret to his success is his decision to go back to basics and use as often as possible the queen's letters, journals, and diaries as primary source material. Through these personal accounts we get unexpurgated thoughts and emotions. In her journal during her time as Melbourne's protégé, she seems to Wilson much younger than her eighteen to twenty years. In her letters of 1869, Wilson finds "a vast disparity between the letters in which Victoria, however strong-willed and contradictory, was in control of herself and commenting upon affairs, and those in which she is hardly able to wield a pen." She describes her wedding as "the happiest day of my life!" The Great Exhibition of 1851 renders her ecstatic: "God bless my dearest Albert, & my dear Country which has shown itself so great today. One felt so grateful to the great God, whose blessing seemed to pervade the whole great undertaking." She feels "a good deal agitated" on the morning of the Diamond Jubilee and almost as nervous on her first daughter's wedding day.

Wilson is astute in his analysis of the men of Victoria's life. He subverts the conventional wisdom that her marriage to Albert was the defining fact in her "personal mythology," rightly declaring that she lived for over eighty years, and was married for a mere quarter of that time. In many ways, he continues, "we can say that we see her most clearly being herself in those platonic male friendships which were based on shared humor," with John Brown, Melbourne, and successive prime ministers Robert Peel and Benjamin Disraeli.

The book is at its best when we see Victoria stripped of pomp and circumstance and acting not according to royal protocol but on human impulse. Unlike her predecessors, whose excursions into parts of their kingdom involved visiting one stately home after another, Victoria and Albert explored mines, factories, farms, and the industrial north. This, for Wilson, was Victoria extending the function of the monarchy, "demonstrating the Royal Family as interwoven with the new destiny of Britain." When Jack the Ripper terrorized London, she upbraided the government for not providing adequate street lighting in the East End, insisting that "these courts must be lit and our detectives improved" and, for good measure, compiling a checklist of procedures for the police to consult. "[I]t is fascinating to think of the Queen herself as a detective," Wilson adds.

The Victoria that emerges from Wilson's book is a flawed but noble individual. She is indiscreet, capricious in her tastes, and, for a large chunk of her reign, politically inarticulate. She has a limited supply of maternal affection and emotionally neglects her needy mother to concentrate upon her marriage and the duties of a constitutional monarch. Perhaps most surprising is her "strongest aversion for the so-called & most erroneous 'Rights of Women.' " But she was also deeply patriotic, incredibly robust and self-assured, and endowed with a valuable intuitive sense of national mood and feeling. On several occasions Wilson offers glimpses of her lighter side: dancing in the Scottish Highlands, gleefully defying the Establishment, and delighting in customary flattery from Disraeli ("Dizzy").

Wilson has done a thorough job of trawling Victoria's surviving correspondence (many of the journals and letters "in which the Queen expressed herself so forcefully, so freely"' were destroyed after her death by her daughter Beatrice) and thus furnishes us with as rounded a picture as possible. Complementing—or at times contradicting—the queen's views are numerous quotes from those around her. Particularly effective is Wilson's liberal scattering of references to or quotes from eminent Victorians: Tennyson, Hardy, Darwin, and—a favorite of the queen—Charlotte Brontë. (In one neat artistic touch, Wilson depicts John Brown as a composite of Walter Scott heroes.) All that is lacking is commentary on Victoria's own literary achievement, her two-volume Leaves from the Journal of Our Life in the Highlands. Wilson also overlooked the verse of Elizabeth I when compiling a detailed portrait of the Virgin Queen in his 2012 book The Elizabethans. In both cases a pity.

But such a minor omission cannot blight Wilson's informative and immersive biography. It is satisfying to see him working again on a large canvas. Size matters with Wilson: his shorter biographies such as Jesus (1992) and Hitler (2012) can be slight and shallow, whereas in-depth doorstops like Tolstoy (1988) are not merely longer and more detailed but much deeper, yielding substantial insights. As befits its subject, Victoria: A Life is a long book, meticulously researched and comprehensive in scope. It is also entirely convincing. Closing it, we banish the standard image of a starchy taciturn widow perpetually in mourning and side with Wilson in believing Victoria to be "one of the most passionate, expressive, humorous and unconventional women who ever lived."

Malcolm Forbes has written for the Times Literary Supplement, the Economist, and the Daily Beast. He lives in Edinburgh, Scotland.