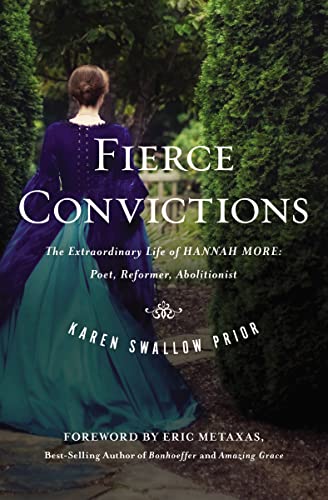 In January 1809, all of fashionable London society was talking about one book: Coelebs in Search of a Wife, the first and only novel by the then-famous evangelical poet, abolitionist, social reformer, and prolific pamphleteer, Hannah More. At least one reader had a different response, though. Here is Jane Austen, writing to her sister Cassandra: "You have by no means raised my curiosity after Caleb [sic]; —My disinclination for it before was affected, but now it is real; I do not like the Evangelicals. Of course I shall be delighted when I read it, like other people, but until I do I shall dislike it."[1] Ah, the perils of popular literature for the literary snob.

Coelebs tells the story of a godly young man's search for an ideal wife in a culture where women were not often encouraged to develop their minds. Fashion, needlepoint, dancing, a smattering of modern languages, a little ability in music—these were the achievements that would qualify a woman as "accomplished," and thus ready for marriage. But what the protagonist, Charles, wants is a wife capable of running a household, holding sensible conversation with her husband, raising and educating their children, and setting an example of moral propriety and spiritual maturity for the neighbors.

For literary scholars, Coelebs marks an important turning point in the history of the novel—the point at which the conduct manual, the didactic essay, and popular fiction were combined to make possible, in Karen Swallow Prior's words, "the genre's transformation from lowbrow to high art in the hands of historic nineteenth-century novelists such as Charles Dickens, the Brontë sisters, and William Makepeace Thackeray." Coelebs also marks a gradual sociological shift that had been happening throughout the 18th century: marriage was no longer primarily viewed as an economic relationship cementing familial or political alliances but rather as an individual's choice of sympathetic helpmeet. This model of companionate marriage required that women be much better educated than in previous generations, if only for the purpose of being better companions to their husbands. More's novel was one of the most successful pieces of propaganda in that movement to reform women's education.

Prior's excellent (and handsomely illustrated) biography, Fierce Convictions: The Extraordinary Life of Hannah More, aims to introduce this "forgotten reformer" to a much larger audience. And More is well worth careful attention—in no small measure because the lifelong tension she felt between the didactic, religious purposes of her writing and the formal, aesthetic considerations of her literary ambitions mirrors a fundamental tension at the heart of evangelicalism itself: the difficulty inherent in attempting to simultaneously critique culture and make culture. As one publisher commented to More about one of her plays, "You are too good a Christian to be a dramatic author."

Hannah More was as much a product of her time and place as each of us is: her birth in 1745 coincided with the birth of the evangelical movement in Britain. George Whitefield and John and Charles Wesley were already preaching, writing hymns, and changing the moral landscape of Britain and her colonies. And just three years later, John Newton would famously make his conversion to faith in a personal God in the midst of a storm at sea. Equally significant to More's later development as a reformer was her birthplace: Bristol. As the second largest city in Britain and a major port, Bristol derived much of its impressive wealth and influence from the slave trade—exposure to which influenced More's impassioned opposition.

Early biographers of More presented her parents as respectable and well-educated people living just on the fringes of the landed gentry. But recent research has revealed that More came from a lower social status than was long thought—her mother may have been a servant, and her father may have been dismissed from his position as a bailiff for "taking advantage" of the girl, a full twenty years his junior. Prior's humanizing and light touch with her subject is here in full view: "Jacob More appears to have been a man of some questionable scruples scrambling to make his way haltingly through life. If this—or worse—was the case, once grown, his pious and proper daughter likely struggled to reconcile the person she had become with the people from whom she came."

For More and her four sisters—with no wealth or connections to recommend them—there could be only two options in life: marriage or teaching. As the More girls grew older, they decided to found a "school of sisters" in which they would teach the daughters of Bristol's newly wealthy families. At a time when women's education was being vigorously debated, they did not enter into this business lightly. Prejudice against education for women was rampant, and even the accomplished poet Anna Letitia Barbauld remarked to a friend considering opening a girls' school that, "Young ladies ought only to have a general tincture of knowledge as to make them agreeable companions to a man of sense, and to enable them to find rational entertainment for a solitary hour." The More sisters rejected such low expectations, and their school developed an excellent reputation among middleclass parents eager to give their daughters every educational advantage. As Hannah More said later in her life, "A woman cannot have too much arithmetic."

In 1767, the lively, witty More became engaged to one William Turner, a local landowner who seemed to value her intelligence above anything else. The engagement lasted six years—not, in itself, all that unusual. What was extraordinary was that William agreed three times to a date for the marriage, only to back out each time as the event approached. Incredibly, the third jilting took place when Hannah was literally standing at the altar. William sent a note of apology, and then asked if maybe they could reschedule the wedding for another time.

It is tempting to turn this episode into a funny vignette, but Hannah must have suffered terribly, and that experience of rejection and bitter absurdity seems to have primed her to both recognize and empathize with the suffering of others. Just as important, the broken engagement also made possible More's literary career. When she refused to marry Turner after his last no-show, her friends negotiated with him to provide an annuity that would enable More to devote her time to writing plays and poetry and to traveling back and forth to London. One of the delights of Prior's biography is her recreation of the glittering literary and artistic world of which More was a part. Horace Walpole, the politician and Gothic novelist; Samuel Johnson, the era's most important man of letters; David Garrick, the greatest actor of his age; Eva Garrick, David's even more famous opera-singer wife; and Sir Joshua Reynolds, the great portrait painter of the age—each of them admired or mentored More in her literary ambitions.

While More did achieve popular literary success, she was increasingly drawn away from the city and toward the country, away from literary production and toward cultural reformation, away from fashionable society and toward the poor and marginalized. By her mid-forties, More was active in the Clapham Sect, one of the most influential abolitionist groups of the period, and she was a close friend of William Wilberforce. The abolitionist movement took decades of indefatigable work from More, but she still found time to be deeply involved in almost every other major reform movement of the late 18th and early 19th centuries: the education of the poor through the first Sunday schools; the expansion of workers' rights; the prison reform movement; the Bluestocking Circle advocating for women's education; and the nascent animals rights movement.

Given her enormous energy and admirable principles, it might be tempting to regard Hannah More as something like an evangelical saint. But Prior renders her subject with psychological nuance and depth. According to Prior, More's great failing was social vanity, seeking too much after the praise and approval of those with cultural power. Modern readers of More will almost certainly feel that she was also too paternalistic toward the working classes she aimed to help.

One example will suffice: Prior describes the Cheap Repository Tracts produced by the Clapham Sect as perhaps More's "greatest contribution to the world of letters." The tracts were street literature written for the working classes by middle-class authors, and they were meant to provide "wholesome" alternatives to the broadside ballads favored by the poor—songs about sex and drinking, in other words. It is difficult at this remove to realize how radical even the idea of providing the poor with reading material was—reading means access to information, and information is power. So More's contribution to building the literacy rate of the nation is not to be underestimated. Still, one of the pervasive dilemmas of the evangelical temperament is that the same rigorous sense of personal moral rectitude that informs and sustains our great reform movements also makes it easy for us to sit in personal judgment of others who do not measure up to our high standards. The tracts often read as smarmy and judgmental, and More herself recognized this tendency: "I feel a little awkward about this same book. I am so afraid that a stranger will think me good! and there is a degree of hypocrisy in appearing much better than one is."

I am willing to forgive More the occasional lapse into excessive piety, however, especially since she also gives us this marvelous bit of domestic advice in The Cottage Cook: "If the money spent on tea were spent on home-brewed beer, the wife would be better fed, the husband better pleased and both would be healthier."

Hannah More's legacy is significant. Above all, she was on the side of the marginalized, every time. To live a life like that would be something, indeed.