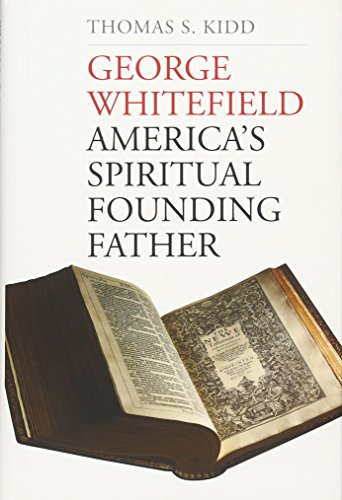 A new publication from the prolific pen of Thomas Kidd—professor of history at Baylor University—is always a welcome event. Though only 43 years old, Kidd has already produced several standard works on 18th-century America, focusing on the development of evangelicalism in particular.[1] His latest contribution is a scholarly yet readable biography of George Whitefield (1714-1770), the "Grand Itinerant" of the transatlantic First Great Awakening. Yale University Press published this book in time for the tercentennial anniversary of Whitefield's birth, which was celebrated in December 2014.

Someone has recently commented that to be labeled a "Christian celebrity" today is akin to being named the world's tallest miniature horse. It is an honor, to be sure, but the qualifier mitigates the sense of accomplishment. Whitefield, on the other hand, was truly famous, as well known in Anglo-America as George III and George Washington and with even better name recognition than his friend and publisher, Benjamin Franklin. Whitefield was not only the first internationally famous evangelist but also the first transatlantic celebrity of any kind. In analyzing this phenomenon, Kidd acknowledges the difficulty of discerning motives and suggests that Whitefield may have blurred the line at times between marketing and piety with his innovative techniques—a problem with us to this day—but he reminds us that theological conviction undergirded Whitefield's gospel preaching and promotion, that fame need not imply vacuity, and that some people become famous simply because they are extraordinarily good at what they do.

Reading the written transcripts and notes from Whitefield's sermons can certainly be no substitute for having heard his outdoor preaching, which attracted thousands. His rhetorical powers were such that the preeminent English actor David Garrick observed that Whitefield could "make men weep or tremble by his varied utterances of the word 'Mesopotamia.'" As Whitefield preached, Franklin eagerly performed calculations to demonstrate that even without amplification, more than 30,000 listeners could hear Whitefield at one time. For evangelicals of Whitefield's day, it was difficult to avoid the conclusion that a profound anointing rested upon his passionate proclamation of the gospel and the need for "new birth." He was not the key theologian or the greatest organizer of the long First Great Awakening—those designations belong to Jonathan Edwards and John Wesley, respectively—but he was the most famous preacher and the one who made Anglo-American evangelicalism a coherent movement, providing it with a common transatlantic identity.

How does Kidd's biography compare to what has come before it? Mark Noll says it now becomes "our fullest biography for the much-studied and much-debated eighteenth-century evangelist." Such a conclusion will surely surprise those evangelical readers who have come to regard the work of Baptist pastor and lay-historian Arnold Dallimore as unsurpassable. Dallimore's prolix two-volume biography, published in 1970 and 1980, is nearly three times as long as Kidd's crisp narrative. Professional historians, even if they admire the thorough detail of Dallimore's contribution, tend to view him as hagiographically oriented, driven more by the spiritual motivation of edification than careful analysis of social and religious context, and therefore out of accord with the accepted canons of contemporary historiography.[2] Academic historians, for their own part, have often analyzed Whitefield by advancing certain theses about his relationship to commerce (he was a peddler in divinity), celebrity (he was a divine dramatist), or politics (he primed America for its Revolution).

Kidd's work tries to mark out a third way. It is distinguished not by a provocative thesis nor by any groundbreaking discoveries but by his aim to produce the first scholarly biography that fully situates Whitefield in his primary context as the key figure of first-generation Anglo-American evangelical Christianity. Kidd's argument is that we will not rightly understand Whitefield's primary significance, nor understand how he viewed himself, until we see him within "the dynamic, fractious milieu of the early evangelical movement." Kidd's work succeeds admirably in this regard, deftly tracing the twists and turns of Whitefield's developing (and at times complicated) relationships with Jonathan Edwards, the Wesley brothers, the Moravians, the Anglicans, and the Scottish seceders.

As a respected and tenured university professor who is public and explicit about his evangelical commitments, Kidd intends to bridge a gap between the academic community and a popular evangelical readership. He openly admires Whitefield and yet is adamant that hagiography is not a legitimate option for the honest historian. One of the ironies of Whitefield being the object of debates about historiography and hagiography is that he himself once wrote, "In the accounts of good men which I have read, I have observed that the writers of them have been partial. They have given us the bright, but not the dark side of their character."[3] Avoiding both cynicism and sensationalism, Kidd presents a remarkably gifted yet sinful man who powerfully preached the glories of divine grace but failed to keep peace in many of his Christian relationships, often treated women poorly (including his longsuffering wife), and who owned slaves and advocated for the institution. Whitefield wanted slaves to be educated and evangelized, he opposed the slave trade, and he wanted to make the institution of slavery more humane and Christian. At the same time, he was the key figure in first introducing slavery into the colony of Georgia (where the practice had previously been banned), and it seems that he illegally allowed slaves to work on the property of his orphanage, "Bethesda" (before Georgia officially sanctioned slave owning). Kidd neither defends nor demonizes Whitefield, though he is appropriately clear in his disappointment and dismay.

It is a gift to the academic community that we have a full and straightforward scholarly biography, and it is a gift to the evangelical community that a historian of Kidd's caliber treats Whitefield so seriously and respectfully. The result is something everyone should celebrate: a careful presentation of a sinful saint who forever changed the face of American evangelicalism.

1. His works include The Protestant Interest: New England after Puritanism (Yale Univ. Press, 2004); The Great Awakening: The Roots of Evangelical Christianity in Colonial America (Yale Univ. Press, 2007); God of Liberty: A Religious History of the American Revolution (Basic Books, 2010); and Patrick Henry: First Among Patriots (Basic Books, 2011). Kidd is currently writing a history of colonial America for Yale University Press and co-authoring a narrative history of Baptists in America for Oxford University Press.

2. In a helpful corrective, Ian Clary acknowledges Dallimore's historiographical shortcomings but also cites his criticisms of Whitefield on slavery to demonstrate that filiopietistic, rather than hagiographical, is a more appropriate label for his work (Ian Hugh Clary, "Reformed Evangelicalism and the Search for a Usable Past: The Case-Study of Arnold Dallimore, Pastor-Historian," PhD diss., University of the Free State [Bloemfontein], forthcoming; esp. ch. 4).

Justin Taylor serves as senior vice president and publisher of books at Crossway in Wheaton. He is a PhD candidate at the Southern Baptist Theological Seminary and the proprietor of the blog, "Between Two Worlds," hosted by The Gospel Coalition. He and his wife have three children.