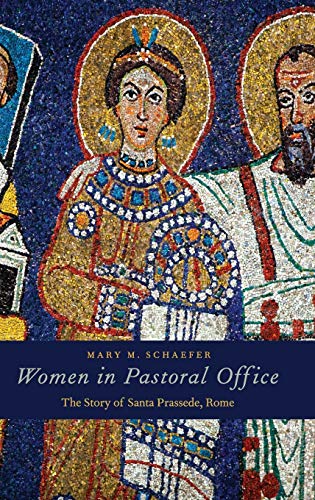 A 1st-century Christian and a 9th-century church in Rome.
January/February 2015

Once upon a time in the age of the apostles lived a family in Rome. When Peter came to the Eternal City, he dwelt in the house of the patriarch of this family, a senator, Quintus Cornelius Pudens. Peter led this man and his family to Christ and baptized them.[1] The senator's son, also Pudens, became a friend of Paul when he was imprisoned in Rome (2 Tim. 4:21), and it was Paul, the Apostle of the Gentiles, who baptized Pudens' wife and children. As an act of commitment to the Way, Pudens the second gave his house to be used as a gathering place for Christians. He raised his daughters, Potentiana and Praxede, in this illustrious Christian household, so it was unsurprising, albeit wonderful, that they followed the traditions of their fathers and dedicated their lives to the service of God's people, embracing even the vows of chastity and poverty.

At ecclesial gatherings held in their ancestral home, the sisters led the people in works of mercy, prayer, and praise. The gospel came in spirit and truth one Easter when Pius, Bishop of Rome, manumitted and baptized 96 slaves there in a font constructed by the sisters. Potentiana, at times called Pudentiana, passed away after 16 years of ministry, and Praxede bestowed her sister's name upon a building on her property. There, in times of persecution, Praxede hid Christians, feeding them with physical and spiritual bread and performing the final act of service when 22 believers were martyred, burying them in the cemetery of her family. Faithfully serving God into her eighties, Praxede was laid to rest there as well.

The property of Praxede, located northwest of the pope's seat on the base of the Viminale, came to be known as a titulus, an ecclesially designated space owned by a private family. Archaeological evidence indicates that this private dwelling was used by Christians during the first two centuries ce. Appearing in the historical record on an epitaph in 491, it receives mention again when presbyters from her titulus checked in to synods in 499 and 595. By the mid-8th century, it had become a papal station, a stopping point for services at which the pope presided during Holy Week. Santa Prassede (as it came to be know in Italian) was the location for Holy Monday, when the texts focused upon the women who anointed the feet of Jesus for his burial, drawing a connection to her act of service for the 22 martyrs. When it was selected as a station, its need for restoration became clear and Pope Hadrian I redeemed it from its ruinous condition in 783-84. It was not until the building program of Pope Paschal I (817-824), however, in which S. Prassede was relocated a short distance away on the Esquiline, that the church became what it is today, "one of the most intact, most virginal of all the early Christian and medieval churches of the eternal city," with one of the most important 9th-century mosaics in Rome. Paschal's intent was to make the church a liturgical hotspot for the Lateran section of the city (and, conveniently, the papal cathedral and palace). After an extensive relic service, Paschal officially dedicated S. Prassede on July 21, 819; it has continued to welcome officials and pilgrims to the present time.

Paschal's redesign of S. Prassede cast it as a three-aisled medieval copy of Constantine's five-aisled Old St. Peter's. The interior of fine marble revetment would have been well-lit, climaxing to an open timber roof. Halfway up the 36-meter-long nave, the Zeno Chapel opens to the east. In July of 819, Paschal presided over a service of dedication for the 2,300 relics he had brought to S. Prassede's Zeno Chapel from all points of the compass where pilgrims would travel. He employed the dual altar style invented by Gregory, in which a lower altar housed all the relics while a raised altar served as the location for public services. The officiant could preside over a service without being interrupted by the throngs of pilgrims coming to behold the relics.

The first chapter of Mary M. Schaefer's Women in Pastoral Ministry: The Story of Santa Prassede, Rome pieces together the data to construct the story of the sisters, and the second thoroughly describes and illustrates the structure of the church and its iconography. Schaefer pays special attention to the visual depiction of women. The titulus Praxedis was originally grouped with the basilica of St. Mary Major along with the basilica of her sister S. Pudenziana. The Christ figure in the apse of S. Pudenziana, dated to the early decades of the 5th century, says, "The Lord Protector of Pudens' faith-assembly." Surrounding him are two women among the apostles whom Schaefer identifies as Praxede and Pudentiana, dressed in the garb of presbyterae, or leaders of the church. In the chapel of S. Prassede, a mosaic depicts Christ and the 12 apostles along with Mary Theotokos and eight crowned women surrounding a marble urn. On the north wall, three apostles of the East face three female saints of Rome, the two sisters along with the martyr Agnes. As the Zeno Chapel is meant to represent the garden of paradise, Schaefer is impressed to find so many of both genders depicted here. Balance continues on the lower register of the north lunette where a lamb is flanked by two stags on one side and two does on the other. Below them are four women, the mother of Pope Paschal, Theodora, who is called an episcopa; Praxede; Mary, the mother of Jesus; and Pudentiana.The mothers alternate with virgins. Schaefer introduces the possibility that Theodora's headdress and title might indicate "one who held official church status."

In the main section of the church, Revelation and Hebrews provide the imagery for the triumphal and apsidal arches. Heavenly and earthly liturgy coalesce when worshippers are encouraged to remember the ascent of Christ the high priest (Hebrews) and to anticipate his return (Revelation). When believers enter, they see in the triumphal arch humans streaming toward the heavenly Jerusalem. On the left the Theotokos leads five apostles, and on the right— "daringly and uniquely," Schaefer writes—the patron Praxedes leads Peter and the rest of the apostles. In the apse, an extensive mosaic features the common picture of Christ giving the law to Paul and Peter, but here the mosaic features the two sisters with the apostles. Paul has his arm around Praxede, and Peter stands in this same introductio pose with her sister Pudentiana. These intimate stances indicate to Schaefer "a collaboration and close relationship of men and women."

Hence, in the first several chapters, Schaefer textually reconstructs this important piece of architecture and the stories of the women, primarily Praxede, who inspired it. The striking presence of the women in the mosaics leads to Schaefer's driving question: "Did the popularity of the Potentiana and Praxedes story about female householders who headed second-century house-churches correlate with real women engaged in ecclesial ministry? Is this the story of "a golden age of women's ecclesial ministry in the very heart of old Rome"? Schaefer has ushered her readers into the story of Praxede and her church to argue this point. To answer these questions, Schaefer embarks in the following three chapters on a foray into the topics of women's ecclesial offices inside and outside Rome and ordination rites for men and women. One should know to approach this book as a reference work, and in that sense, it is of great value and aid.

That value, however, may also be a liability with respect to the book's driving concern. If readers desire to know about presbyterae, diaconas, ordination rights, lectionaries, reliquaries, architecture, and many other things of historical and ecclesial significance, Schaefer has compiled an encyclopedic account. But despite the fact that she has such a beautiful example of such a dramatic topic, the book falls short of fully engaging its readers. One has to construct a narrative among the details to get a sense of the whole. Save the brief impassioned afterword, in most instances, the intrigue remains buried by the fastidious format of the book.

Moreover, the conclusions Schaefer does reach are so meager, they fail to inspire much celebration or despair (depending upon which side of the women-in-ministry question a reader falls). More than half of the book details the offices of the church, asking what posts women held both in and outside Rome and what the liturgical rites suggest about ordination for men and women to the various orders from subdeacon to pope. This well-supported investigation recovers a great deal of evidence that the church rejected the service of women, but only a few instances where women seem to have been leaders. Schaefer's careful attention to the intricate mosaics offers the possibility of women's leadership that she finds some support for in other sources, including the possibility that women might have presided over prayers of thanksgiving (eucharist) in the homes that they owned and that women were ordained in much the same way as men. But ordained to what? To ministries of service or presiding over communities of monastics, largely of women. In a Catholic milieu, this could be a powerful argument: sacred ordination of women persisted for centuries. For Protestants, Schaefer's argument seems merely to suggest traditional patterns: women in authority over women, or women doing the service-oriented tasks of the church. She recovers no explicit preaching or eucharistic ministry of women blessed and supported by the church.

In other words, the title of the book creates more excitement than its contents. This work does not unearth new and unavoidable evidence for extensive and powerful ordained leadership by women in Rome. Schaefer's extensive research and meticulous interpretation of text and art does, however, uncover the rich story of Praxede and show the beautiful church bearing her name, all the while teaching about the historical, architectural, and liturgical context that reveals its import.

The power of Schaefer's account of Praxede—the saint who "works," as her name indicates—might reside above all in its depiction not of a provocateur but of an everywoman. Praxede certainly had an unusual pedigree, birthed in faith by the apostles and friendly with the popes, and while the artistic evidence for her role as a presbyter is at least suggestive, what we do know (if there are truths in her hagiographic tale) is that she worked to serve others. She ministered to the people in her congregation, out of her familial earthly wealth supplying their physical needs, and out of her familial spiritual wealth meeting their spiritual ones. She did what countless other women have done and continue to do: serve where they are planted and give of what they have. This story, for all its lack of intrigue, may be one of the best arguments for equal participation of women in all ministries of the church. Women have served by bearing the fruit of the Spirit for millennia, and isn't this precisely the call Jesus ushers for all of his disciples?

1. While some stories of Peter in Rome "seem impossible to extract from the realm of legend," Markus Bokmeuhl grants that this one "bears thinking about a little more." Simon Peter in Scripture and Memory: The New Testament Apostle in the Early Church (Baker Academic, 2012), p. 147.