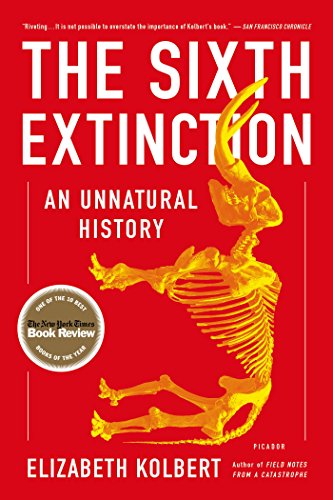 Herein lies one of the dangers of writing about climate change or any of the other planetary boundaries we're crashing against— ncluding biodiversity loss, ocean acidification, freshwater use, and soil depletion. Anyone who grasps the severity of the situation risks becoming a humorless scold. It's tough to stay optimistic about these things. And doomsayers don't get invited to a lot of parties.

In her New Yorker writing, Kolbert achieves a deft, graceful touch in writing about environmental catastrophes and the political dysfunction that enables them. Here too, she carries a wry sense of humor and a knack for the right flicks of reporting color. Her sense of pacing keeps the book brisk, and makes forays into the history of science surprisingly lively.

Present-day readers might take extinction as an obvious idea. In fact, it's a relatively recent discovery. It was the mastodon's brick-sized molars, distinct from elephants', that led George Cuvier to discover the concept of extinction at the close of the 18th century. We now know that proboscideans, the group that includes elephants, mastodon, and mammoths, comprise at least 170 distinct species. Fossil studies have revealed that the rise of mammals is a recent event, predated by proliferations of reptiles, amphibians, and ammonites, invertebrate molluscs that once filled the world's seas.

What's notable is not just the scale of changes that humans are inflicting but the unprecedented speed at which we are making these changes. "Just as it makes a big difference to your blood chemistry whether you take a month to go through a six-pack or an hour, it makes a big difference to marine chemistry whether carbon dioxide is added over the course of a million years or a hundred," Kolbert writes. "To the oceans, as to the human liver, rate matters."

From the first smokestacks of the Industrial Revolution until now is barely a flicker of time in evolutionary terms, and many species cannot adapt to the changes the revolution has unleashed. Kolbert travels to the Brazilian Amazon to see just how intricately species have evolved to fit particular niches. She tracks one (among dozens) of the tropical species of army ants, Eciton burchelli. As these ants spend their life marching in line, an entire class of birds has evolved as "ant-followers," eating insects the ants flush out of the leaf rot as they proceed on their way. In turn, certain butterflies feed on the birds' droppings, while mites have adapted to hitch rides on the ants' legs. More than three hundred species live in association with these ants, according to American naturalists.

This delicate balance is disrupted as the Amazon is carved into farmland interspersed with "protected" fragments. Just as natural islands tend to have fewer species—they cannot sustain the diversity of the mainland—the "islands" of the Amazon, fragmented by deforestation, cannot support the diversity of unbroken rainforest.

Nearby in Peru, Kolbert observes how rising temperatures have essentially forced species adapted to particular climates to "climb" up the Andes mountains at approximately eight feet a year. This is a problem, since there's not as much mountain to go around at the top as at the base.

In "The Thing with Feathers," her concluding chapter, Kolbert tracks the sometimes-Herculean efforts of people trying to rescue endangered species. Pilots fly ultralight aircraft to teach baby California condors, raised in captivity, how to migrate south for the winter. Others perform ultrasounds on rhinos or carry the sperm of Hawaiian crows on commercial flights to support the breeding of these threatened birds. Referring to the Neanderthals our species killed off in Europe, Kolbert says we are "the sort of creature that could wipe out its nearest relative, then dig up its bones and reassemble its genome."

Clearly we are capable of great love for other species and at least a vague sense that they matter, in ways we can't always articulate. And yet it's not remotely enough to stop the extinctions. As Kolbert puts it in a slightly ambiguous line, "It doesn't much matter whether people care or don't care. What matters is that people change the world."

We are used to hearing a feel-good version of this phrase that might appear on mission-trip T-shirts: "Be the change you wish to see in the world." That's not what Kolbert means. For her, the change we wreak is overwhelmingly negative for every species we contact, even when we don't know we've contacted them. And our actions matter more than our intentions, no matter how virtuous they might be.

There is no postscript offering solutions tacked on at the end of the book, because solutions require a discussion just as long and complicated as a diagnosis of this mass extinction. Our harm goes to the core of our economies and habits of being in the world—burning fuel, traveling, claiming land and water and skies for our purposes.

Interestingly, the book's only biblical allusion (the only one that caught my eye, at least) comes in its final words:

Right now … we are deciding, without quite meaning to, which evolutionary pathways will remain open and which will forever be closed. No other creature has ever managed this, and it will, unfortunately, be our most enduring legacy. The Sixth Extinction will continue to determine the course of life long after everything people have written and painted and built has been ground into dust and giants rats have—or have not—inherited the earth.

So much for the meek inheriting the earth in Matthew's gospel. That seems to raise the question: Is this the only way to view the universe? If we take seriously the warnings of geologists, biologists, archaeologists, and others, must we conclude with Kolbert that our race's "most enduring legacy" is widespread damage? The arc of history is long, and it bends toward giant rats?

I don't know if there's a "Christian way" to read this book that lets one dismiss its disturbing conclusions. I started out looking for ways to measure The Sixth Extinction against various eschatologies, theologies of the end of the world that might provide a more uplifting vision. But maybe that's the wrong place to start. Maybe the place to start is a theology of creation. The world is fundamentally good, in the words of Genesis, and people are meant to somehow steward creation, however we define that duty. Stewardship begins with trying to understand our fellow creatures and what our habits are doing to them.

Our discoveries may leave us bewildered and troubled, but they can still be acts of faithfulness. In that sense, Kolbert's book is a work of stewardship. Understanding may be thin comfort in an age of mass die-offs. But it's a place to start.

Jonathan Hiskes is a writer at Bastyr University in Seattle. His reporting has appeared online at The Guardian, Mother Jones, Grist, Sustainable Industries, and Comment.