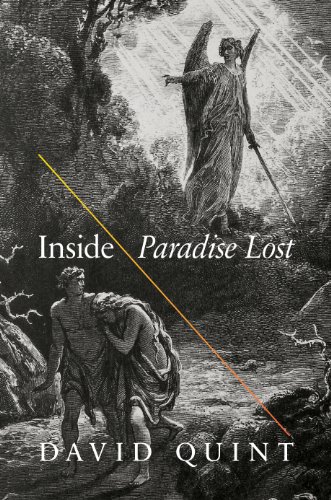 Of the Devil’s Party?

Milton and his “epic to end all epics.”
January/February 2015

More than a century after John Milton penned Paradise Lost, the Romantic poet William Blake noted that, as "a true Poet," Milton was "of the Devil's party without knowing it." Other Romantic contemporaries, such as Percy Shelley, followed suit and applauded Milton for creating a character who supersedes his Creator. Even apart from the characterization of the devils, Milton's poem prefigures the Romantic idealization of poetry as salvific. David Quint's Inside Paradise Lost depicts a Milton who rewrites his poetic predecessors, dueling with Homer, Virgil, Ovid, and even Paul. While the book underlines the ways that Milton alludes to a vast array of epic writers, it shows Milton constantly contesting these voices and attempting to trump them for his own glory. Perhaps the most startling revision is of biblical texts, especially for a writer who, in some places in Paradise Lost, creates images that reveal truth, such as the demons' metamorphosis into hissing serpents. Yet, in an off-handed comment, Quint summarizes the problem with Milton's poetry: it is "more Miltonic than Christian," which, of course, situates him yet again within the Devil's Party.

Quint's goal is to show how Milton writes the grand finale for the epic tradition with a poem that defies the usual subject matter of epics:

The message of Paradise Lost is: make love, not war. The poem that pretends to begin the epic tradition by retelling events that preceded those of all earlier epics would also end the epic genre by condemning its traditional subject matters, war and empire.

Quint opens his introduction with this claim. (Side note: this is one of the many times that Quint neglects Dante's Divine Comedy, the epic that chose love as its subject matter over three centuries before Milton's poem.) Without drawing neat lines between the two, Quint dichotomizes envy and charity, the city of man versus the city of God, the devils against God, and he builds his argument from Milton's allusions to preceding works, ranging from the expected canonical lineup to a dozen or more lesser-known epics, such as Luis de Camões' Os Lusíadas (1571) and Torquato Tasso's Gerusalemme liberata (1581). The breadth of references testifies not only to Milton's brilliance but also to Quint's thoroughness. Yet it is also Milton's virtuosity that tempts him into dangerous arenas. While Quint argues that Milton's focus is marital reconciliation and avoids any discussion of the "anxiety of influence" (though he thanks his Yale colleague in the acknowledgements), Milton's poetry is at war with all who have come before him.

Through a concentration on literary forerunners, Quint characterizes this new battlefield several times—showing how Abdiel switches the heavenly battle from physical violence into verbal sparring; spending a chapter on the character of Ulysses, the paragon of rhetorical manipulation, as a model for Satan; and reading Milton's allusions to Icarus and Phaeton as metaphorical challenges for the poet to make his own successful flight "lifted in spirit on the wings of verse." The idea of a "successful Icarus" seems outrageous, for the tale is a warning about the limits of human beings, yet Quint regards Milton's use of the story in just such a light. Similarly, by connecting Ulysses and Phaeton both with Satan, Milton showcases the potential for language to tempt one towards self-exaltation, a warning seemingly unheeded. Relying on his knowledge of contaminato, the Renaissance equivalent of intertextuality, Quint references the Homeric and Ovidian accounts of these stories as well as their retellings in Virgil, Dante, and other sources.

I noted earlier that Quint ignores the places where Dante's epic would challenge his assumptions about the genre—after all, the subject matter of The Divine Comedy is love; Dante did it first. In the handful of times that Dante's epic is mentioned, Quint makes small errors regarding the narrative, such as when he writes that Dante's Ulysses "never made it home" (the character in fact returns to Penelope and Telemachus only to depart a second time). Also, Quint neglects to separate his interpretation of Dante's Empyrean from Milton's classification of it as a Paradise of Fools. However, there is no need to judge Quint's book by what it is not. Reading it has made me realize that George Steiner should not have stopped with his division of the literary world into "Tolstoy or Dostoevsky" but continued to divide it into "Milton or Dante."

Unlike Dante, Milton appears, in Quint's portrayal, as a rather incongruous poet. Initially, I was befuddled by many of Quint's assertions regarding Milton. However, I soon realized it was because I sought a coherent picture of the author and his poem as well as an understanding of how Milton's interpretations align or dissent from Scripture. Quint is unconcerned that Milton contradicts himself and preaches orthodoxy comfortably alongside heresy. For instance, in his discussion of Milton's depiction of the demons in Book II, in which Quint considers how the poet's portrayal of evil fascinates rather than disgusts the imagination, he declares that "idolatry itself is a kind of poetry," an inverse Hallmark-card conclusion that draws a flippant close to his sophisticated assessment of the dilemma. Or later, when Quint elucidates Milton's theology of light, he argues that Milton acknowledges the difficulty of seeing an invisible God through his works, yet also, because of the poet's blindness, Milton accesses spiritual sight and sees light within himself. Through Quint's sporadic assertions about Milton's theology, the poet becomes an amalgam of sorts. Milton is put forward as very "Protestant," anti-Catholic, Arminian, Arian, disbelieving in the Holy Spirit, contentious of materialism vis-à-vis Lucretius yet embracing the discoveries of science à la Galileo, and seeing humans as spiritually self-sufficient though socially dependent. Some of these multiple Miltons could be reconciled while others seem flatly contradictory; in any case, Quint is not concerned with resolving the tensions.

In his introduction, Quint defends Milton as a Christian humanist, championing him as a poet of human freedom and moral agency. The "largest claim" Quint asserts is in his sixth chapter, where he focuses on this aspect of Milton's poetry as it regards Adam and Eve's relationship. Here Quint makes the interesting claim that if either Adam or Eve had played each other's roles, the fall would not have occurred. Unfortunately, this chapter also includes what I find the most perplexing line in Quint's book: "the new realm of human autonomy that is specially instanced in [Adam and Eve's] marriage feels like Christian freedom." I haven't yet unraveled how autonomy is exemplified in their marriage, nor how that constitutes Christian freedom. The title of the chapter is "Getting What You Wish For: A Reading of the Fall," a summation of Milton's philosophy that stresses license and seems more humanist than Christian.

While much of the book is written in a high style reminiscent of Milton's poem, Quint's sixth chapter abounds in colloquial language. He describes Milton's paradise as "sex, poetry and food: who could ask for anything more?" In these sections, one can imagine the professor rapping with his students over the dilemmas in Book IX, as he writes, "Eve, Satan proposes, should be taken to a heavenly Hollywood from her small-town drugstore counter in Eden and turned into a star or goddess at a truly universal studio." Quint updates the problems in the text in terms that teachers use and students need. Despite the many troubling lines in the monograph, this book would be useful to teachers of great texts and interdisciplinary courses who want to highlight how Milton converses with the canon.

And for all its theological oversights, the book provides a wealth of critical insight on Milton's poem in regard to early epics, which is its primary aim. Inside Paradise Lost unveils how intention and method are sites for virtue and vice. Though Milton desired not to be of Homer's or Virgil's party, and never intended to be of the Devil's, his longing to attain glory through the "epic to end all epics" placed him in Milton's party, which really amounts to the same thing.

Jessica Hooten Wilson is the Associate Director of Honors at John Brown University and an assistant professor of creative writing.