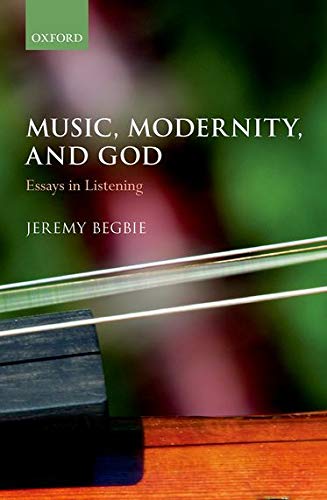 The man who has many answers
is often found
in the theaters of information
where he offers, graciously,
his deep findings.

While the man who has only questions,
to comfort himself, makes music.

In this brief poem from her 2012 collection A Thousand Mornings, Mary Oliver makes room for our doubts and questions and uncertainties, things not generally welcomed in "theaters of information" such as government or news media or the university. Such doubts and questions have likewise been suspect in the Christian church, despite the biblical record filled with such inquisitive, sometimes even doubtful, persons as Moses and Gideon, David and Jeremiah, Mary and Nathanael, just to name a few.

So what can we do if we have questions about theology? Mary Oliver's answer: make music. Jeremy Begbie agrees. In Music, Modernity, and God: Essays in Listening, Begbie invites those of us who have questions about the modern world—and particularly questions theological in their nature—to turn to music and really listen to it. Yes, listen to music itself, and also listen for the ways music has embodied our questions—about God, nature, humanity, technology, and more—and sought to answer them. This is not an escapist listening, but rather a listening to enter into a deeper understanding of God, the creation, and humanity.

Begbie broadens the scope of our thinking about the intersections of music and theology by asking not only "What can music learn from theology?" but also "What can theology learn from music?" His primary audience is theologians, not musicologists, though the book should be read by musicologists, too, as well as anyone else interested in the interrelationships of music and theology. Begbie summarizes his project thus:

How might an engagement with music, and discourse about music, contribute to the formation of theological language, and to a more faithful, enriching, and fruitful "inhabiting" of theological language already in use? And, wrapped up with this: how might this contribution be realized in a way that does justice to the theologian's obligation to respect both the "primacy" of particular language uses and the distinctive character of musical practices?

He frames this work with particular attention to the mindsets of modernity, addressing in his examples such aspects of modernity as autonomy and human freedom; the conception of the human standing in opposition to the physical environment; the linear understanding of time; and the favoring of non-theological metanarratives. Begbie argues that music is capable both "of providing a kind of 'theological performance' of some of modernity's most characteristic dynamics" and "of yielding highly effective ways of addressing and moving beyond some of the intractable theological aporias that modernity has bequeathed to us." In sum, "This book is an attempt to allow music the 'opacity of its own voice' in the midst of theological renderings of the story of modernity."

Begbie argues for two significant benefits of such an approach. First, that thinking musically can help us consider questions of God, humanity, and nature and the ways these interrelate in ways distinct from those so ingrained in a modern sensibility. Second, that discourse about music can provide new language for theology and thus enrich current patterns of theological language.

In addition to its fascinating content and convincing call for a new approach to the interaction between music and theology, Music, Modernity, and God is exemplary for the way Begbie models a dialectical approach to scholarship. Witnessing Begbie in dialogue with leading scholars (both past and present) in musicology, theology, philosophy, aesthetics, and other fields is a gift. Whether or not one agrees with all of his particular conclusions, there is great value in listening to this virtuosic conversation, at once insightful and gracious, attentive and inquisitive, indeed musical and theological.

After a brief introduction framing his foundational ideas and setting forth the importance of music for the study of theology, Begbie presents five in-depth studies of particular figures or themes in relation to the development of modernity. Although the essays are roughly chronological, Begbie makes no effort to present a cohesive narrative. As his subtitle implies ("Essays in Listening"), these are individual case studies that demonstrate various connections with his thesis and approach. While Chapters 2-6 are beneficially read in order, and significant common themes emerge through such a reading, each also stands alone as treating one particular topic in music and its relation to developing concepts of modernity.

Chapter 2 focuses on John Calvin's writing about music, arguing that Calvin was one of the first to reflect a modern conception of the way music relates to the created order. Begbie demonstrates that while Martin Luther's conception of music was reflective of the medieval mindset in which music was understood primarily in relation to creation, and, as a result, the Creator, Calvin's view was reflective of early modernity, with music understood primarily anthropologically and in relation to language. Begbie introduces here questions about the relationship between music and language that are fundamental to the remainder of the volume: is music dependent on verbal language for its meaning, or does it possess its own meaning apart from, though often complementary to, verbal language?

In Chapter 3, Begbie discusses the music of J. S. Bach in relation to three main loci of theological understandings of the development of modernity: subjectivity and creativity, order and openness, and time and eternity. This chapter takes the form of an extensive review essay responding to two recent books on Bach's passions (especially the St. Matthew Passion) and modernity: Karol Berger's Bach's Cycle, Mozart's Arrow: An Essay on the Origins of Musical Modernity (2007) and John Butt's Bach's Dialogue with Modernity: Perspectives on the Passions (2010).

Chapter 4 outlines the debate between composer Jean-Philippe Rameau and philosopher and composer Jean-Jacques Rousseau. The debate focused on different understandings of naturalness in music, with Rameau's centered on harmony and the naturalness of the "sounding body" and Rousseau's centered on melody, particularly as it grew out of and reflected text. Begbie argues that Rameau's vision of music was grounded in creation and the natural world, while Rousseau's (as reflective of modernity) was strongly anthropological and based in language. Begbie then reflects on what our attention to the debate between Rameau and Rousseau can contribute to understandings of natural theology. The chapter culminates in an extended discourse on how music "might play a part in a theology that seeks to bear witness to the non-godforsakenness of creation even under the conditions of sin."

In Chapter 5, Begbie continues his focus on the relationship between music and language with a discussion of early German Romanticism, an era when music was celebrated precisely for its distinctiveness from words. In the early Romantic sensibility, music was seen as the ideal art form because its expressiveness was not tied to words and concepts. Music was seen as a way of striving for the infinite, giving expression to humanity's yearnings and longings beyond the scope of words. The chapter centers on Begbie's interactions with and response to Andrew Bowie's Music, Philosophy, and Modernity (2007).

In Chapter 6, Begbie most comprehensively offers renewed understandings of theological concepts in light of music. Begbie presents music as an alternative to the visual-spatial perception of the world that he argues is characteristic of modernity, applying these concepts especially to the way we articulate human freedom in theological perspectives. His central points about the distinctive nature of music include: 1) the ability of a sound to be detached from the physical object that makes it—that is, a sound is made by a physical object, but is not the object itself; 2) our perception of sound space as different from our perception of visual space—in particular, that more than one sound can occupy the whole of our spatial realm concurrently; and 3) the complementary nature of tones in a resonant order, in which the integrity of each simultaneously sounding tone is not only preserved but also enriched by the other tones.

Through dialogue with Nicholas Cook's Analysing Musical Multimedia (1998) in Chapter 7, Begbie argues that neither music nor language ever operates in complete isolation from other arts or cultural experiences. In particular, music is always interacting with language.

Within the context of these theoretical perspectives, Chapter 8 presents a theological exploration of the multimedia nature of music and language. Among Begbie's significant conclusions is the assertion that "the possibility of music contributing to an enhanced language use, theological or otherwise, depends on its being a means whereby we fruitfully 'indwell' (albeit pre-conceptually and prelinguistically) the world in which we, as physical and social creatures, are embedded." After such a convincing theoretical framework and insightful examples throughout the volume, the way Begbie presents his conclusions in Chapter 8, with only two brief examples to illustrate them, feels incomplete. Furthermore, Begbie does not sufficiently engage the issue of music in performance or the types of music he sees as best contributive of theological discourses. He presents this final chapter as very preliminary, with many implications of his theses left unexplored.

But this perceived lack of significant concluding examples could, in fact, be more a challenge of the volume's organization than its content. After the introduction, readers may benefit from turning to Chapters 7 and 8 before the case studies in Chapters 2-6. In laying out Begbie's theological and methodological approach, while also arguing for the significance of such an approach, the final two chapters provide a significant framework not only for studies in the future by Begbie and others but also for the examples discussed so well and extensively in the book's earlier chapters. And, in larger perspective, the open-endedness of the final chapter is perhaps appropriate, leaving us still with questions, but also better equipped to turn to music to aid us in pondering them.

Mark Peters is professor of music at Trinity Christian College in Palos Heights, Illinois. His research focuses on the sacred vocal music of J. S. Bach and on U2.